One of the most impressive parts of the project was the tailrace tunnel.  Although largely invisible, the tunnel was an enormous construction project and a critical component of the power plant's operations.  The tunnel is 2,200 feet long, beginning at the powerhouse and ending at a portal in the gorge near the base of the Horseshoe Falls.  It was at this portal that water diverted to the powerhouse from the Niagara River was discharged and rejoined the river. 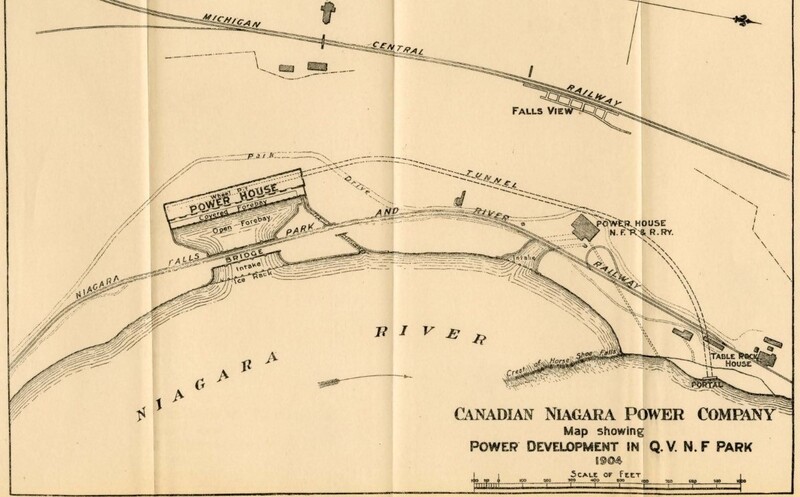 A map showing the Canadian Niagara Power Company powerhouse and tunnel, 1904.  The tunnel runs from the powerhouse to the base of the Horseshoe Falls, near Table Rock House. 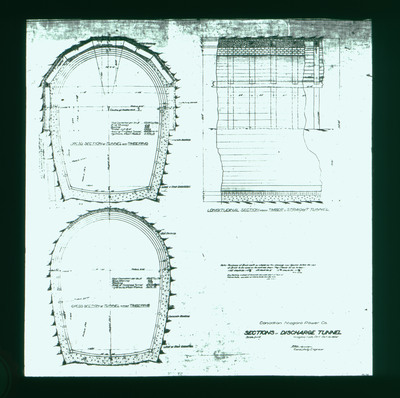 Engineer's drawing of sections of the discharge tunnel, 1902.

Initially, the design called for two separate tunnels emerging from the powerhouse, which were to be joined at a later point.  This would enable the plant to continue operating while one tunnel was being repaired or inspected, as the alternate tunnel would be available to carry the discharged water.  Although practical, this design would cost more money.  It was decided to build a single tunnel.   In order to reduce the risk of the tunnel being unavailable due to repairs, a great deal of effort was put into the tunnel's design and construction.  It was imperative that the tunnel be able to withstand the continual force of the water with minimal damage to its structure.

As always, the aesthetics of the design were important.  The portal, where the water was discharged into the river, was carefully designed so that the water was discharged near the river's level.  This avoided the unappealing sight of water discharging well above the river, as it often did on the American side.  In order to accommodate this design, a sharp drop at the end of the tunnel was required  so that the water could exit under the surface of the river. 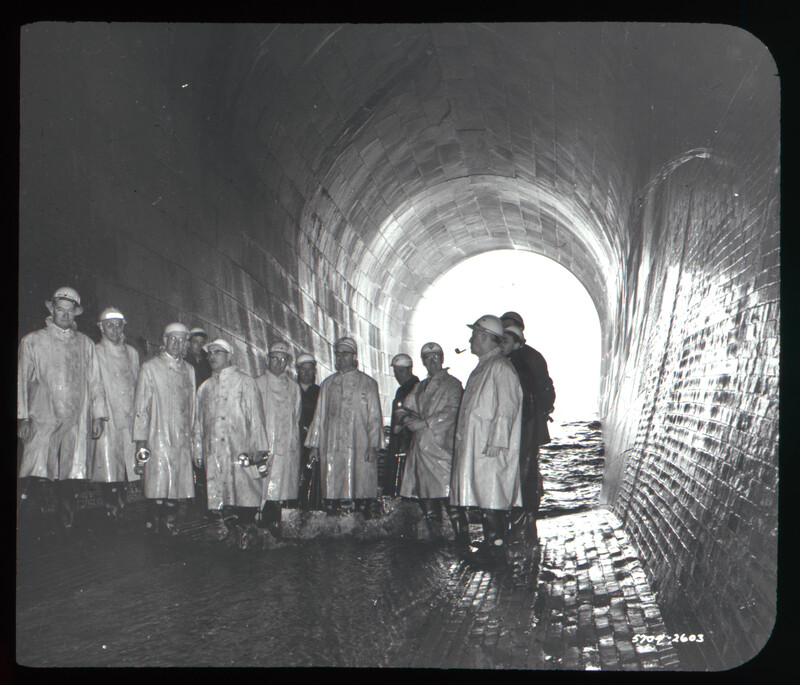 A group of men near the portal of the tunnel, where the water rejoins the river, 1957.  There is a sharp drop at this point.  This ensured the water exited near the river's surface. 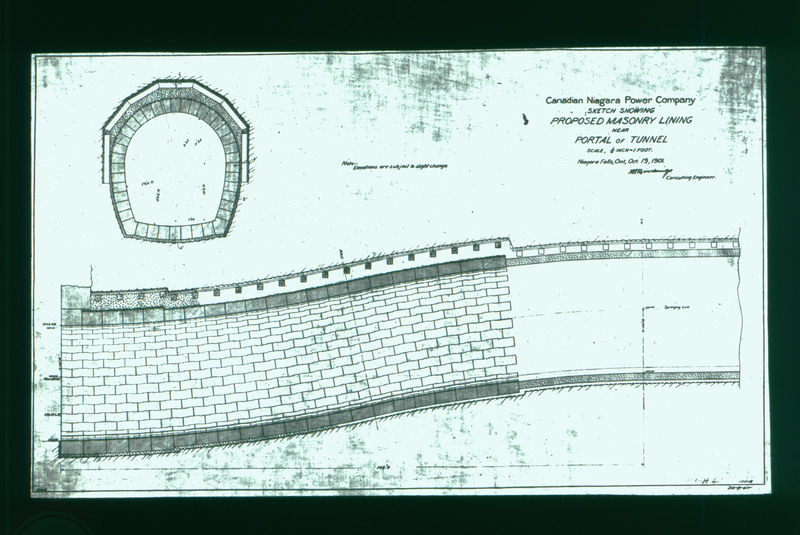 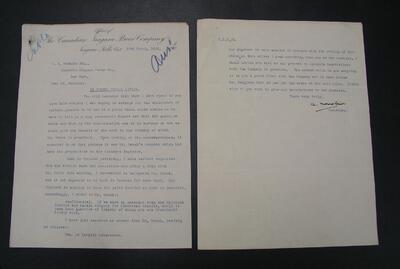 A letter from A. Monro Grier, Secretary of the Canadian Niagara Power Company to W.B. Rankine, March 20, 1902.  The letter concerns the purchase of granite for the tunnel portal lining.

Excavation for the tunnel began in 1901 and was completed by late 1902.  At this point, much consideration was given to the construction of the interior of the tunnel.    The tunnel surface needed to be as smooth as possible.  Water would be flowing through the tunnel at  a rate of 30 feet per second.  Any irregularities on the surface would erode the tunnel prematurely.  A choice had to be made between using concrete or brick.  The Niagara Falls Power Company in New York had used brick in their tunnel, and the original design for the Canadian Niagara Power Company's tunnel had called for four layers of brick.  In the end it was decided that  a combination of the two materials would be used.  The walls and floor would use concrete covered with a single layer of brick.  The brick selected was of a higher quality than the brick that had been used in the Niagara Falls Power Company's tunnel.   The tunnel was completed in 1904. 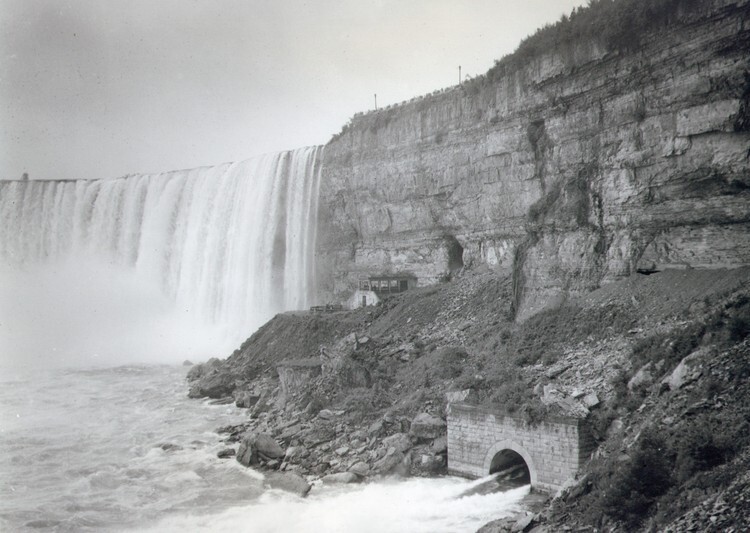 The portal of the tailrace tunnel.  Courtesy of the Niagara Falls (Ontario) Public Library and Niagara Parks Commission. 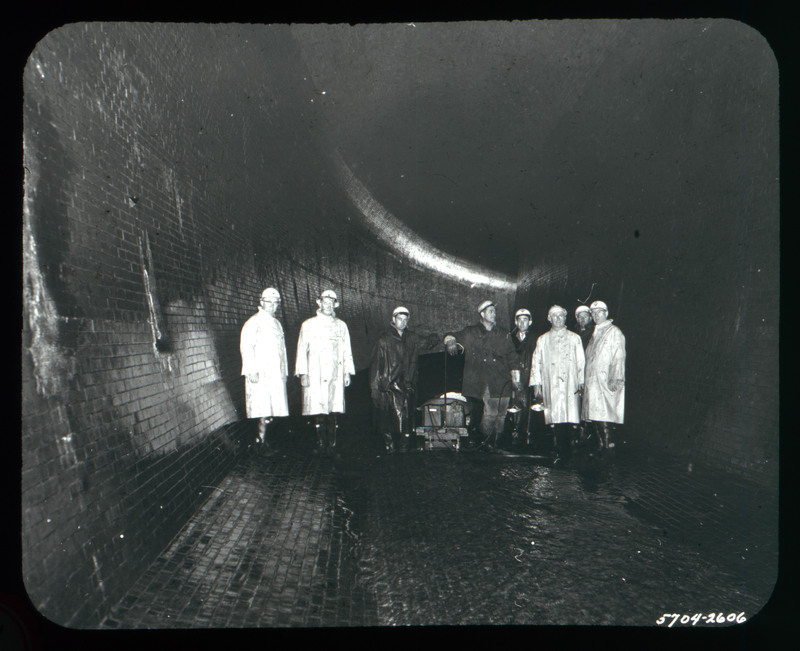 In 1957, the Rankine Generating Station temporarily shut down operations so that the discharge tunnel could be inspected and any necessary repairs made.  It was found that the tunnel was in excellent condition, even after 50 years of operation, and very little maintenance was required.