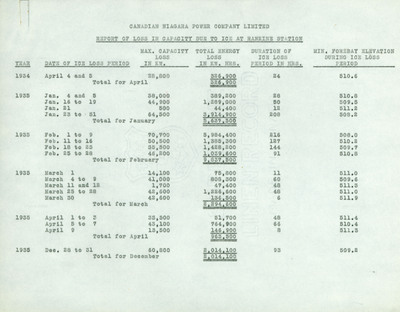 During the winter months, ice in the Niagara river could be a problem for the hydroelectric generating stations.  The Rankine generating station was no exception.  In fact, their problems with ice were often made worse by the fact that they were situated back from the shoreline.  Instead of being able to draw water from the river in the direction it naturally flowed, the water had to turn about 90 degrees to pass under the roadway bridge before entering the forebay.   Ice and slush would accumulate in the forebay, which would in turn clog the penstocks and allow very little water to reach the turbines. 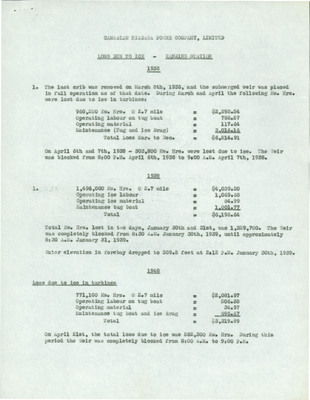 A report of loss due to ice at the Rankine Station, 1938-1941.  The report includes the amount spent on tug boat operation and maintenance.  The total loss on this report is over $17,000.

Efforts were made to break up and divert the ice.  Sluiceways at the forebay were intended to divert the ice into a channel that would take it back to the river and away from the main intake.  However, the ice and slush accumulations continued, even with the help of a powerful electrically driven tug boat in the outer forebay used to break up the ice.   The tug and its operators were known as the "Canadian Niagara Navy".  When ramming the ice with the tug was ineffective, dynamite was used to break it apart.  There were times when even the dynamite did not help.  In an attempt to alleviate the problems, modifications were made to the sluiceway, intake and ice shield, which improved the situation.  Nonetheless, ice problems persisted.  Matters were made worse by modifications made to American generating stations that diverted ice from their shore to the Canadian shore.

Over the years, the water level in the river had decreased.  This was partly due to a natural decrease  in water levels in the Great Lakes, and partly due to increased water diversion from newer power plants above the Rankine station.  A remedial project to rectify this situation was undertaken in 1936 and 1937.  A submerged weir was constructed just upriver of the station.  It was hoped that this would help divert ice from the forebay, but also increase the waterflow in the area and restore the water level at the intake to the level it was when the Rankine station opened in 1905.   The weir also had the added benefit of increasing the waterflow over the Horseshoe Falls near Table Rock, thereby increasing its scenic attractiveness.  Unfortunately, the weir did not eliminate the ice problems. 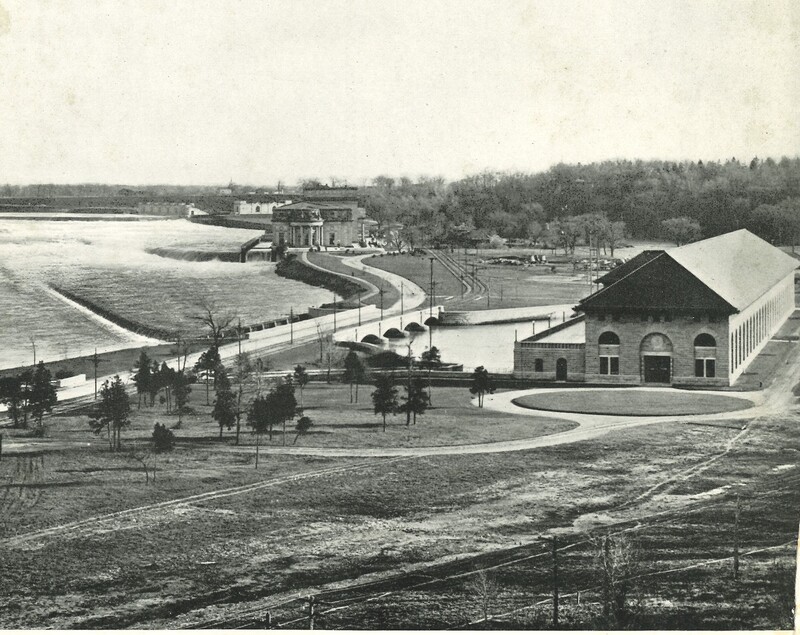 The Rankine Generating Station, 1937.  Water can be seen flowing over the newly constructed weir.

Eventually, the situation improved with new developments in the 1950s and 1960s.  In September of 1957, the International Control Dam opened.  This allowed the flow of water and ice to be more easily controlled and directed.  However, it did not decrease the volume of ice in the Niagara River.  A development in 1964 finally solved the worst of the ice problems.  At this time, a joint project between Ontario Hydro and the New York Power Authority was implemented.  An ice boom was placed across the Niagara River where Lake Erie drains into the river.  This held back a significant amount of ice from entering the river.  It was removed in the spring when any ice loads that had not melted could be safely released into the river.  The project was so successful that it became an annual occurrence, and the "Canadian Niagara Navy" was no longer needed.