Niagara Falls Power Company powerhouse, Niagara Falls, New York, 1897.  William Rankine developed this powerhouse prior to the construction of the Canadian Niagara Power generating station.  The two buildings are similar in many ways. 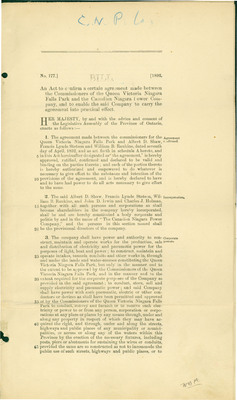 The Canadian Niagara Power Company was founded in 1892 when an agreement was forged between Company representatives, including Rankine, and the Commissioners of the Queen Victoria Niagara Falls Park .  This agreement gave the Company rights to draw water from the Niagara River at the south end of Cedar Island, by extending the channel forming the island.  This water would be used to generate either electrical or pneumatic power.  In addition, permission was given to construct buildings at the park's edge.    However, it was specified in the agreement that precautions must be taken to conserve the natural features of the park, and all plans were to be approved by the commissioners before work could proceed.

This stipulation reinforced the importance of well-designed structures that would not detract from the area's natural beauty.  The rapid development of industry on the American shore of the Niagara River in the latter part of the 19th century resulted in an unsightly landscape.   There was concern that so much water would be diverted for power generation that the flow of water over the Falls would be significantly curtailed.  This started a movement in both the United States and Canada to preserve the natural beauty of Niagara Falls and the surrounding area. 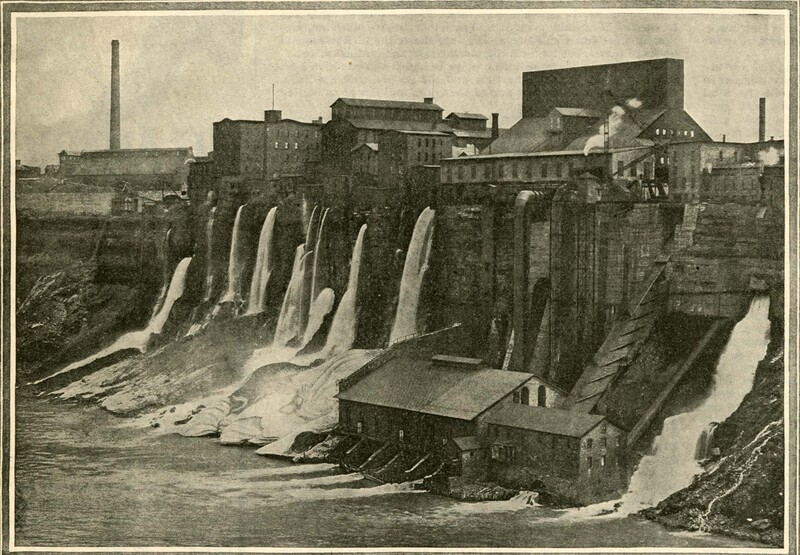 Industry at Niagara in the late 19th century

The Queen Victoria Park in Niagara Falls required funds in order to support their mandate of preserving the natural environment around the Falls.  In return for granting  water rights and construction permits, the park commissioners would use the rental fees paid by the Company to fund their operations.  In the early years of the park's development, these funds were critical to their operation.     A rental fee of $25,000 was to be paid to the park commissioners annually for the first ten years of the contract.  After that, the amount would increase $1000 per year until the annual fee was $35,000.  This fee would be maintained until the conclusion of the franchise period, which was set at 100 years.  The company could opt out of the contract with three months notice during the first 20 years of the lease. 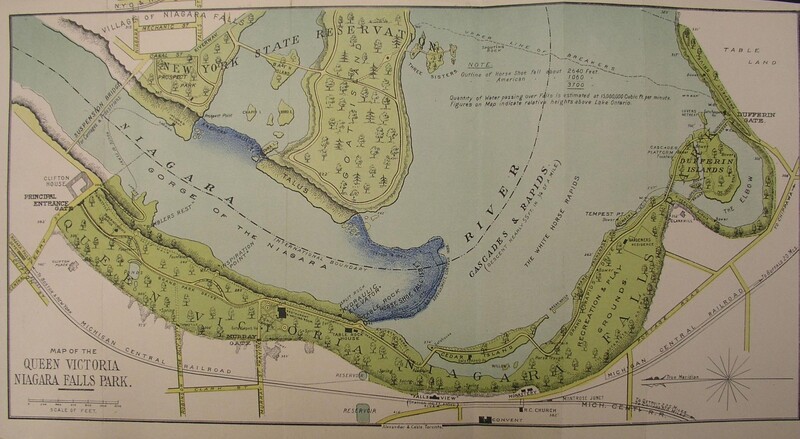 A map of Queen Victoria Niagara Falls Park, 1888.  The map shows Cedar Island just above the Horseshoe Falls.  The channel between the island and the Canadian shore is where the Canadian Niagara Power Company drew water for power generation.  Eventually, this channel was filled in with the construction of the powerhouse and the island became part of the mainland.