Map of the Battle of Chippawa

Just after midnight on July 3, 1814, the first American troops crossed the Niagara River towards Fort Erie.  The brigade was commanded by Winfield Scott.  A British patrol guard noticed the Americans crossing and took off on horseback to warn British Commander Phineas Riall.   Meanwhile, two more American units followed Scott's across the river to Fort Erie.   These additional two brigades, under the command of Eleazer Ripley and Peter Porter, landed on the Canadian shore by noon and brought the total number of American troops at Fort Erie to 3500.  The number of men stationed at Fort Erie was only 137, and the British quickly surrendered after the arrival of the American troops.    The Americans were now able to advance towards Chippawa.

When Major General Riall learned of the American landing, he promptly ordered the Royal Scots be sent out to Chippawa and embarked on horseback to meet the enemy, gathering as many troops as possible from outposts along the way.   British forces under Lieutenant Colonel Thomas Pearson were able to delay the American advance by damaging the bridges along the American route, thereby gaining time for Riall to gather additional reinforcements.

The two opposing sides finally met at Chippawa on July 5.  Riall, believing the American force to be largely composed of militia, felt that the smaller British force could defeat them.   However, once the Americans were engaged in battle Riall realized he had made a mistake.  It was clear that the American force was comprised of regular troops and was a much greater threat to the British than expected.

The battle progressed poorly for the British.  Gaps formed between the regiments, which the Americans were able to exploit.  Most of the British officers were wounded, including Lieutenant Colonel John Gordon of the Royal Scots and Lieutenant Colonel the Marquis of Tweeddale of the 100th.  The British eventually withdrew and removed the plank flooring from the bridge over the Chippawa River to slow the American advance.  The British reported 148 men killed, 221 wounded, and 46 were missing or taken prisoner.    The Americans reported a total of 327 killed, wounded, and missing.   Although the Americans had not advanced far into Upper Canada, they were pleased with their victory at Chippawa. 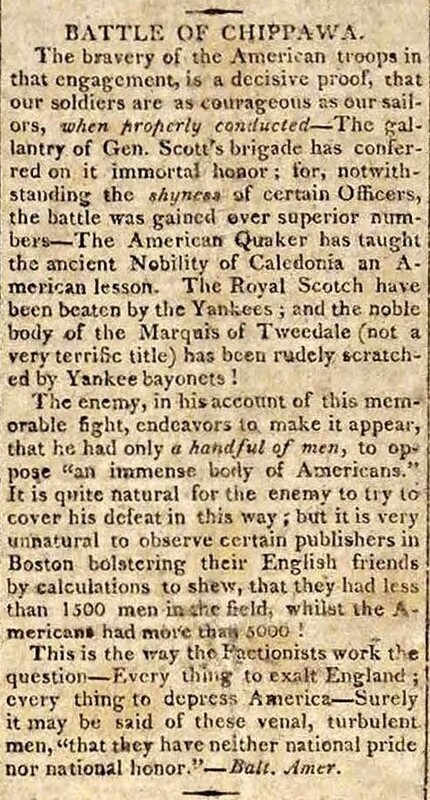 A clipping from the American newspaper the Independent Chronicle, commenting on the American victory at Chippawa, August 4, 1814.