After their victory at Chippawa, the Americans intended to continue their advance into Upper Canada.  But first, both the Americans and the British needed to regroup after their engagement at Chippawa.  The British retreated to Fort George in Niagara.  The  Americans followed them to Queenston where they camped.  Here they could get supplies and reinforcements from Lewiston located just across the Niagara River on the American shore.  The Americans stayed in Queenston until July 24 at which time they left for Chippawa camping on the battleground.

General Riall ordered for the Americans to be followed once he learned of their departure from Queenston.  After receiving intelligence of their arrival at Chippawa, Riall sent the Glengarries, recently arrived from York, to the hill at Lundy's Lane.  They arrived at about 10 o'clock in the morning on July 25 and were joined by Captain William Merritt's Provincial Dragoons, some of the 1st and 2nd Lincoln Militia, and the 19th Light Dragoons.  Other units deployed to Lundy's Lane included a company of the 41st and the 8th, as well as some of the Royal Scots and Six Nations allies under John Norton.   Lieutenant Governor Gordon Drummond, who had arrived with the reinforcements from York that morning, ordered that cannons be placed near the church on the hill. 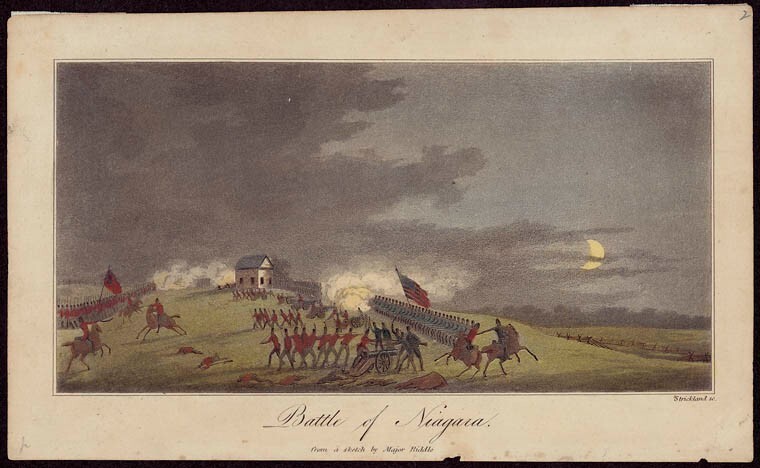 The British were closely watching the movements of the Americans.  When General Winfield Scott was seen advancing towards Lundy's Lane with a brigade of 1000 men in the late afternoon and initiating skirmishing, the British opened fire.   The ensuing conflict was largely hand-to-hand fighting that continued for several hours.  Scott's men were joined by General Ripley's and General Porter's brigades.  At one point the Americans succeeded in taking control of the British guns on the hill.   As the sun set and it grew dark, the fighting continued.

An account of the battle was written by Lieut. Charles Anderson of the Niagara Royal Provincial Artillery Drivers, who describes the scene as follows: "Both armies being on the top of the hill, and within four hundred yards of each other, a dreadful conflict of about three hours duration ensued; both sides fought with desperate valour, part of the time at the bayonet's point, and it was long doubtful which would give way.  There never was a piece of ground contended for in a more courageous manner than the top of the hill at Lundy's Lane, since the time of the Romans; Caesar and Pompey never fought in a more gallant manner.  The action lasted from 4 o'clock p.m. until 12 p.m., when the Moon got under a cloud, and it being very dark the firing ceased on both sides.  The Americans retired to their headquarters at Bridgewater; the British army remained on the ground at the top of the hill until about 10 o'clock, next day, when Gen. Drummond retired with his forces to Queenston for refreshment..." 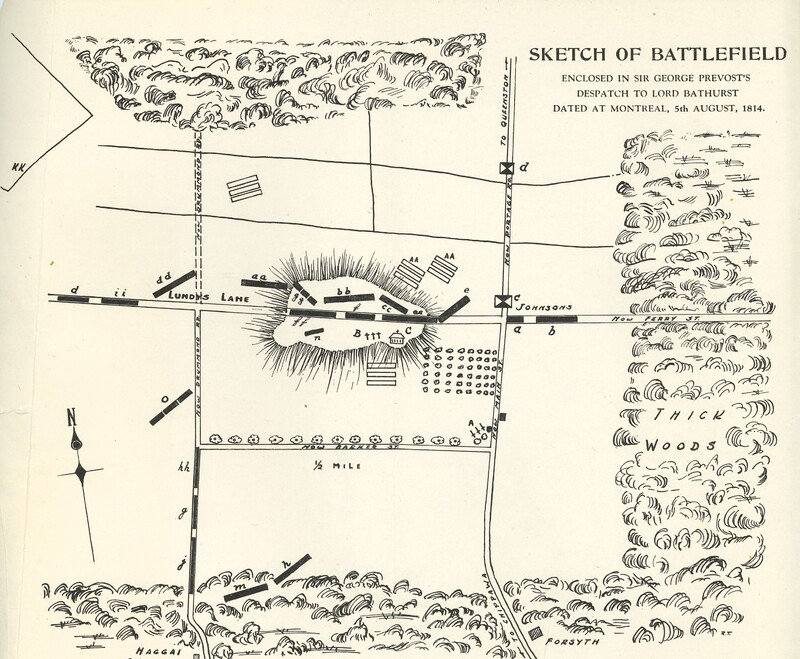 Around midnight, the Americans left, heading towards Chippawa exhausted and in need of ammunition.   They withdrew to Fort Erie with British General Drummond following and beginning a siege of the fort in August.   The loss of life during the battle was considerable.  There were more than 850 soldiers killed, wounded, or captured among both the American and British troops bringing the total number of fatalities, injuries, and prisoners to more than 1700.  During the battle, British General Phineas Riall was captured.   American Generals Brown and  Scott were severely wounded.   It has been described by many as the bloodiest battle ever fought on Canadian soil.  Both sides claimed victory.

A news clipping from the American newspaper the Independent Chronicle, declaring a victory for the Americans at the Battle of Lundy's Lane, August 4, 1814. 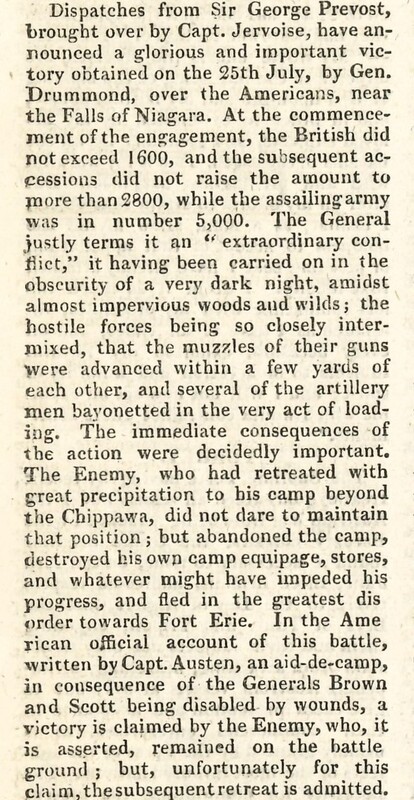 A news clipping from the Gentlemen's Magazine & Historical Chronicle (London, England), September 1814.  The article states that the British won the Battle of Lundy's Lane.  It is acknowledged that the Americans also claim victory but the point is made that the Americans admitted their retreat to Fort Erie. 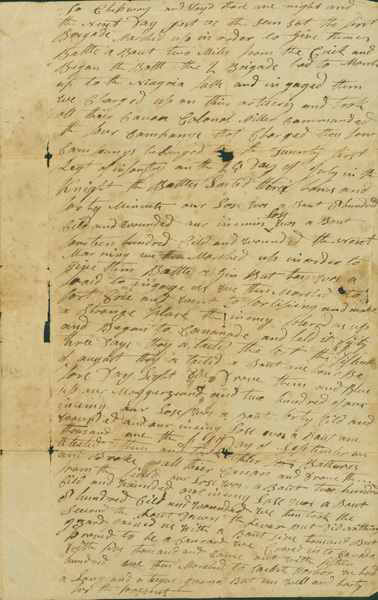 A letter written by Chase Clough, an American soldier, to his wife, December 9, 1814.  The letter contains an account of the Battle of Lundy's Lane.  According to Clough, about 800 American soldiers were killed or wounded compared to 1400 British fatalities and injuries.  He also alludes to an American victory, noting that in the morning they tried to engage the British but the British were afraid and declined, at which point the Americans marched to Fort Erie.