The Taming of Sleipnir by Holly Hiscock 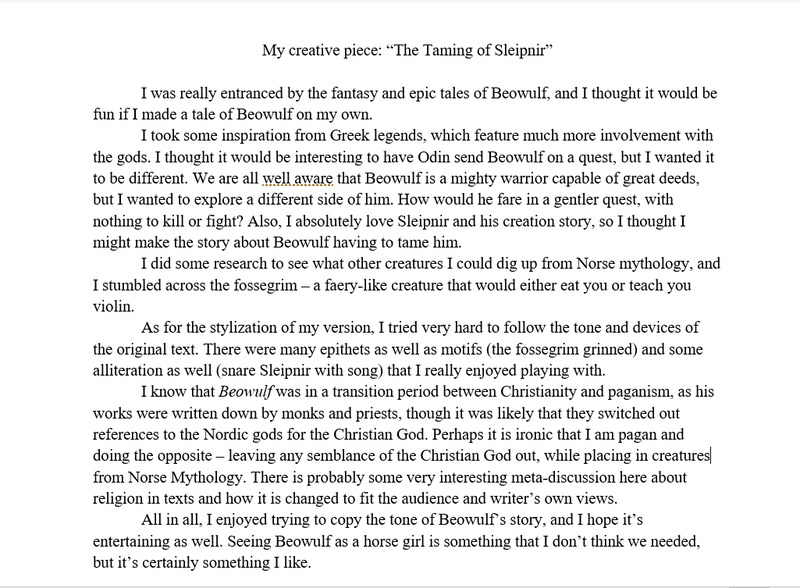 In the Writer's Own Words: Holly Hiscock

leaving any semblance of the Christian God out, while placing in creatures from Norse Mythology."

There was one night, when the great warrior, Beowulf –

known for his feats of bravery and strength –

had the most particular of dreams.

He stood in a hall,

A thousand times grander than he could ever imagine himself,

standing at the foot of a throne woven from golden vines and branches.

Upon the throne sat Odin Himself, adorned in glittering armor,

Spear in hand, Huginn and Muninn on His shoulders.

And so, Beowulf knelt before Him.

Odin spoke, His voice echoing in the hall,

“I have a task for you; a test of will, strength, and knowledge.”

“I am deeply honoured, o’ Odin,

“What is it that you should have me do?”

“My steed, Sleipnir, has escaped Asgard,”

“And he now roams Midgard, near your home.

You must capture him for Me

And once you have tamed him,

You must meet Me on the cliff overlooking the storm-dark sea.”

Before the warrior could answer,

He was thrust from his sleep,

Awakening in his bed to discover

Daylight creeping in through the window.

Beowulf rose from his bed with purpose

And set about gathering supplies for his quest.

He grabbed reins of woven leather,

Oats to entice the horse,

And a fine halter the same colour

As blood spilled on fresh snow.

Once he had gotten everything he needed,

The great Beowulf headed out to the fields beyond his village

Levelling the long grass with their never-ending hunger.

He had not gone too far before noticing a horse,

Taller than the others, with a coat the colour of rainclouds,

The horse had no halter, saddle, nor reins,

And he stood near other horses,

So Beowulf could not count his legs,

But the majesty of the beast was nonetheless unquestioned.

As gentle as he is strong,

Began to approach the great beast,

Oats in one hand, halter in the other.

The mortal horses took no notice of him,

Aside from the oats in his hands.

Until he was close enough to touch Sleipnir’s shoulder.

Before he bounded off,

disappearing into the nearby woods.

With a heavy sigh,

Beowulf followed after the great horse,

Following his tracks deep into the forest.

Some time later, he came upon the horse again,

Savouring the moss growing on the roots of an ancient tree.

So once again, Beowulf approached,

Hands low to his sides,

Other hand gripping the halter,

Reins draped around his neck so as not to catch

On stray roots and branches.

Once Beowulf was close enough to lay a hand

The horse bolted away, crashing through the underbrush,

For three days and three nights,

And for three days and three nights,

To lay a hand on him

But whenever Beowulf tried to touch him,

On the fourth day,

Sleipnir stopped to drink from a lake,

Before disappearing into the night.

Beowulf looked into the lake,

Surprised to see a man,

Naked as a newborn baby,

Sitting on a rock,

With flowing hair the colour

Of dying embers, his beard braided and beaded.

The music that sprang from his instrument

Not because it poorly played,

But rather because it was so well played

More akin to a babbling brook,

Entranced by the music,

Beowulf listened and let it wash over him,

Watched his fingers dance over the strings.

Once the man finished his song,

He looked across the lake at Beowulf

“That is no regular horse you are chasing,”

He called, his voice like wind through the trees,

“But then again, you are no normal man, Beowulf.”

Beowulf realized, “You are a fossegrim, aren’t you?”

The fossegrim grinned and pointed his

Bow at him, saying,

“Clever, but not so clever as to rein in Sleipnir.

I could help, but I will need something in return.”

“How can you help me rein in

Beowulf asked, for he was wary

As fossegrim were as likely to drown you

As teach you music.

“All great creatures can only be snared by music,”

“I see that it is your quest to rein in the great eight-legged Sleipnir,

So I shall let you do so on your own.

I may offer my services as a music teacher –

for the right price, of course.”

“And what is your price?”

Sacrificed on a Thursday, thrown head-first into a waterfall flowing northwards.

If I am satisfied, then I shall teach you music

Though it shall not be painless.”

Very well. I agree to your deal.

And there is a waterfall not far from here

Where I shall give you the goat.”

And said “I shall see you on the morrow”

Before drawing his bow

The music pushing Beowulf back home to search

For a suitable sacrifice.

Beowulf arrived at a waterfall deep in the woods,

A pure white he-goat in hands.

He spoke a prayer before killing the goat swiftly

And throwing it into the waterfall.

Beowulf only waited a moment

Before the fossegrim appeared from the waterfall,

Blood on his fingers and mouth,

His bow and fiddle clean.

The fossegrim grinned at Beowulf and said

“A splendid gift from a splendid warrior.

And now, I shall make you a splendid fiddler.

And Beowulf put his hand in the fossegrim’s.

The creature smiled and kissed it sweetly

Before drawing his fingers back and forth

Ugly sounds erupting around them

Until Beowulf’s blood slicked the strings.

The fossegrim released his hand with a grin

“Now you can snare Sleipnir with your song.”

And now his violin

And headed out to find the eight-legged Sleipnir.

He tracked the magnificent horse down to the meadow

Where he had first seen him.

Instead of approaching Sleipnir,

Beowulf held his violin aloft and drew his bow across the strings.

The notes danced on the wind,

And Sleipnir pricked his ears.

His head picked up, turning to look at Beowulf.

Beowulf smiled and began to play.

The goat seemed to satisfy the fossegrim indeed,

Because the music that streamed from Beowulf’s instrument

In that it flowed like a river from him -

In that it was purely ethereal in tune.

His steps tentative and graceful

As he was drawn in by the music.

When he was close enough that his breath

He switched his bow to his other hand

And gently lifted it to Sleipnir’s nose,

When Sleipnir did not spook, Beowulf smiled and set down his instrument.

He carefully placed the halter on Sleipnir’s wide

Fed him the oats,

And tied the reins.

But held back, as this was not his steed;

It was not a wild beast he had tamed on his own,

But wise Odin’s very own steed that He rode into battle.

So Beowulf gathered his violin before taking the reins in hand.

He led Sleipnir back to his village,

To a cliff by the sea,

Churning far down below,

Mimicking the movement of the clouds above.

Odin was waiting for them,

Spear in hand, a grin on His face.

Beowulf bowed before handing Him the reins.

“You have done well, mighty Beowulf,”

Odin told him, “And you have my thanks.”

Beowulf knelt before the king of the gods,

Suddenly hit with a strong wind.

When he looked up,

Both king and steed were gone.

The quest had been tiresome, and different from what he was used to.

However, Odin’s blessing was always a splendid thing,

As well as knowledge of music.

But a third gift was waiting on his bed;

A new set of armor,