The Tale of how Wisdom conquers Pride by Lex Fournier

Valiant earl Okeim gave the order for a small group of warriors to sneak up behind the wicked sea-men and strike the foul enemy from behind, causing a distraction that would ensure their victory over the creatures from the sea. There was no warrior who would reject the orders of one as strong and honourable as the earl, he would fight alongside his warriors and lead them to success in battle just as he had many times before. The men of  the waves were of no match to one such as the stoic and heroic earl Okeim and the warriors he led.

The proud warrior Ealsgar led the squadron on its way to strike a crucial blow on the vile heathens of the seabeds. He would show his fearlessness and merit and gain glory befitting a warrior, the spear in his hand was held firm, no man who comes from the seas would be able to defeat him. Wise Ælhim halted his progress and brought his shield up to stop a fatal blow from cutting through Ealsgar, the unexpected strike they had planned turned into an ambush against them. The seafarers were warriors the same as them, Eavnir was slain before his shield reached up, the serpent of the sea had noticed their approach and now these brave warriors were met with force. Galin’s brave spear pierced through the neck of the seafarer who had slain Eavnir, he had been avenged. Ælhim called for these valiant warriors to push back the vile vikings as Halvar’s spear was broken by the sword of a viking and his body was pierced through. The clashing of metal on metal, blade on solid shield and the piercing of flesh and bone echoed loudly across this battlefield, no other noises but the sounds of combat rang in these courageous warriors' ears. Ælhim’s fierce blade shattered the sword of an oncoming warrior and his blade cut through his body, removing him from the world, Svalgar and Alfgar had nursed injuries and were being protected by the shield of fearless Helnoth, while Ealsgar parried through the enemy line. Ealsgar proudly slashed his once shiny blade now coated red through all those who met his blade, and his shield lay cast aside to the bloodied ground of the battlefield. Ælhim fought alongside Galin, with each slash of his blade being followed by the piercing of the courageous Galin’s spear, and with each enemy attack met by Ælhim’s shield. For the powerful Ælhim, who had fought on many battlefields possessed wisdom that followed him, he decided on this formation to support Galin who’s leg had been wounded, as to protect him while pressuring the wicked sea dwellers.

With this they pushed the vikings back, and began pushing back to recover and to make plans for their next actions. The proud warrior Ealsgar would not relent on his desire to continue pursuing their goal of attacking the sea serpents from behind even if it meant leaving behind the injured warriors of Svalgar and Alfgar. Galin voiced his desire to return to Okeim and the main force of warriors, as well as voicing his displeasure at Ealsgar’s for fighting without care for his brethren. All the while Helnoth sat silent on the issue at hand, with this Ælhim stepped up to voice his opinion. Wise Ælhim approached Ealsgar and spoke with eyes locked on him, “O proud Ealsgar, allow me to tell you a story of a warrior who experienced a great tragedy as he left his brethren warriors behind for glory and let his pride rule his decision making.”

‘In the distant past there was a warrior who was tasked alongside his brother Hrothbeg and a group of warriors with hunting down the fleeing seafarers of the nearly defeated enemy. The group had slowly been gaining ground on the injured and fleeing warriors even despite their large group. Though the warrior was strong, he was also too proud to keep the slow pace that the group had set, and believed that these injured men of the sea were no match for him, that he would catch up to them, slay the fearful serpents and gain glory for his actions. As such he left his shield and charged ahead, his experienced brother followed after him crying out like a warrior on a battlefield, asking for him to return to the group, but his pride was too great to listen. As he arrived at the edge of a forest he paused for a brief moment, the arrow that would have struck his vulnerable body was stopped by the shieldless body of Hrothbeg. His actions cost the death of his brother and on that day a cloud had cleared from the warriors mind, and the rain that fell taught him a grave lesson. The warrior realized that if someone had not been there to save him, he would have died and if he had listened to Hrothbeg and stayed the course they were on his wise and strong brother would not have died a meaningless death.’

“Take it from one who lost a brother to gain the wisdom of clarity, you do not have to lose something to gain wisdom like I have, heed my words and do not let them slip from your mind. Be wise in your actions and you will find glory in due time, for those who allow their pride to rush them to seek glory are the warriors who lose something important to learn, or die young, having gained nothing. Meanwhile, those who die old are those whose time has passed and strength of youth has vanished from their bodies. One must first live before one can gain what they seek, your brethren warriors will fight by your side, with them you will teach and you will learn and you will achieve glory. There is only so much strength one man has, and if you are too prideful to realize this, one day you will suffer the consequences.” Ealsgar looked over the warriors surrounding him, those uninjured and those who were, all of them were his brethren warriors who were willing to fight alongside him. With this Ealsgar’s mind was decided, he would push no further, they would return to Okeim and announce their failure.

Their declaration of failure was met with a look of dismay, the earl however declared how if they had all perished it would have been by just as much his hands as those of the vile serpent seafarers. The warriors faced no torment for their failed return, for they had lived to fight once more on the battlefields alongside their brethren warriors and did not attempt to achieve an unachievable mission. Earl Okeim honourably stood at the head of all the warriors and announced his desire for the warriors to fight bravely and for their brethren, for success would be achieved by not one man, but by all the warriors present, showing that he was their leader. 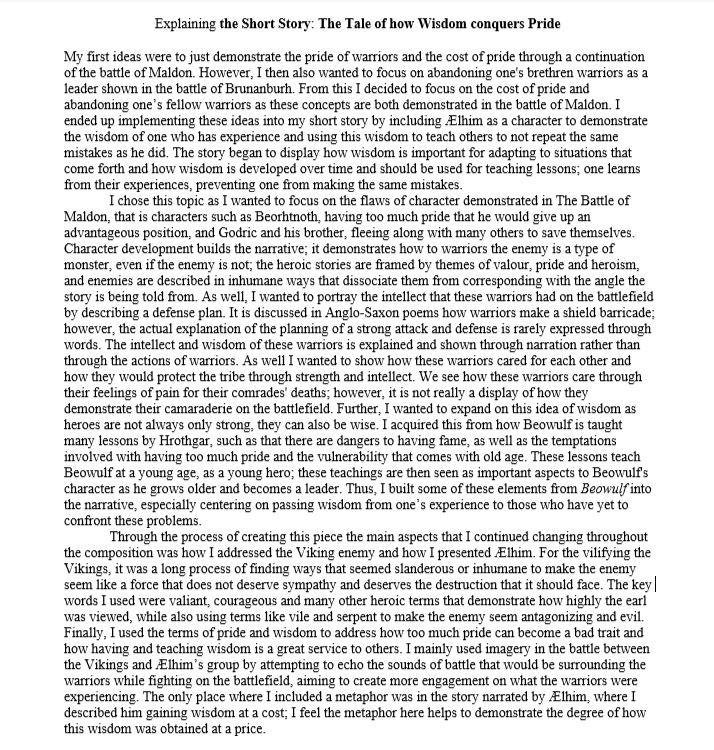 In the Writer's Own Words: Lex Fournier