The Separation from the Divine Canon by Julia Schultz 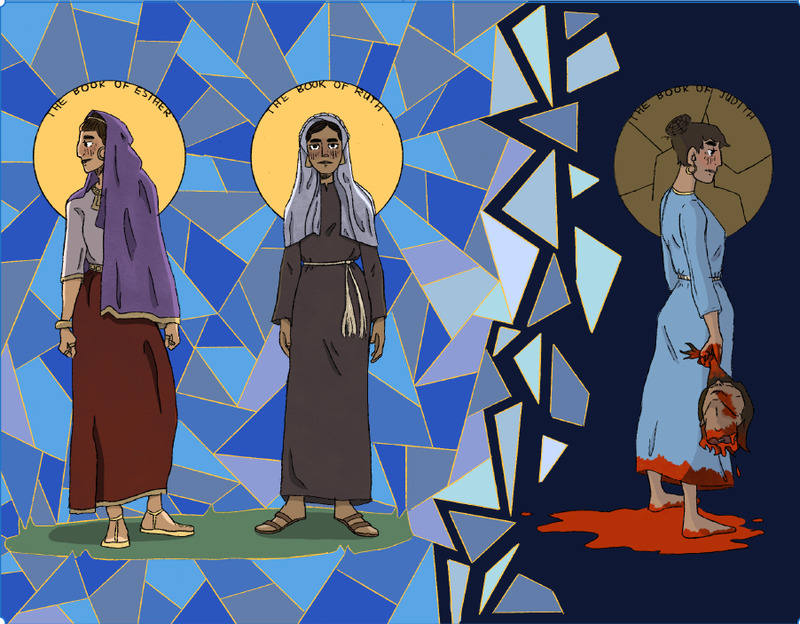 I chose to create an art piece centered around Judith. As someone who grew up in a modern Christian household, the Biblical Canon is something that I have always been quite familiar with. I learned all the stories, went to Bible class and Sunday school, and reflected on the meanings of the Biblical text. However, being Christian rather than Catholic, I never learned about the Apocrypha or the Vulgate Bible, so the story of Judith was unknown to me (until I read it in class this term), which may be the reason why this Old English poem (from the Cotton Vitellius A.xv manuscript) spoke to me so much.

In my piece, I wanted to showcase the separation of Judith from the other women who are titular characters in their Biblical books. While Ruth and Esther got to keep their canonical status and remain in the King James Version of the Christian Bible, Judith was denied that right. Her story recounted in the Old English poem, located in the same manuscript with the Beowulf poem is a “Heroic ode [that] focuses on the crucial part of Judith’s story, the beheading of the Assyrian leader and defeat of his army” (Russo); I like to imagine that the violent nature of her heroic tale alienated her from the heroism of Esther and Ruth, who were brave in their own right but behaved more within the traditional feminine roles they are ascribed, keeping peaceful and acting with love (King James Bible, Ruth 1.16-18) and quiet strength (Esther 7.3-4).

As so many artists have done before, I wanted to portray the strength that Judith displayed in her beheading of Holofernes, so I made sure to include the head of her would-be attacker in her isolated portrait (Judith, 113.105-111). I separated her from Ruth and Esther physically and by not including her in the stained-glass portrait. Through this exploration of Judith and her expulsion from the Biblical Canon, I was able to think about the meaning of the text beyond the story itself and think closely into the heroism that Judith portrayed in her story. She got bloody, she was a widow, she became a hero (Judith, 118.334-341). She portrayed a strength equal to warriors in Beowulf and the knights of a Chivalric story, and I believe that in the eyes of history and translation, through the will of time, this was too great to be contained within the Christian Bible’s pages.

My process was fairly straightforward once I had decided that I wanted to focus on Judith’s removal from the modern Biblical Canon. I started with the placement of the three women on my canvas, making sure to separate Judith from Esther and Ruth. I then investigated the kinds of clothes that women would have worn in Biblical times, both commoners and royalty, as Esther was a queen (Esther 2.17). Once I had finished designing the women themselves, I decided that I wanted to include religious imagery in the halos. I made the decision to make Judith’s dull and broken as she would not be remembered in the same way as the other two women, and thus she doesn’t have a light of her own but is only touched by theirs. I finally decided on the stained-glass motif, having it crack away as it reached Judith, once again separating her.

This work and the process that I used to create it demonstrated to me the sparsity of heroic women within the modern Biblical translation. Heroism is something that is important, in my opinion, to display to girls, especially those in potentially oppressive conditions such as ultra-religious households. There are only 93 women in the Bible in total, and they only speak for 1.1% of the time. Out of the 66 books, there are only 2 named for women (Laurie). Would it have really changed the message of the Bible significantly enough that it was really and truly necessary to remove the story of Judith from the modern interpretation of some of the Bibles in the Early Modern period?

Hanna, Laurie. “Study finds there are 93 women in the Bible - but they speak just 1.1 per cent of

Schultz, Julia. "A Discussion of the Design and Theory of 'The Seperation from the Divine Canon'." In Reading the Middle Ages, supvr. and ed. Teresa Russo, Centre for Medieval and Renaissance Studies (MARS), Brock University, March 2021, Niagara (The Separation from the Divine Canon by Julia Schultz · Reading the Middle Ages: Oral and Literate Cultures · Brock University Library). Digital Scholarship Lab (DSL), Tim Ribaric and Daniel Brett.