Dystopia in “The Ruin” by Meegan Rozon 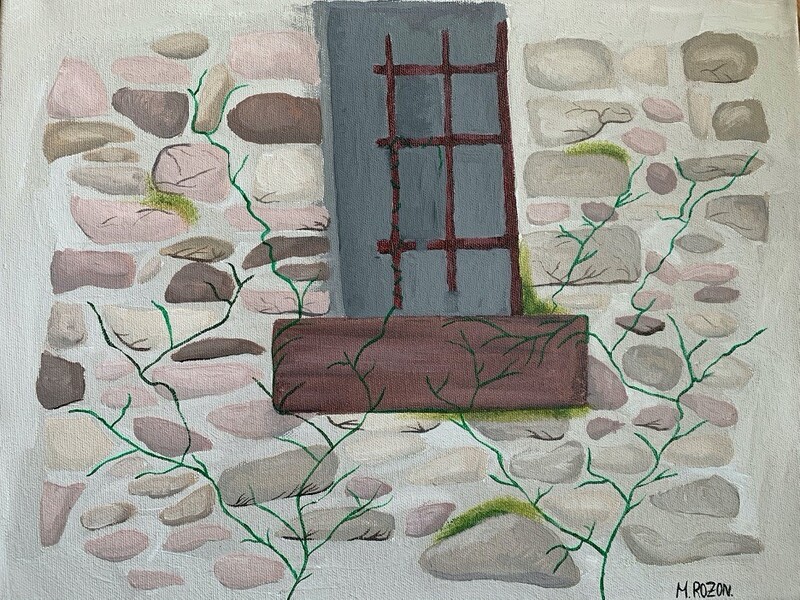 Dystopia Seen in “The Ruin”

This piece was created in an effort to portray the poem “The Ruin” by its descriptive portrayal of the environment around the narrator. For this piece, I have used acrylic paint to create a realistic view of the houses the narrator is describing. To align my painting with the poem, I based it on the quote “A hundred generations, have passed away since then. This wall, grey with lichen and red of hue, outlives kingdom after kingdom.” (59). I painted the side of a house that would be seen as houses that had the most chance of less destruction compared to houses made of sticks and straws made for the less wealthy. Wooden houses which are more likely to rot because of the unlikely chances of these more durable houses have the same terrible fate as those who were constructed poorly. Houses made of stone were majority made for those who were rich and were capable of affording these well-structured homes so they would not deteriorate over time and with the weather. The reasoning for picking this well-made house was in an effort to portray how terribly the community fell apart over time.

I painted the house in monotone colours of brown, beige, and mostly red of which were the normal stone colours being used within this time period but had also chosen to keep them this colour instead of changing it to help portray the lifeless look of the town once it has been abandoned and betrayed by their people. I decided to paint the majority of the stones red by the description that is given about the houses he passes by. I decided to add healthy green vines to show how the house has aged and been unattained over time. The vines have been nourished through the soil being rich from other houses made of straw and wood deteriorating into the earth. I also added cracks into the stone to show the house beginning to fall apart and becoming unstable, although this house should be “wrecked by fate; the city-buildings crumble” (59) the most. The cracks display the related quote of “Great the martial clamor,” (60). The structure is seen as sturdy but with visible cracks along with the stones of the wall. The weapons used during wars within the town, show that the cracks in the building have been caused out of force and aggression. This is why I had decided to use a red frame for the windows to portray the bloodshed that occurred during these battles.

At the end of the poem, it is described how “They allowed scalding water to pour, over the grey stone” (60) this is shown through the moss that has started to cover the house. Originally, I had not planned to put any moss on the house and had planned to create more cracks within the stones. After going over this poem a few times, I kept getting stuck at this phrase at the end, wondering how I could represent this accurately without having to start from scratch. I thought about the possibility of incorporating water into the picture, but I did not want it to take away from the house. I eventually landed on how moss often begins to grow in hot wet places. I thought that I could incorporate this as well as the vines to demonstrate the age and the style of the unmaintained house. Although this quote does not just represent water and the aging of the house to me, it as well represents the sorrow that the town is now feeling once it has been destroyed, abandoned, and forgotten. The water as I was reading it, was a symbol of the emotion that was felt. In the medieval stories, we read there are always heroic individuals (Beowulf, Judith) that save the day. Although in this poem, I was not capable of envisioning it.

The houses are destroyed and the land ruined, so it seemed like no one was there to save it. Therefore, I could not find a meaningful way to show the symbolism of heroism when I did not find a useful example within the poem. So instead, I went against heroism. I showed through my painting that heroes will not always be there in a time of need, and things may fall apart without them. I created a house that looked unpleasant to the eye by the cracked stones, the broken windows as well as the moss and vines. But this house is not broken, it is not unlivable, and it is indeed fixable. Leaving this up to interpretation that there may be a potential hero in the future who is indeed capable of saving their town. Instead of with swords and arrows, he or she can save it with their hands, cleaning through the piles of what used to be their town.