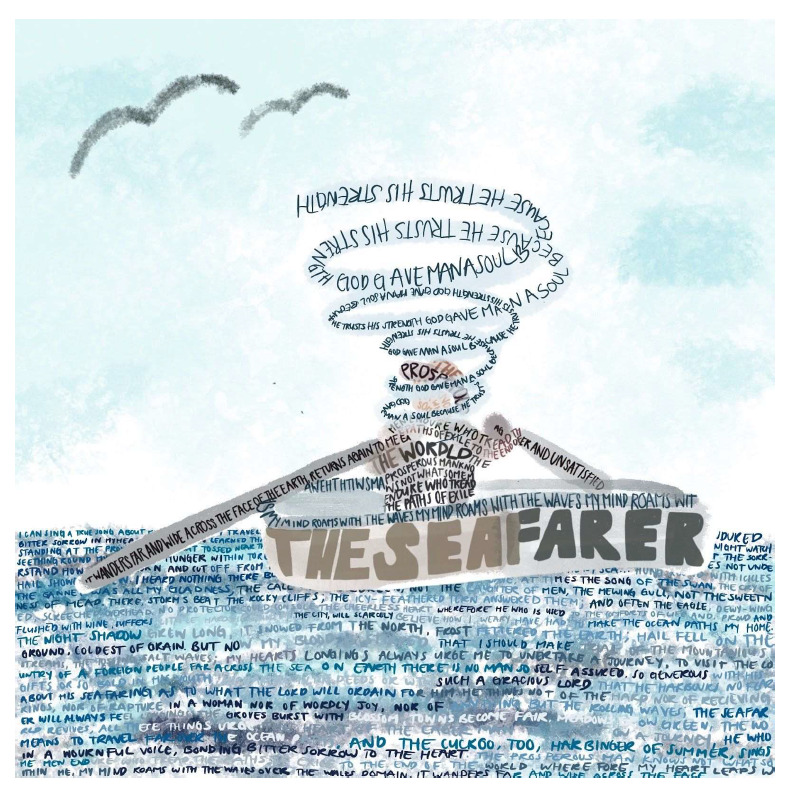 Barely Afloat: A Creative Response to The Seafarer

Barely Afloat: A Creative Response to The Seafarer

I believe that words have the power that actions and emotions can sometimes not express. As an English major and an avid journaler, I find strength and power in words and writing. I decided to examine and reflect on The Seafarer, an Old English poem that recounts the life and thoughts of a man at sea by himself. I am not the greatest artist, but I rarely have the chance to be creative in a university setting and thought I’d try my best to recreate the poem in a visual art form. The poem demonstrates fundamental Anglo-Saxon beliefs and notions that life is shaped by fate. There are themes of fatalism, religion, wisdom, exile, sorrow, and grief, all common characteristics of Anglo-Saxon elegies. After reading the poem time after time, one of the main things I continued to notice was that the boat kept the man physically afloat but that it was of no use because of the thoughts and sorrows he was drowning in.

The seawater in the image I created is composed of different shades of blue to represent the ocean described by the poet (which is also the poem itself). I wanted to have the entire poem within the water because I believe that nature harvests emotions and that his emotions have been poured into the sea that he sails on. This also includes the notion that our sailor is drowning in his thoughts. At first, I wanted to put him upside down to have him literally drowning in his thoughts, but then I thought that it looked more pleasing to the eye if he was upright and filled with words. The rim of the boat and the ores that he is using are filled with quotes that demonstrate the writer’s dissatisfaction with life. On the rim of the boat, it states, “my mind roams with the waves" (v. 60; Crossley-Holland 54), and on the oars it is written: “it wanders far and wide across the face of the earth, returns again to me eager and unsatisfied” (vv. 61-63; Crossley-Holland 54). I wanted to draw attention to the frustration that seizes the protagonist and the lines that prove he is not satisfied with the waste of a life he is living. His heart and soul seem to leap out of his body and soar all over the world, and yet, although he is sailing on an ocean full of possibility and direction, he remains stuck in his own sorrows and despair. The ores and the boat were purposefully filled with those quotes because although his boat can take him physically anywhere, he remains at sea and refuses to return to land. The man’s body is filled with the quote, “The prosperous man knows not what some men endure who tread the paths of exile to the end of the world” (vv. 56-58; Crossley-Holland 54). Figuring out which quote to put here was the hardest because I had to find one or two lines that encapsulated everything he was filled with. I decided on this quote because it demonstrates the sorrow and self-pity he feels for himself and the deep-rooted envy he feels for those with a more prosperous happy life and who do not have to drown in their thoughts as he does. He is consumed by this idea that nothing but God will make his life meaningful and refuses to take pleasure in anything materialistic like the people that live on land.

Finally, I wanted to depict how consumed he is with his thoughts because after all, that is all he has with him at sea. The quote the seafarer is disoriented by is, “God gave man a soul because he trusts His strength” (v. 112; Crossley-Holland 56). The seafarer is trapped in this psychological and physical path of exile and is overwhelmed with emotions of loneliness, dissatisfaction, and sorrow. The only escape he has is a spiritual one knowing that as long as he satisfies the Lord, his life will be worth living. I hope you enjoyed this piece and can see how my choices and decisions represent the verses.  I truly believe words have so much power in them and thought to combine them with another very powerful form of expression: art.