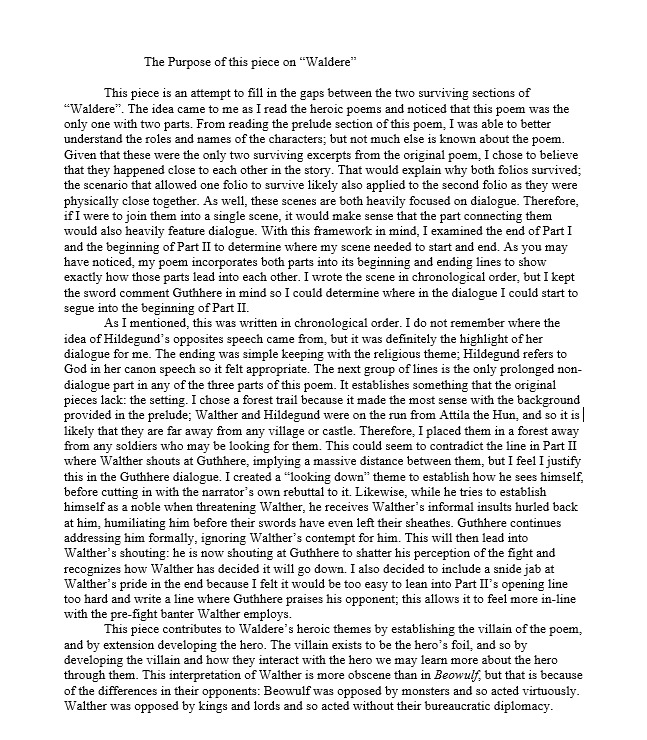 In the Writer's Own Words: Austin Evans

… He spurned both treasure and precious vessels,

many treasures; now that the lord must leave

this fight without either, he must return

to his own fair country, or else sleep here,

if he then chooses to face you. Brave Walther,

you are so opposed to that brutish man I cannot

help but feel he exists solely to degrade you.

Your highs are his lows, your courage his cowardice,

your charm his repulsion. Indeed, the only field

in which you two are well-met is on the battlefield,

but I do not think for a second that you shall

fall to him there. I have faith that you will meet

him there and leave the victor, for with God

by your side you cannot possibly fail!’

Her speech ended abruptly as the sound of

they had been standing on. Walther pulled himself

in front of Hildegund, his broad frame shielding

her from the dust kicked up by the dark steed

before them. Atop it sat the dark lord Guthhere,

staring down at them like a hawk peering into

a field mouse’s den. But he found no mice

looking back at him; indeed if there were any

vermin at that scene, it would be he who

sat atop that horse. He glared down at them,

daring Walther to look away and break his resolve.

Walther, the brave hero that he was, refused.

Nevertheless Guthhere carried on, talking down

to his adversary as though he were staring down

an invader storming his castle gates:

I am surprised to see you both out so far

away from your graves! The rumours, oh how

quickly they spread, tales of how the treacherous

maiden and her rough-headed lover

were cut down by assassins. But what a relief,

I must say, to see you two here. Let it be known

that I am a champion of truth, and despise seeing

through a kindling. Now that I have you two here

before me, I will be able to tell the people

the truth about your untimely demise.’

Walther’s rage flared up at the mention of

He stared his foe dead in the eye and addressed him

with all the respect the king deserved:

Your words speak quite highly yet cannot

expecting to find me wounded from my encounter

with the assassins, but as you can see I am

no more injured than the day I was born.’

The king scowled at him, showing his

irritation with the young lord’s brashness.

‘I expect no such weakness from you,

my dear Walther. I have heard legends of

and wielding the sword known as Mimming.

One could say the weapon may exceed the man,

for tales of the mighty Mimming are more prevalent

then those of the man who wields it. It is

than all but one which, however, I have here

in its jewelled sheath, sleeping quietly…’