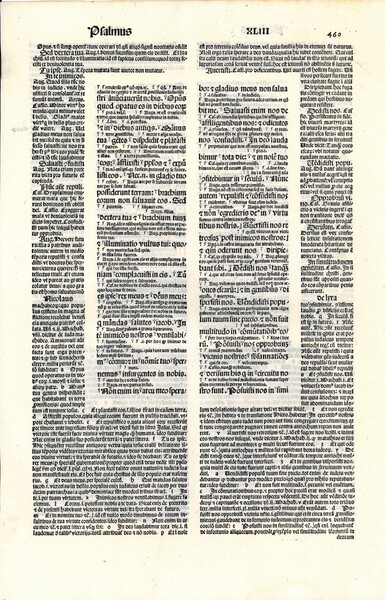 Printed Bible (Psalm XLIII/460) with the commentary by Niccolò da Lira framing the text, 1495 by Paganino Paganini Press in Venice, Italy; located at The Archives and Special Collections of Brock University.

Since the invention of the printing press in 1440, the world of reading and writing during the Renaissance dramatically shifted. As books became more readily available, society began to open up to the allocation of knowledge from authors and publishers other than the Catholic Church. Reading and writing were no longer an elegance only shared amongst the upper-class but accessible to all levels of society. Paganino Paganini, an Italian-born printer and publisher, partook in the production of such societal shifts. Over sixty editions of novels and religious texts can be traced back to his name (Nuovo).  The publication of religious books and philosophical texts through his print is a significant factor in the distribution of suppressed Western knowledge during the Renaissance.

Paganino Paganini was born in Brescia, a city in the Northern Italian region of Lombardy. It is estimated that he was born sometime during the 15th century, however, a definite date of birth is unknown. At a young age Paganini moved to Venice where he married Cristina, the daughter of German printer Francesco Dalla Fontana. The marriage was preceded by the onset of Pagainini’s career as a printer and publisher, as Angela Nuovo explains, “Inizio la sua attivita a Venezia nell’inverno 1483-84, in societa con il mantovano Giorgio Arrivabene, a sua volta fondatore di un’importante dinastia di editori attivi a Venezia e a Mantova” (Dizionario Biografico; “He became active in the winter of 1483-84 in Venice, in association with Mantuan Giorgio Arrivabene, the founder of an important dynasty of active publishers in Venice and Mantua.”). As it is stated by Nuovo, Paganini began his publishing work in partnership with Mantuan printer Giorgio Arrviabene during the winters of 1483-84. Moreover, as Paganini’s publishing career began to rise, he then partnered with his son Alessandro Paganini in his most notable works.

Paganino Paganini's most celebrated publishing works are those of liturgical religious purposes and medical-philosophy books for Universities. Paganini's publications include Diurni, Missals, The Quran, and a four-volume Bible. Paganino and his son Alessandro are accredited with publishing the first Arabic printed version of the Qur’an between August 9th, 1537-1538, and the book was contracted to be exported to the Ottoman Empire (Norman). This publication proved to be controversial for Paganini as Islam was not widely accepted in Italy at the time and was highly scrutinized. As Jeremy Norman explains, “Possibly the most daring and pioneering enterprise in sixteenth-century Venetian printing, this edition was mentioned by a handful of contemporary witnesses, and was reported as wholly destroyed as early as 1620. The reasons suggested for its destruction ranged from its suppression by the Pope…to the ridiculous (divine intervention would prevent its printing)…” (HistoryofInformation.com). The suppression of Paganini's publication of the Qur’an by the Pope and other Italian printers led to the destruction of all the copies made. However, Angela Nuovo discovered the only single surviving copy of it in 1987 in the library of Franciscan Friars of Isola di San Michele, inspiring one of the first biographies to ever be written about Paganini.

Paganini's publication of the Bible located in the Brock University Library, provides an understanding of how the work was printed and published to the Italian public. The Latin biblical text is centered in the middle of the page, and the commentary of Niccolò da Lira surrounds it, taking up the majority of the rest of the page. The reasons for Paganini’s Bible being so widely celebrated is explained by the Dizionario Biografico degli Italiani, as it states, “Era la prima volta che si pubblicava la Bibbia con il commento impaginato intorno al testo e l’esposizione di Niccolò da Lira. Nella richiesta del privilegio, Paganini si impegnava a mettere in vendita l’opera per 6 ducati (rispetto ai 12 della Bibbia con il commento ordinario piu i 5 dell’esposizione di Niccolò da Lira). Il prezzo sarebbe dunque stato un terzo di quanto precedentemente necessario per un’opera del genere…” (Nuovo; “It was the first time the Bible was published with paginated commentary located around the text and with the exposition of Niccolò da Lira. In the request for privilege, Paganini undertook to sell the volume for 6 ducats (in comparison to 12 ducats for a Bible with ordinary commentary plus 5 ducats for the exposition of Niccolò da Lira). The price [that he sold this Bible], therefore, would have been a third of what was previously recommended for a work of this kind...”). As the article explains, not only was Paganini's publication the first of its kind to include the commentary of Niccolò da Lira, but it was also priced at one-third of what a Bible with standard commentary would have cost at that time in the Middle Ages. His cost, therefore, made the Bible more accessible for the public.

Paganino Paganini died in Venice between June 27th and August 11th, 1538 (Nuovo). However, his publications and print allowed for the Western world to have insight into ways of life that differed from the norms of their society. Not only was he a superb and innovative printer, but his allowance for the publication of cultures, lifestyles, and religions outside of the Catholic-Italian culture of the Renaissance brought new light relating to the acceptance of other Abrahamic religions. Paganini's publications were instrumental in the cultural status of Renaissance Europe when it came to religious and educational works. His commitment to the expansion of knowledge in Italy changed the way that the printing industry was managed. Paganino's legacy was passed unto his son Alessandro who during the 16th century produced hundreds of titles in honour of his father.

Norman, Jeremy. “Paganino & Alessandro Paganini Issue of the First Printed Edition of the Qur’an in Arabic, of Which One Copy Survived” In HistoryofInformation.com: Exploring the History of Information and Media through Timelines, September 25. 2015. www.historyofinformation.com/detail.php?entryid=405 Web.