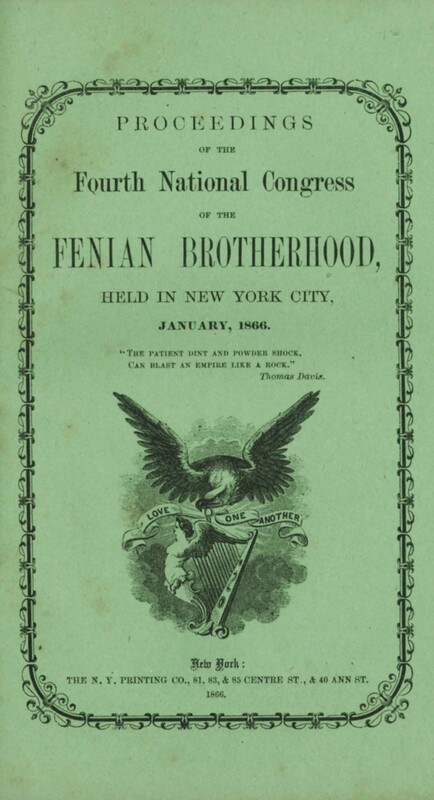 Fenian Brotherhood Congress Proceedings, New York,  1866.  The document begins "We, the Fenians of America, in order to form a more perfect union, establish justice, insure domestic tranquility, and secure the blessings of liberty for the Irish race in Ireland, do ordain and establish this Constitution for the F.B. of America".

In 1858, a secret society of insurgents was founded by James Stephens in Dublin.  Their goal was to overthrow British rule in Ireland and establish an independent republic.  The group had an American branch led by John O'Mahony that operated publicly.  He named the society the Fenian Brotherhood.  The name was derived from the Irish Gaelic term "Fianna Eirenn", a band of mythological soldiers who O'Mahony believed defended ancient Ireland from foreign invaders.

The movement was popular with Irish American soldiers who fought in the American Civil War (1861-1865).  After the war ended, the group was divided on how to achieve Irish independence.  One faction, led by John O'Mahony, believed that they should send men and money overseas to support a revolution in Ireland.  Another group, led by William Randall Roberts, felt that the best strategy was to invade the British colony of Canada.  They argued that it would be much easier logistically to invade Canada than to send thousands of Irish American Civil war veterans across the Atlantic.

Once they had overtaken Canada, they could disrupt British transatlantic commerce or negotiate Irish independence in exchange for giving up their control in Canada.   Another possible outcome of an invasion would be war between Great Britain and America.  The relationship between the two countries was strained following the Civil War and the Fenians felt that war might bolster their cause.  Fenian victories in North America would encourage those in Ireland to rebel, while British troops would be pulled across the Atlantic to British North America to defend the colony.