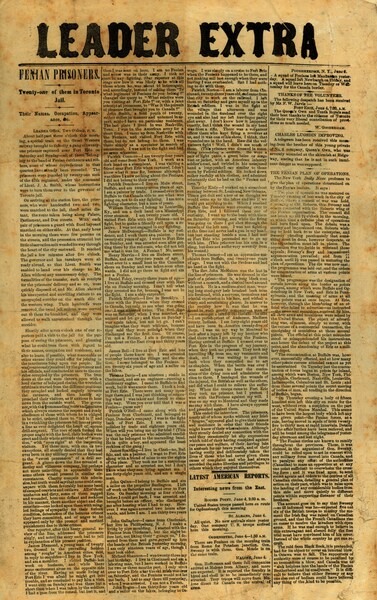 Newspaper reporting on Fenian prisoners taken to the Toronto jail, and the latest American reports from the East, June 4, 1866.

The attack on Ridgeway was followed by a Fenian attack several days later at Pigeon Hill in Missisquoi County, Canada East (Quebec).  The Fenians occupied Pigeon Hill for 48 hours before withdrawing.  They retreated to the United States where they spent the next several years regrouping.  On May 25, 1870, the Fenians attacked Eccles Hill near Frelighsburg, Quebec.  The attack was quickly subdued by Canadian forces.   The Fenians had failed to gain enough support for their cause and many were arrested by American authorities for violating the neutrality proclamation of President Ulysses S. Grant.   Another raid was attempted from New York the following day but it also failed.

Although the Fenian invasions were unsuccessful they had some significant impacts in Canada.   The Fenian threat provided an incentive for Confederation, bolstered security agencies in Canada, and brought about a movement to remember and honour Canadian veterans.

The Fenian threat also brought about a resurgence of the Canadian secret police force.  This force had been founded during the American Civil War and was intended to prevent Southern confederates from using Canada as a base to attack the North.    Once the Civil War ended in 1865 the force was gradually disbanded.  The Fenian threat brought renewed purpose to the secret police and resulted in their expansion.

A strong supporter of the secret police was Thomas D'Arcy McGee, a former Irish rebel who became a Liberal conservative MP.  McGee openly denounced Fenianism and many accused him of being a traitor to Ireland.   He was assassinated in Ottawa on April 7, 1868.  Patrick Whelan, an Irish tailor suspected of being a Fenian,  was arrested for the crime.    The Dominion Police Force was created shortly after McGee's assassination.  Its purpose was to protect government officials, guard the Parliament buildings, and act as an intelligence agency.    The force remained active until 1920 when it was integrated with the Royal Canadian Mounted Police. 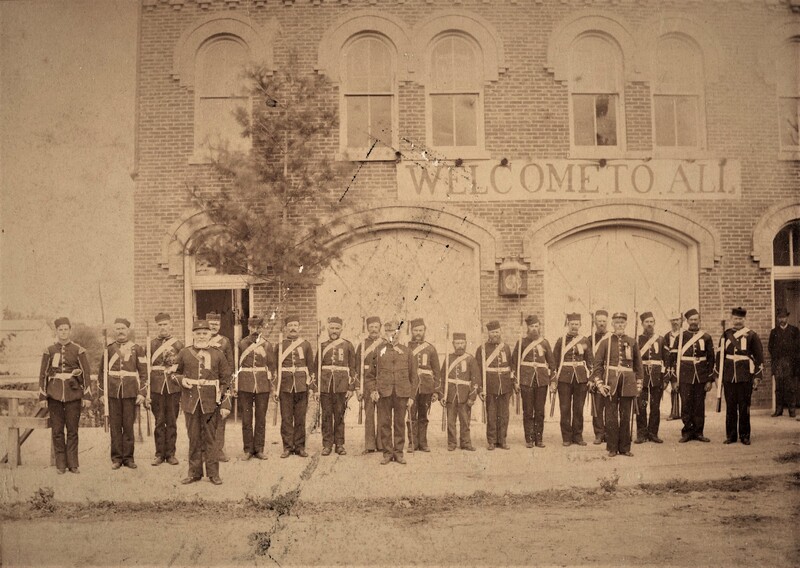 Camp Thorold No. 2 Company Veterans, 1893.  The No. 2 Company was called into service during the Fenians Raids in Niagara in 1866.

Decoration Day began as a way to honour and remember the Canadian militia members who fought in the Battle of Ridgeway.   It was also a form of protest by the veterans of the Battle of Ridgeway who felt that their contributions to Canada's security during the Fenian attack were being overlooked by the government.  The first Decoration Day was on June 2, 1890, the anniversary of the battle.  Veterans gathered at the Canadian Volunteers Monument near Queen's Park.

It quickly became a popular annual event and grew to include veterans of other conflicts including the North-West Rebellion, the Second Boer War, and the First World War.   The Fenian veterans efforts resulted in the creation of British service medals recognizing the participation of Canadian militia in conflicts prior to the First World War.  Decoration Day was eventually eclipsed by Remembrance Day on November 11, although some continue to recognize and observe the occasion. 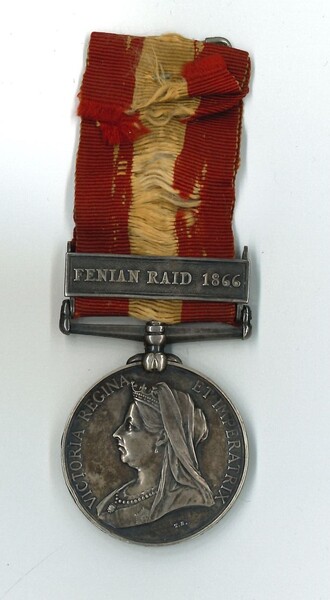 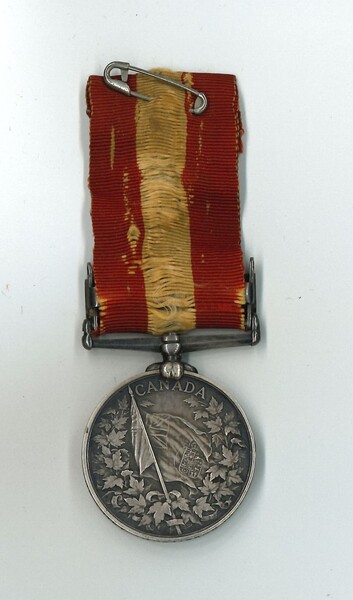 This medal was awarded to Corporal James Robertson in 1899.  Roberston was a volunteer with the 19th Battalion during the Fenian raids.  The 19th Battalion later became the Lincoln and Welland Regiment.