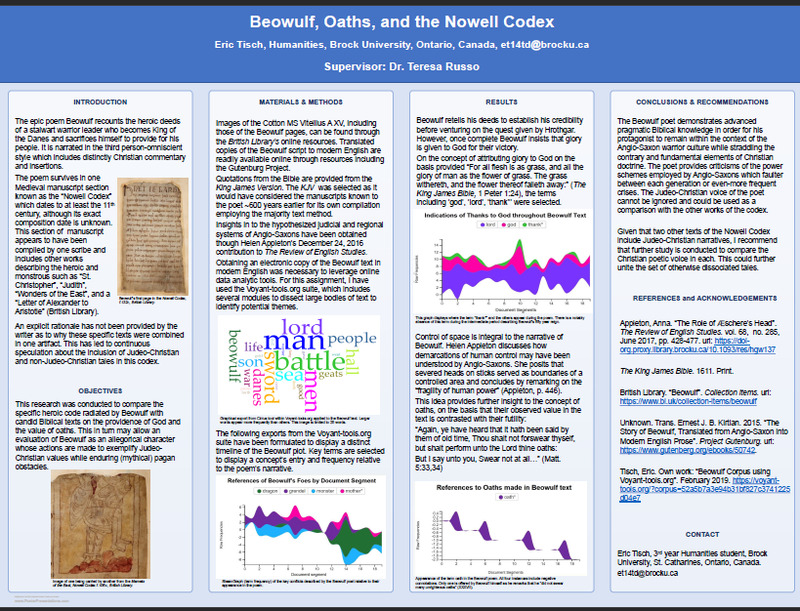 "BEOWULF, OATHS, AND THE NOWELL CODEX"

Beowulf, Oaths, and the Nowell Codex by Eric Tisch

The epic poem Beowulf recounts the heroic deeds of a stalwart warrior leader who becomes King of the Danes and sacrifices himself to provide for his people. It is narrated in the third person-omniscient style which includes distinctly Christian commentary and insertions.
The poem survives in one Medieval manuscript section known as the “Nowell Codex” which dates to at least the 11th century, although its exact composition date is unknown. This section of manuscript appears to have been compiled by one scribe and includes other works describing the heroic and monstrous such as “St. Christopher”, “Judith”, “Wonders of the East”, and a “Letter of Alexander to Aristotle” (British Library).
An explicit rationale has not been provided by the writer as to why these specific texts were combined in one artifact. This has led to continuous speculation about the inclusion of Judeo-Christian and non-Judeo-Christian tales in this codex. 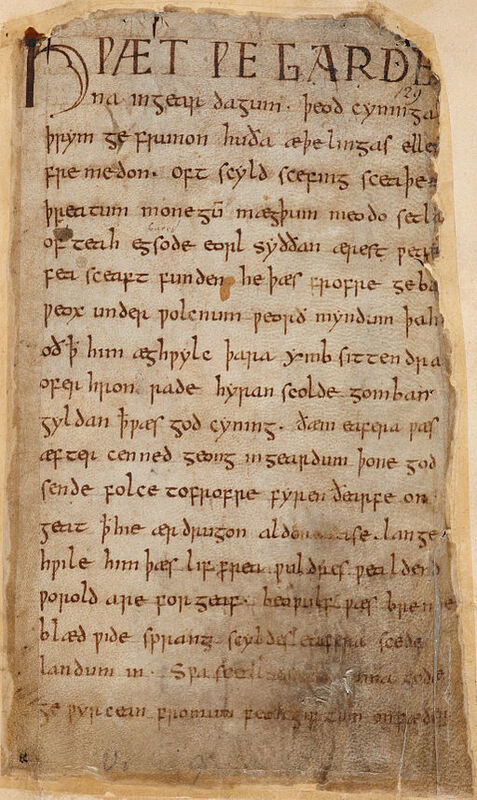 This research was conducted to compare the specific heroic code radiated by Beowulf with candid Biblical texts on the providence of God and the value of oaths. This in turn may allow an evaluation of Beowulf as an allegorical character whose actions are made to exemplify Judeo-Christian values while enduring (mythical) pagan obstacles.

Images of the Cotton MS Vitellius A XV, including those of the Beowulf pages, can be found through the British Library’s online resources. Translated copies of the Beowulf script to modern English are readily available online through resources including the Gutenburg Project. Quotations from the Bible are provided from the King James Version. The KJV was selected as it would have considered the manuscripts known to the poet ~600 years earlier for its own compilation employing the majority text method. Insights in to the hypothesized judicial and regional systems of Anglo-Saxons have been obtained though Helen Appleton’s December 24, 2016 contribution to The Review of English Studies. Obtaining an electronic copy of the Beowulf text in modern English was necessary to leverage online data analytic tools. For this assignment, I have used the Voyant-tools.org suite, which includes several modules to dissect large bodies of text to identify potential themes.

The exports from the Voyant-tools.org suite have been formulated to display a distinct timeline of the Beowulf plot. Key terms are selected to display a concept’s entry and frequency relative to the poem’s narrative.

Beowulf retells his deeds to establish his credibility before venturing on the quest given by Hrothgar.  However, once complete Beowulf insists that glory is given to God for their victory. On the concept of attributing glory to God on the basis provided “For all flesh is as grass, and all the glory of man as the flower of grass. The grass withereth, and the flower thereof falleth away:” (The King James Bible, 1 Peter 1:24), the terms
including ‘god’, ‘lord’, ‘thank*’ were selected.

Control of space is integral to the narrative of Beowulf. Helen Appleton discusses how demarcations of human control may have been understood by Anglo-Saxons. She posits that severed heads on sticks served as boundaries of a controlled area and concludes by remarking on the “fragility of human power” (Appleton, p. 446). This idea provides further insight to the concept of oaths, on the basis that their observed value in the
text is contrasted with their futility: “Again, ye have heard that it hath been said by them of old time, Thou shalt not forswear thyself, but shalt perform unto the Lord thine oaths: But I say unto you, Swear not at all…” (Matt. 5:33,34).

The Beowulf poet demonstrates advanced pragmatic Biblical knowledge in order for his protagonist to remain within the context of the Anglo-Saxon warrior culture while straddling the contrary and fundamental elements of Christian doctrine. The poet provides criticisms of the power schemes employed by Anglo-Saxons which faulter between each generation or even-more frequent crises. The Judeo-Christian voice of the poet
cannot be ignored and could be used as a comparison with the other works of the codex.

Given that two other texts of the Nowell Codex include Judeo-Christian narratives, I recommend that further study is conducted to compare the Christian poetic voice in each. This could further unite the set of otherwise dissociated tales.