A President is honoured 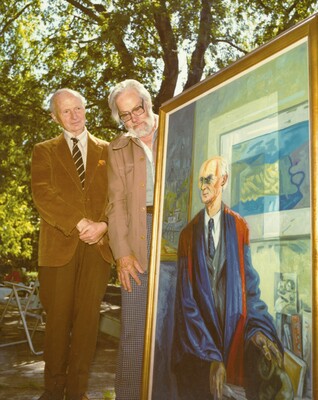 Friends and colleagues gathered on June 21, 1984 to honour James and Caroline Gibson and to celebrate the 20th anniversary of the founding of Brock University.   The friends commissioned Canadian artist,  Frederick Hagan to represent his likeness in oil.  The background of the portrait includes several symbolic images near and dear to Dr. Gibson.  Can you spot the Agnes P ?

The portrait was later presented to the University and today hangs in the Senate chambers. 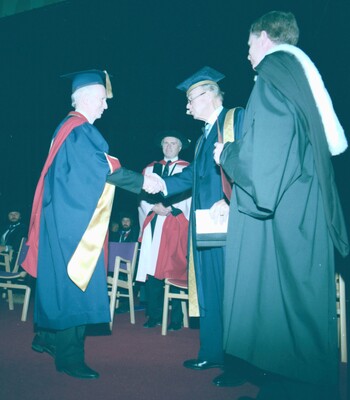 Dr. Gibson receives a congratulatory handshake from Chancellor Dr. R.S. Misener with Registrar Ron McGraw looking on.   President Alan Earp, behind, looks on with pleasure at the honour bestowed on his colleague.

On June 1, 1984, twenty years after its founding, Dr. James A. Gibson is honored by the University he helped found and steer through its first 10 years.

It’s an extraordinary commentary to think that more than 10,000 individuals have been given degrees by this university… What was striking about the first two or three convocations was the number of candidates for bachelor’s degrees who represented the first degree holders ever in their particular families.   That is what opportunity meant in this Region… I’ve never forgotten that.

A portion of the Doctor of Laws, Honoris Causa citation reads:

Mr. Chancellor, in recognition of his contributions to tertiary education in the Province of Ontario and to Brock University as its Foundation President and Vice-chancellor, I have the honour to present James Alexander Gibson to receive at your hands the Degree Doctor of Laws, Honoris Causa.     The citation was “prepared and delivered with humility and gratitude, sincerely Bill [Hull]. 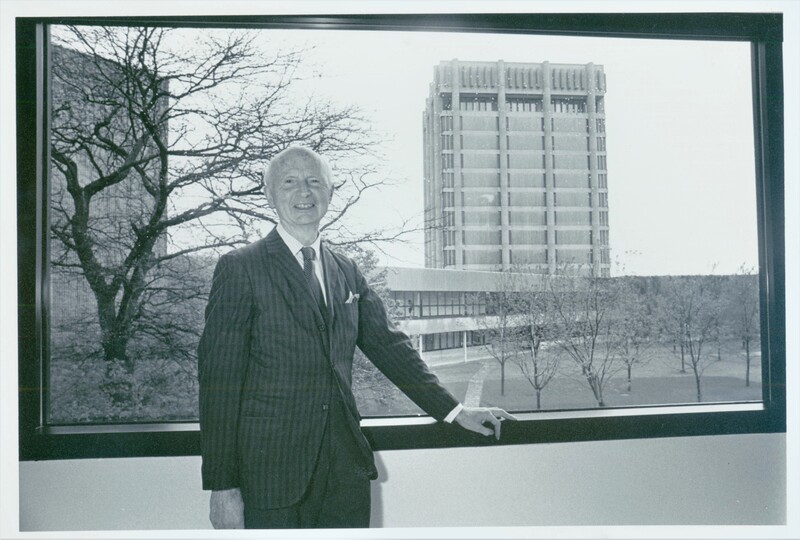 Brock University is 20!   Dr. James A. Gibson looks on in delight from his office window at the University he helped found.

In Dr. Gibson’s address to graduands on June 1, 1984, he recalls his first visit to the place that would take shape to become Brock University’s main campus.

The surroundings in which we assembled today have changed perceptibly over two decades.  When I first walked over these 400 acres of farmland, pine forest, a beaver pond and one stone house, the University was still a vibrant dream.  The farmland seemed a compassionable sort of place; part of it was to give way to roads and buildings and parking lots.  But trees were planted, and most of them flourished, and the Campus became a green and pleasant place.  I hope that the memories of Brock University you take away will be those of a goodly prospect with melodious sounds, and that to whatever tasks you may be called you will enter upon them resolutely and as from a goodly heritage. 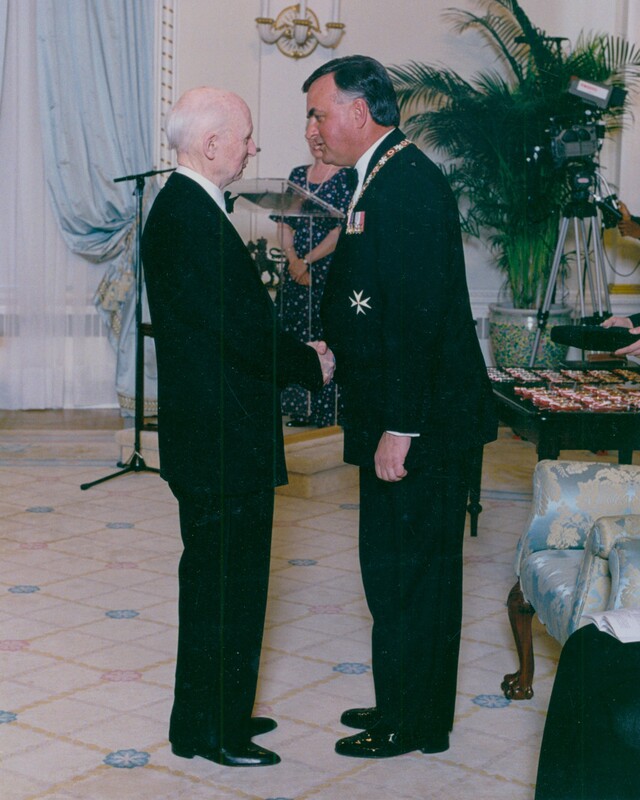 An able administrator and scholar, he has committed himself to higher education and to international justice and peace.  Founding father of two Canadian universities, he was one of the first full-time staff members of Carleton University and the first president of Brock University.  He also played a significant role in such august organizations as the United Nations and the Canadian Association of Rhodes Scholars. 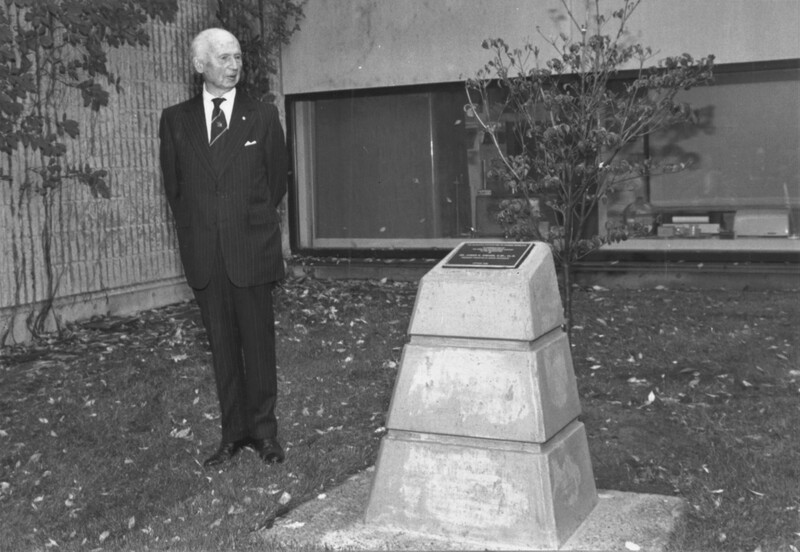 Dr. Gibson addresses fellow Rhodes scholars, colleagues, friends and family after the dedication of a dogwood tree planted in Pond Inlet in recognition of his contributions to the Canadian Association of Rhodes Scholars.

While James Gibson was president of Brock University, it required his personal approval for any tree with a trunk over four inches in diameter to be cut down.  So it was that planting a tree in his honor seemed a fitting way for the Canadian Association of Rhodes Scholars to recognize Dr. Gibson's contributions to the association, particularly as recently-retired editor of its newsletter.  He has also served as president and secretary-treasurer of the association. 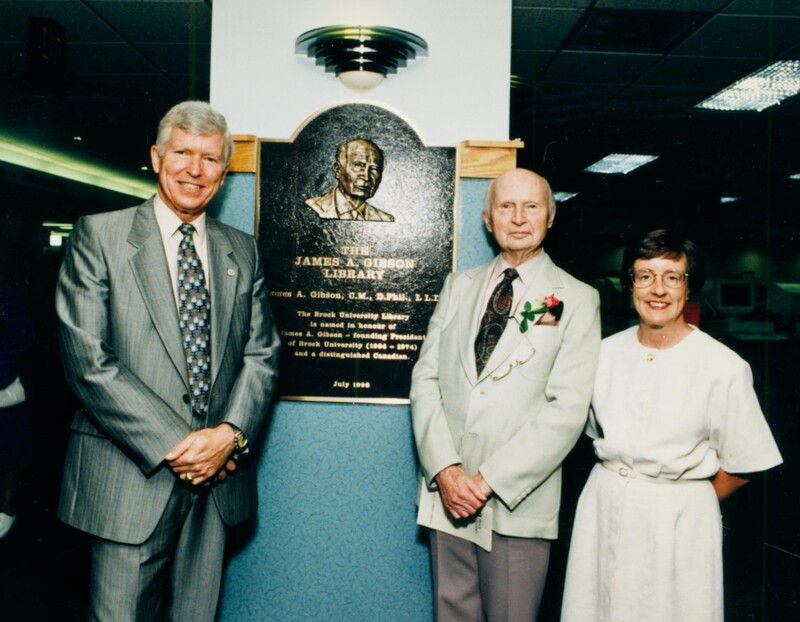 On a beautiful summer day in July 1996, Brock University took time to honour its founding president by naming the University Library after him.  Faculty, staff, colleagues, alumni, and friends and family joined in this terrific celebration.

Dr. Gibson reflected on the early days at Brock and the importance of a University Library.  Following are excerpts from his text.

The idea of the Library-in-a-tower took shape in his mind when he first saw the present Brock University precinct; typically enough, from the air, before he landed at Buffalo International Airport. The Tower-cum-Library was a facility of first importance. It was a statement, a presence, of high academic importance and, equally in the President's view, of academic self-respect and community identity, both of which have marked the growth and progress of the University.

The first accessions to the Library were shelved on the mantelpiece in the President's interim office at 15 Welland Avenue. Brock shared in the Ontario New Universities Library Project-the acronym was reversed as PLUNO- and in consequence Brock owned 3,000 volumes, catalogued and ready for circulation, before the first professional librarians came on strength.

The companionable folklore of Brock was enlivened during one memorable Saturday afternoon when faculty and faculty spouses set up shelves and added books to them. There also came a day when a staff librarian, acting on advice received, drove in a plain van with 50 dollars in hard money and bought the entire contents of a public library from which no books had been charged out for 30 years. Some treasures were thus acquired.

Since that time the Library has grown in stature and has flourished in usefulness, to faculty, students, staff and the wider community; it has thus earned an enviable reputation for what I once called a "quick forge and working-house of thought."

If my once-upon-a-time first words suggest a fairy tale, it becomes part of my duty on this special day to assure all of you, friends of Brock University at large, that the Library is real: a vibrant place of rich resources of books and periodicals and documents and recordings, the whole incorporating state-of-the-art technologies with skilled and devoted helpers under enlightened and far-seeing direction.

I began the fairy tale idiom in the third person; I now move to the immediate first person to confirm that I was/am the Founding President, and to acknowledge that the singular honor of giving my name to this Library is exceeded perhaps only by my original appointment nearly 33 years ago. For all that the honor signifies, and for the encompassing and ever-present assurances of belongingness within the University environment, I am humbly and proudly grateful.

Friends and colleagues joined together to celebrate Dr. James A. Gibson’s 90th birthday on January 24, 2002.   The afternoon was filled with fond memories and reminiscences by former colleagues, alumni and staff.   Dr. Gibson was gifted with the gown of the President and Vice-Chancellor that he designed some 40 years ago.

On February 4, 2002 the birthday celebrations continued.  It was only fitting that the founding president and Library namesake would then also celebrate his 90th birthday surrounded by students. 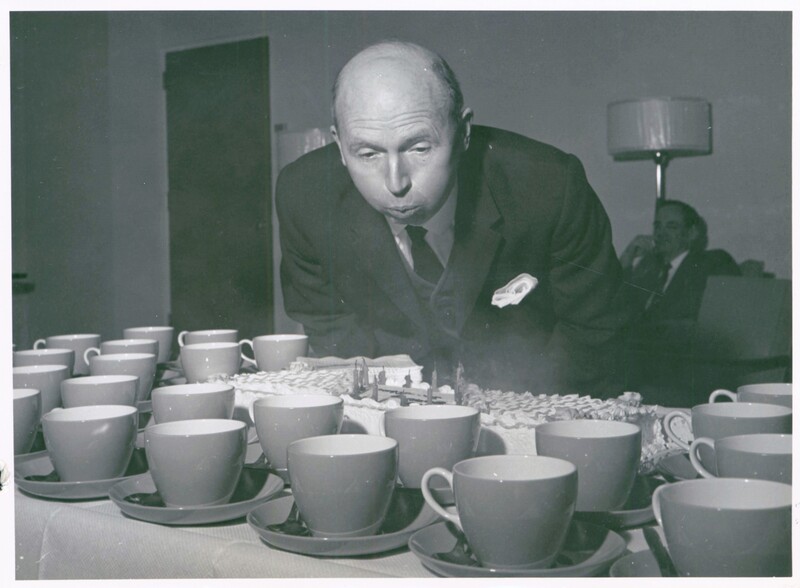 Blast from the past!   Dr.  Gibson blows out the candles on his birthday cake, January 1965. 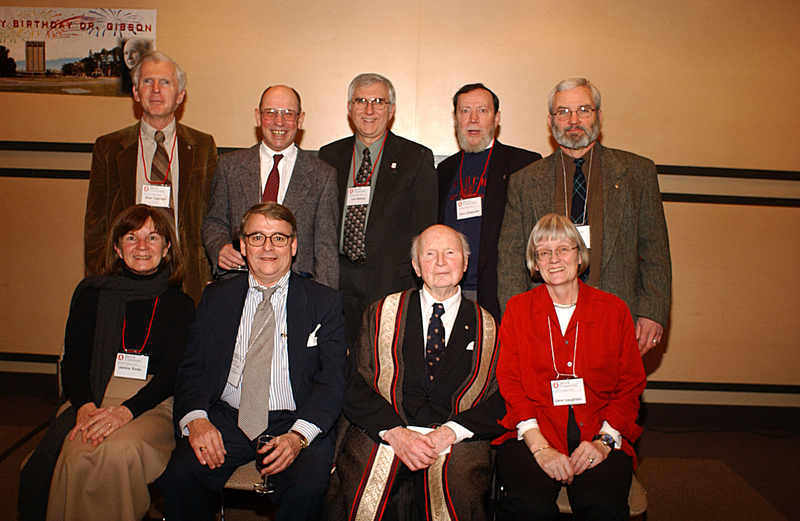 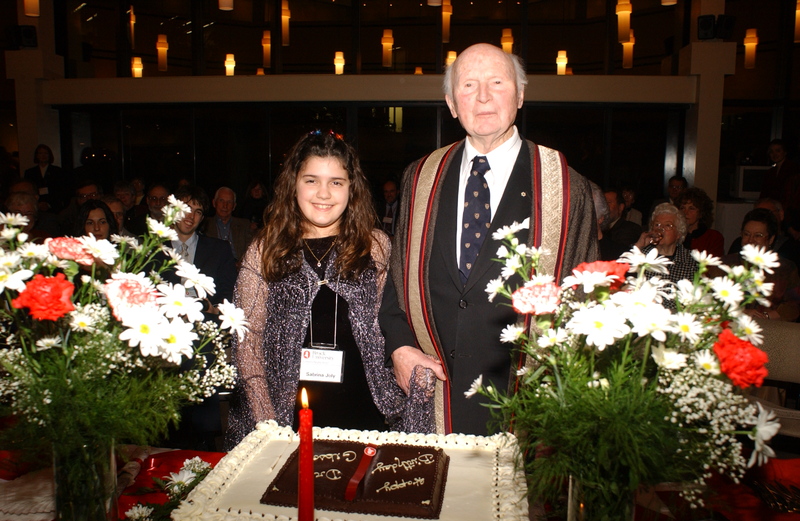 Dr. Gibson gets some help in the cake-cutting department from his great-granddaughter Sabrina Joly. 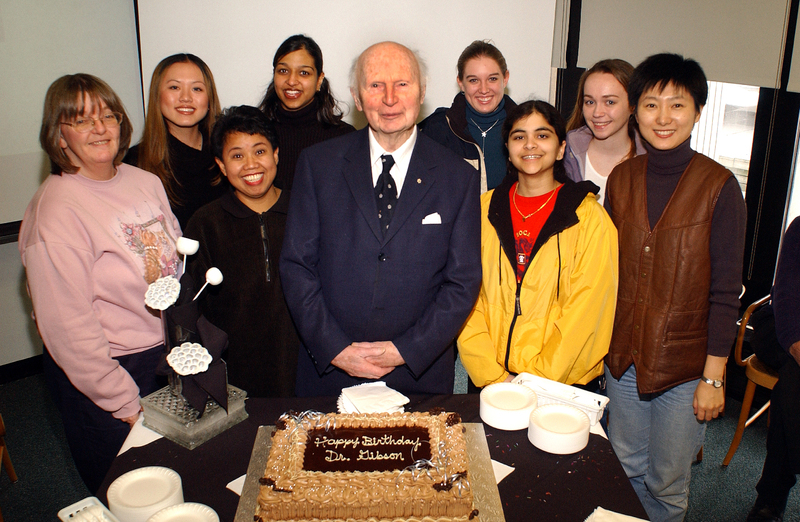 Later the next week the birthday celebrations continued.  Hosted by the James A. Gibson Library current students helped the founding president celebrate his 90th birthday.