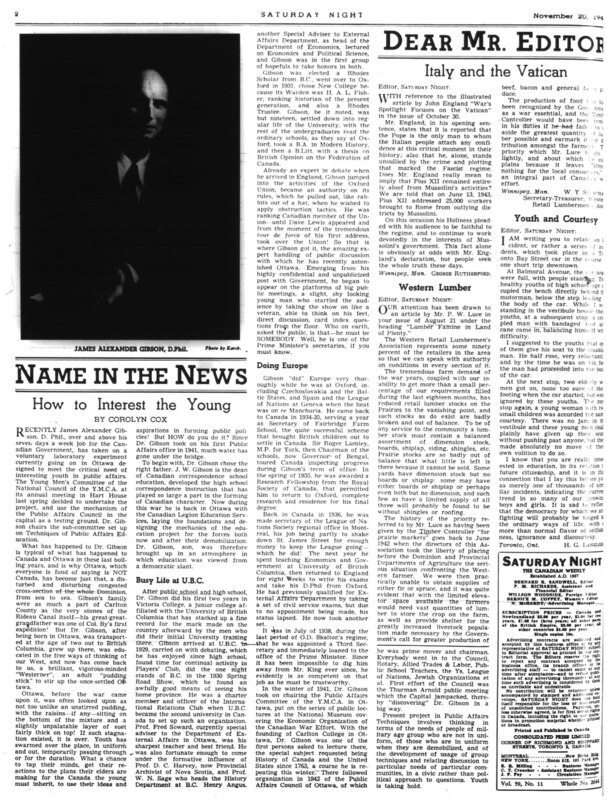 “a brilliant, vigorous-minded ‘Westerner’, an adult ‘pudding stick’ to stir up the once settled Ottawa”

After completing a Doctor of Philosophy degree Gibson returned home to British Columbia to lecture at the University of British Columbia.   He had previously written the exams to enter the Canadian foreign service and in 1938 he was hired to join the Department of External Affairs.   Gibson recalls that he was there all of 20 minutes when he was seconded to the Prime Minister’s office for the duration of his career with the federal government.

Gibson's duties varied, from drafting campaign speeches, assisting with the royal visit of King George VI and Queen Elizabeth in 1939, to  accompanying the prime minister to San Francisco to the first meeting of the United Nations, the meeting of Roosevelt and Churchill at the Quebec Conference in 1943 and the Paris Peace Treaties Conference in 1946.  He remained Secretary to Prime Minister W. L. Mackenzie King during the crucial war years until 1947 when he resigned to become a full-time professor of history at Carleton University. 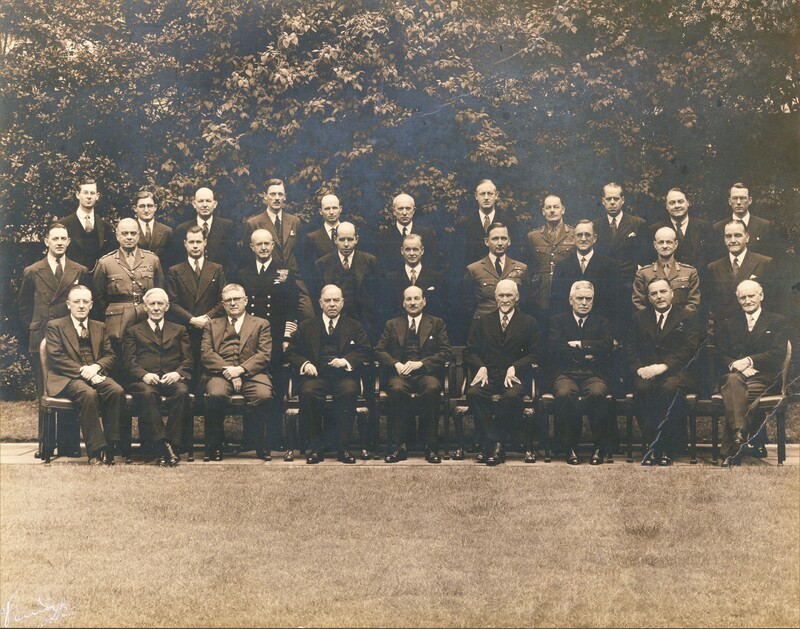 Meeting of Commonwealth Prime Ministers and their staff, 10 Downing Street, London, UK, May 22, 1946 Rt. Hon. W.L. Mackenzie King is seated fourth from the left.  Dr. Gibson’s colleague Norman Robertson, Under Secretary of State for External Affairs is in the second row 5th from the left and Dr. James A. Gibson is in the third row fifth from the left.

Upon resigning his position with Mackenzie King’s government to become one of Carleton University’s first history faculty, Dr. Gibson tells the story this way –

I went in to take my leave of the Prime Minister….(who) was a good deal more mellow than on same days, and he said ‘you’ve always been a sort of professor fellow, haven’t you?’ And I said, ‘well, that is what I was trained to be.  He said; ‘your heart’s really in it, isn’t it?’ and I said, ‘yes, it’s always been.’  “Well, where your heart is there shall also your treasure be,” he said.  And this was, in a sense, the kindest thing he said to me in nine years of slugging it out.