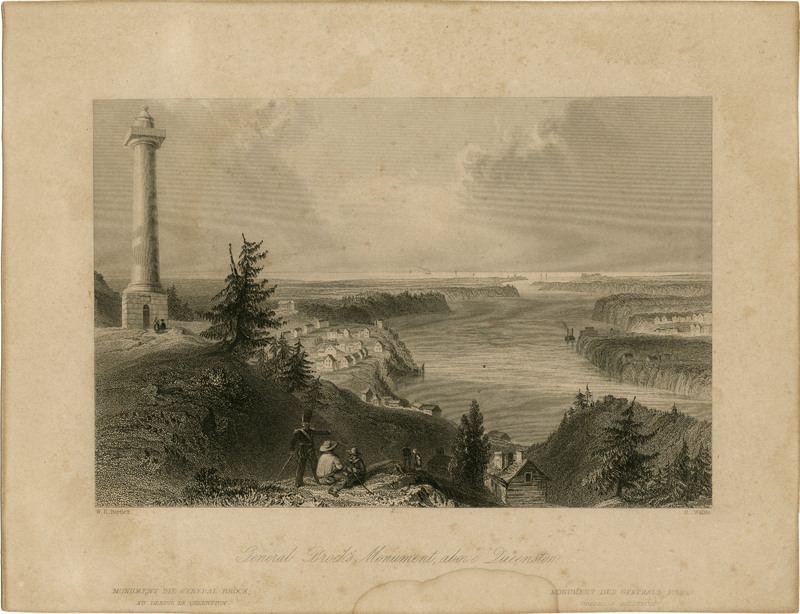 General Brock's Monument above Queenston, 1840.  This picture shows the original monument before it was damaged by an explosion.

In the years after the battle, efforts were made to honour Brock and those who had fought with him.  In 1814, the Upper Canada legislature designated £500 for a monument dedicated to Isaac Brock on Queenston Heights.  After many years of consultations and fundraising, the government approved a monument designed by Francis Hall.  It was to be erected in the military reserve on the edge of Queenston Heights.  In early 1824, Hall supervised the excavation and construction of the monument's foundation.  A tomb for Isaac Brock and John Macdonell were incorporated into the design.  On October 13, 1824, the remains of Brock and Macdonell were removed from the bastion at Fort George and buried in the tomb.  The procession from Fort George to Queenston attracted dignitaries and thousands of citizens.

The monument was completed sometime after 1827.  It was 135 feet tall and had a winding staircase in the column that led to an obersvation platform just below the summit.  It became a popular tourist attraction.  But the original monument would not last for long.  On April 17, 1840, a bomb exploded inside the base of the column, destroying the staircase, blowing off half the roof, and cracking the column.   Although the monument was still standing, it was considerably damaged.  It was widely accepted that Benjamin Lett, an Irish agitator with a history of rebellion and violence against the British, was responsible for the attack although this was never proven. 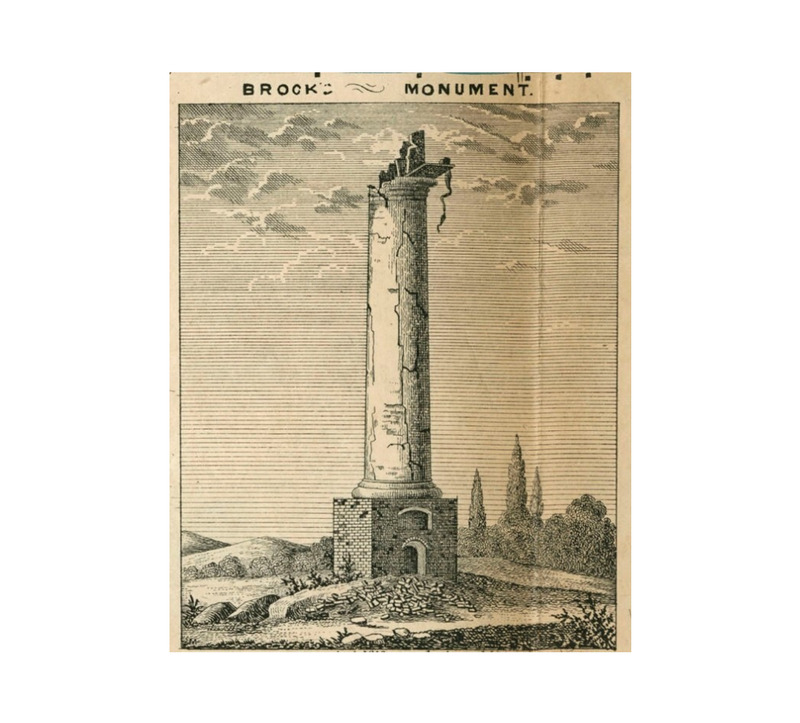 The public was outraged by the incident and a campaign for a new monument began.  It took thirteen years for sufficient funds to be raised and a new design selected.  In July of 1853, demolition crews worked to bring down the old monument with explosive charges, and the remains of Brock and Macdonell were once again removed.  They were temporarily interred in the Hamilton family cemetery on the grounds of Willowbank in Queenston.

The new monument, designed by William Thomas, was to be located about 200 yards west of the old tower.  The foundation and tombs for Brock and Macdonell were completed in time for their reburial on October 13, 1853, once again on the anniversary of the battle.  Between twelve and fifteen thousand people attended the ceremony.  Construction of the monument was completed in 1856.  In 1990,  it was designated a federal heritage building. 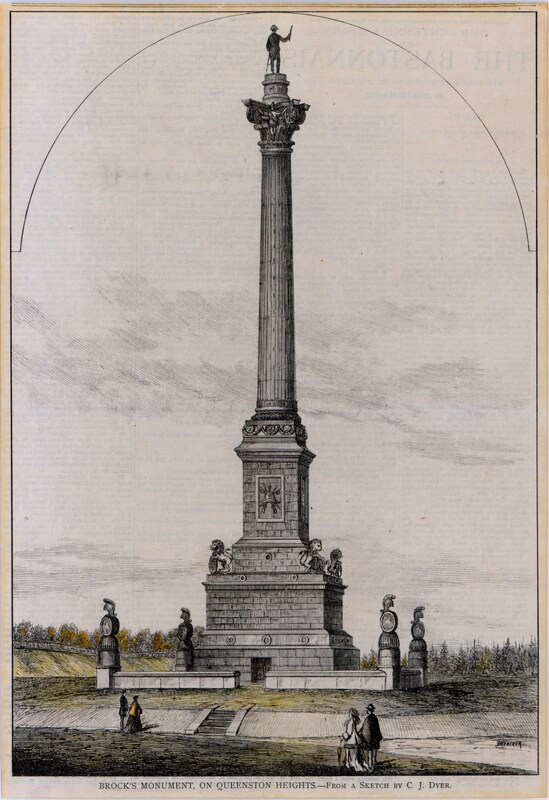 Brock's Monument on Queenston Heights.  This picture shows the second Brock's monument, constructed from 1853 to 1856. 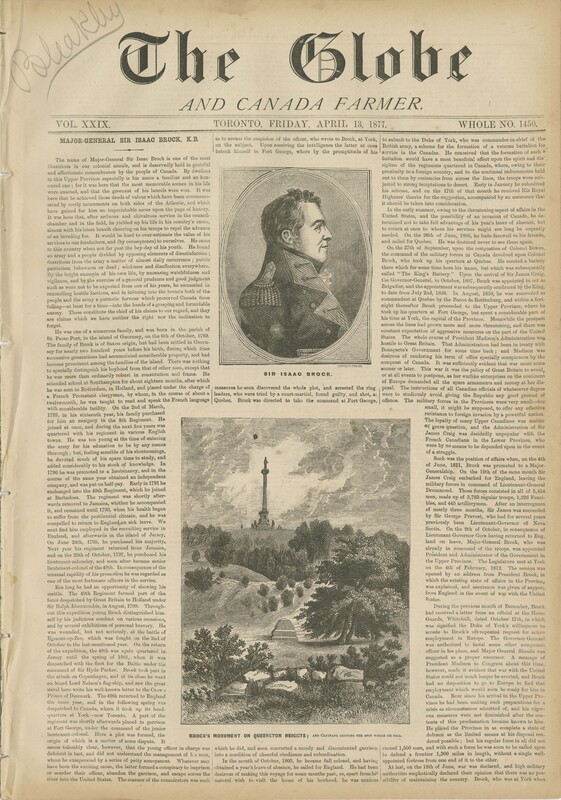 Brock's accomplishments were not just recognized by the inhabitants of Upper Canada.  Four days after his death, the Prince Regent appointed Brock an extra knight of the Order of Bath in recognition of his victory at Detroit.   And a memorial to Brock sponsored by Parliament can be found in St. Paul's Cathedral in London.  Even after more than a century and a half since his death, Isaac Brock's achievements continued to be celebrated.  Commemorative stamps and currency have been issued in his honour, both within Canada and his birthplace of Guernsey.

Isaac Brock has been referred to as the Hero of Upper Canada.   His victory at Detroit boosted the morale of the citizens of Upper Canada who quickly abandoned their defeatist attitude and became convinced that they could succeed against the Americans.  Brock's bold and intelligent leadership earned him the respect of his superiors, subordinates, and enemies.  And his manner of death, while leading a charge against the enemy, only reinforced his dedication to the defence of Upper Canada.

An article on Isaac Brock appearing in the Globe and Canada Farmer in 1877 describes Brock's accomplishments and legacy.  It is noted that, "...the name of Major-General Sir Isaac Brock is one of the most illustrious in our colonial annals, and is deservedly held in grateful and affectionate remembrance by the people of Canada.  By dwellers in this Upper province especially is his name a familiar and an honoured one; for it was here that the most memorable scenes in his life were enacted, and that the greenest of his laurels were won.  It was here that he achieved those deeds of valour which have been commemorated by costly monuments on both sides of the Atlantic, and which have gained for him an imperishable name upon the page of history... he succeeded in infusing into the breasts both of the people and the army a patriotic fervour which preserved Canada from falling -- at least for a time -- into the hands of a grasping and formidable enemy.  These constitute the chief of his claims to our regard, and they are claims which we have neither the right nor the inclination to forget." 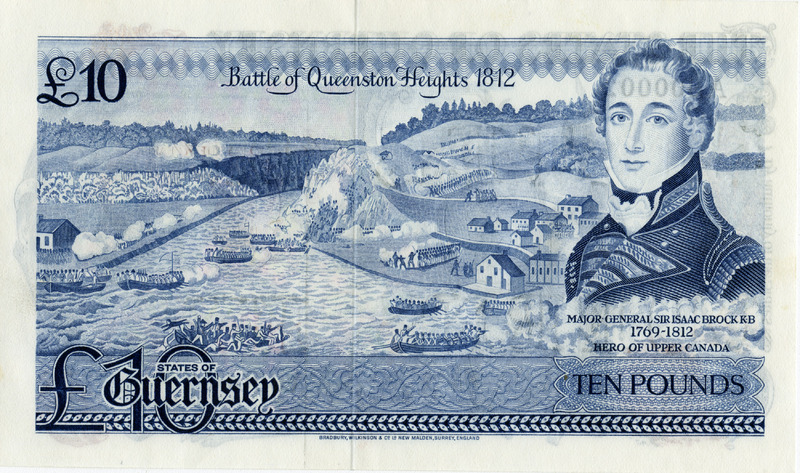 In 1975, the States of Guernsey issued a ten pound note commemorating Isaac Brock and the battle of Queenston Heights.