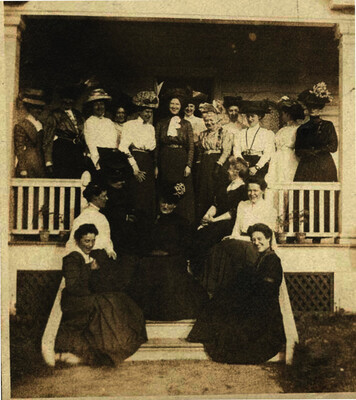 The first meeting of the club is best recounted by Isabel Brighty in an article written many years later in 1932.  She describes the initial meeting as follows:

"On December 3rd, 1892, a small group of St. Catharines women met in the Y.M.C.A. on Queen Street by invitation of Mrs. J. G. Currie and Mrs. W. H. McClive to organize a study club for women.  Thus the Women's Literary Club, one of the oldest of its kind in Canada was born.   Officers were elected with Mrs. McClive as president; Mrs. D. M.  Walker, secretary;  and Mrs. Currie treasurer." 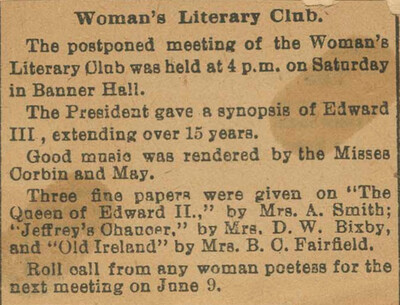 The early meetings of the club involved the women presenting their personal literary works and some musical performances by the members. The literary pursuits that would dominate the agendas for the entire life of the Club reflected an interest in selected authors, national and local history, classical history, musical performance and newsworthy events. Within the first year of the club’s existence, they began to keep minute books and they decided to create an annual agenda/programme. 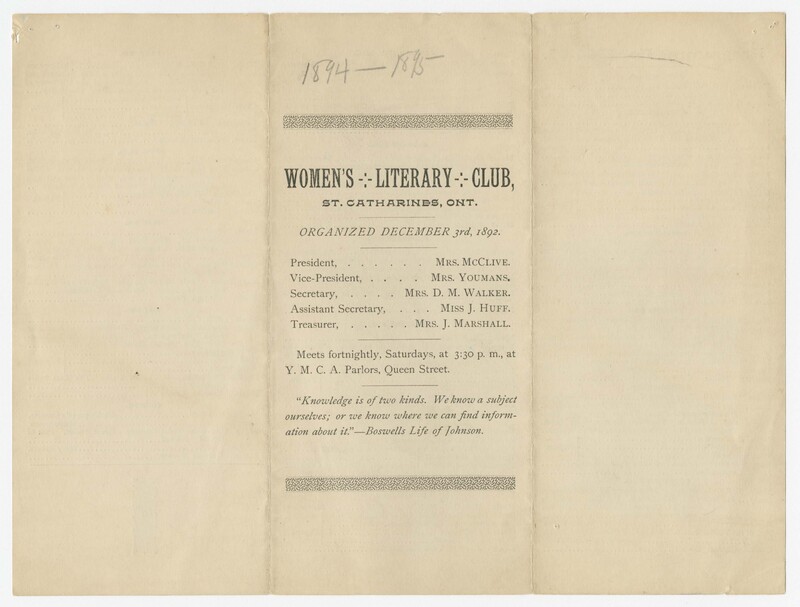 The club would announce their meetings through the local newspaper, including the contents of each gathering.  Contained within their scrapbooks are clippings which mention the location of each meeting, those that presented (whether essays, music, poetry etc.), and an announcement for the next club gathering.  Some of the presented works included:  Valentine folklore, Algonquin park, Dr. Ryerson, Business Knowledge for a Woman,  Women Composers and Teachers of Music, A Teacher's Experience with Forge Children, Queen Victoria, Alfred Lord Tennyson, Elizabethan and Modern Drama, Scotland, Western Canada, Charles Dickens, Six Nations Indians, and Australia.