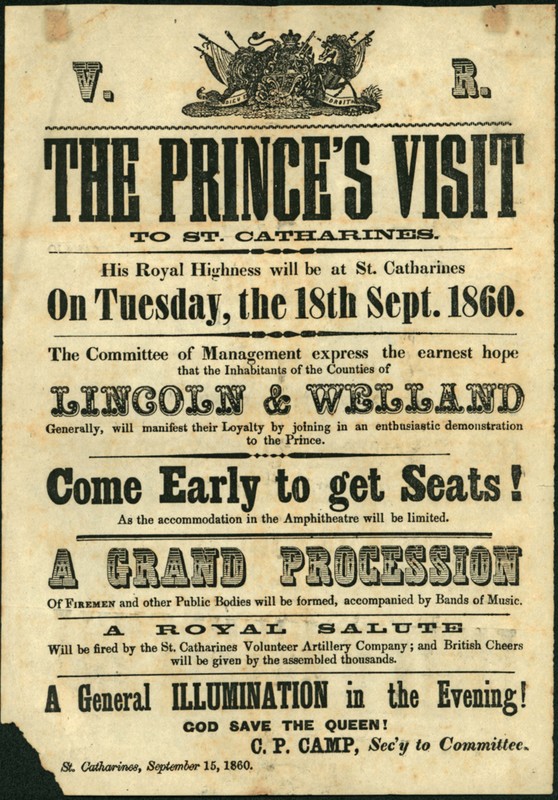 Broadside announcing the Prince of Wales' visit to St. Catharines, 186

The fact that St. Catharines was even a stop was an accomplishment. The city applied to be part of the route in April when the tour was first announced.  For reasons still unknown, the Governor General of Canada, Sir Edmund Head, was against having St. Catharines on the itinerary.  City officials did not find out that the Prince was coming until late August - just weeks before his arrival.  And even then, no specific date was given.  On September 13, they were told that Albert Edward would arrive in four days.  This was amended from September 17 to the 18th a few days later.

The day was declared a public holiday but there was much work to be done.  All the buildings along the planned route were decorated in emblems, slogans, flags and illuminations.  Eight ceremonial arches of varied motifs were quickly assembled for the Prince to pass under.  The firemen built an arch using ladders interlaced with hoses.  The area around the Shickluna shipyard had a huge arch with a nautical theme.  The one arch that received the most attention was created entirely of stacked flour barrels.  This was noted as both of "rather unstable appearance" and "handsome and well proportioned."

When the Prince arrived, St. Catharines showed its worth. More than 15000 people lined the streets to greet him.  At the formal reception, five hundred children sang 'God Save The Queen' at the dedicated pavilion.  And the City was able to get the last laugh on the Governor General.  When it came time to drive the Prince to the train station, instead of taking the shortest route, the procession led him through three more decorated streets at a more leisurely pace.  Head was furious with the improvisation and gave the local Member of Parliament William Hamilton Merritt a good scolding at the station.  Merritt claimed his innocence from the matter.

All in all, several members of the Prince's party noted that St. Catharines had one of the best receptions during their stay in Canada West (Ontario).