This is the travel journal of Commodore George Henry Seymour who commanded the HMS Hero during the Prince of Wales' visit to Canada in 1860.  Entries are dated from July 9 to November 6, 1860. The journey begins from Plymouth Sound (England), crossing the Atlantic, and with subsequent entries at St. John's (Newfoundland), Sydney, Halifax, Picton, Charlottetown, Quebec, Montreal, Ottawa, Kingston, Belleville, Toronto, Niagara, Halifax, and Portland, Maine.

After Niagara, the Prince traveled predominantly by rail during the last portion of the visit. Seymour sailed back to the East coast and met the Prince in Portland, Maine where they began their journey back to England.

Some excerpts from the journal:

The Evergreen arches and decorations of every house in all the places we have visited have been simply beautiful and nothing could have exceeded the loyalty shewn in each Province.

I accompanied the Prince who again went to the Saguenay to fish. Went up the Marguerite rapids in canoes. Great fun.  Hooked a salmon but lost him.

To Church at the Cathedral. Our carriages drove some distance round to avoid passing under the obnoxious arch and the consequence was that the Orange Men got angry and during church service we heard much cheering which was caused by these pigheaded irishmen replacing the Orange banner that had been taken down the day before.

Went by rail to Sarnia. Addresses presented and a spoken address was made by a very fine looking Indian Chief in his own language.  He was surrounded by other chiefs and at the conclusion medals were given to the Head men by HRH.

The Prince went under the falls. I waited above having committed that folly on a previous occasion.  ...then rode to a place a little below the suspension bridge where Mr. Blondin (a Frenchman) performed his wonderful feat of crossing over the river first alone, then with a man on his back, and then on stilts.

Afterwards took a long ride with almost all the party about Lundy's Lane... In the evening, Skittles (a form of bowling) at the Hotel. 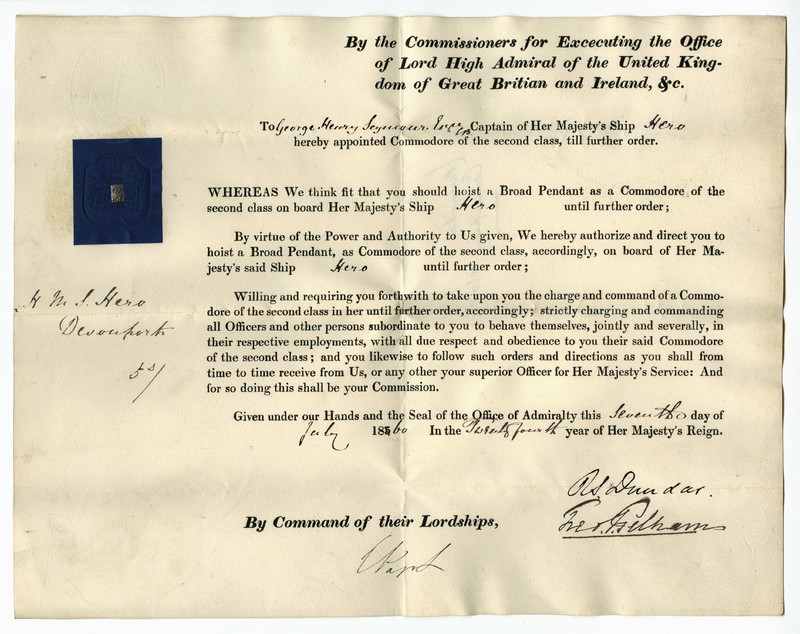 The appointment of Commodore Seymour to command the HMS Hero issued two days before the trip was to begin.