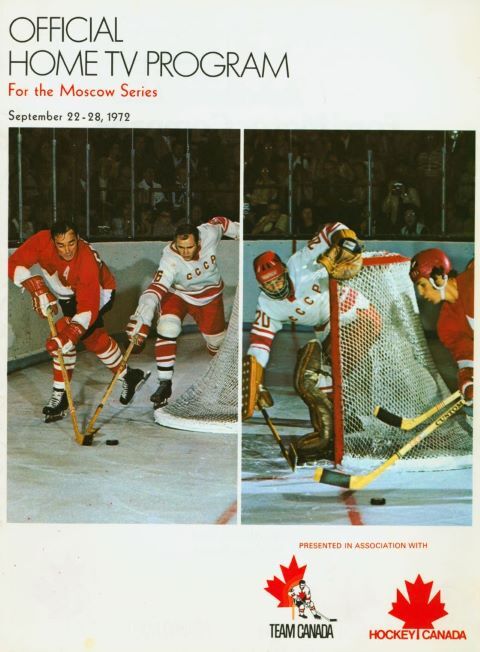 The 1972 Summit Series pitted Canada against the Soviet Union in an eight game hockey exhibition featuring the best players from both countries. The result was a dramatic display of athleticism, heart, and nationalism.

The Vickers & Benson advertising agency, led by Terry O’Malley, was contracted to organize the television broadcast and as a result of their participation, V&B helped form the identity of this iconic Canadian hockey team then and into the future.

“Our role started to take shape. Alan Eagleson wanted to call the team the NHL All-Stars. We tried to convince him this was not a series between Russia and the NHL, but Russia and Canada. This was for, remember, hockey supremacy and national pride. He agreed. 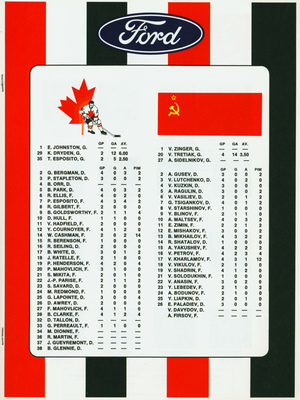 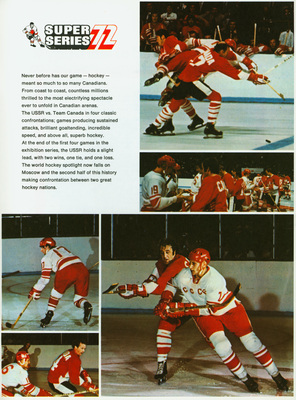 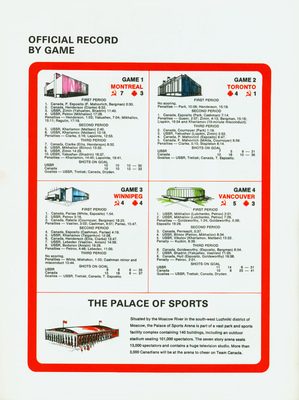 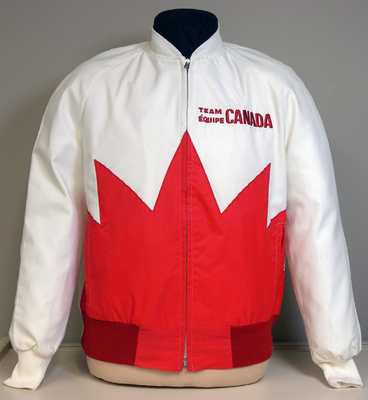 “We needed a sweater. I was working closely at this point with an amazing art director named John Lloyd, a transplanted Brit, whose visual sensitivity was brilliant. As I mentioned, everything was moving at warp speed. We not only required the sweater, but we needed home and away versions by, you guessed it, tomorrow.

John had bought two large red and two large white sweaters. He cut out the now famous stylized maple leaf in red and in white. He then stitched the red on the white jersey for home and reversed the process for the away. Simply brilliant.

The press conference went off as if planned for months, and for all intents and purposes it was game on.” 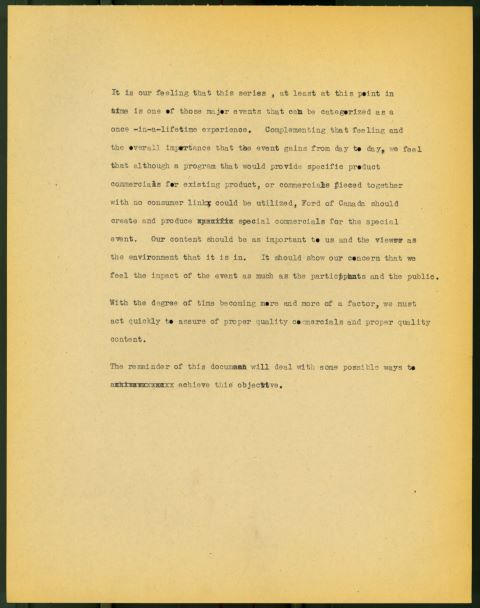 The Summit Series had the potential to be a huge marketing opportunity for businesses.  To the right is a page from a rough draft of an advertising  pitch to Ford of Canada that states, "It is our feeling that this series, at least at this point in time is one of those major events that can be categorized as a once-in-a-lifetime experience."  Prophetic words written by Terry O'Malley.  But the way the Series played out put a tremendous amount of stress on the folks at V&B.

Sponsors had to be found quickly. Ron divided the event into sixths. Without asking, V&B committed our clients Ford for one-third, CCM for one-sixth, and the same for Standard Brands.

The Russians began to come back and then to completely dominate the four games in Canada. We had another fleeting thought… What if they continued to do this, and Canadians would not be pleased watching their heroes be blown away.

As you know, it became possibly the greatest hockey series of all time. In the world of media measurements, cost per thousand of audience was how things were judged. Ron estimated that for game eight and the Henderson goal, we had the largest audience in Canadian history. If you were around at the time, you’ll remember the streets were empty during the telecast.

The entire duration of the rivalry was full of drama and stories. It was a coming out party for Canada. It was an adventure.