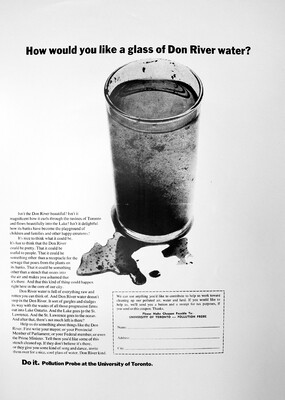 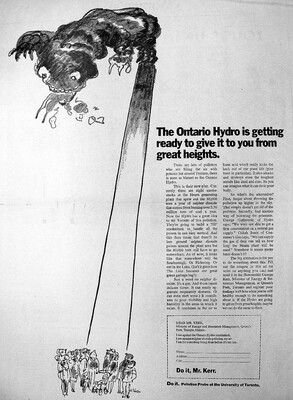 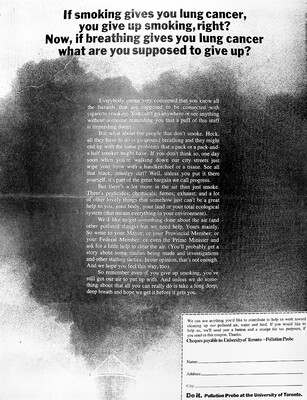 Founded in 1969 by students and faculty at the University of Toronto, the Pollution Probe quickly rose to become the foremost name in Canadian environmental activism through the 1970s.

The Pollution Probe caught the attention of Terry O’Malley in the summer of 1969.   The environmental message clicked with him: “I thought this was a chance for me to try to do something that I hadn’t even thought of before.  I called them up and said anything I could do I would do pro bono.”

Vickers & Benson came on board to create ads that revealed the issues and encouraged the public to get involved.

The first Pollution Probe print ad appeared in the Toronto Telegram on 29 September 1969 - "How would you like a glass of Don River water?" Many similar ads followed in the subsequent months.

In the print ads, there were two options for the readers: 1) make a financial contribution to the Pollution Probe, and 2) write their elected officials.  This was central to the Probe’s message that the public was empowered to act on behalf of the environment.

Vickers & Benson also created television commercials for Pollution Probe.  In 1981, the commercial “Nice World” was inducted into the Clio Award Hall of Fame as an international television classic – one of only two Canadian commercials to ever receive this honour.

With the assistance of Terry O’Malley and V&B, the Pollution Probe had over 50 independent affiliates operating in five provinces within two years.  As Peter Middleton, one of the Probe’s first employees, notes, the V&B connection “...made an impact. It made us look professional” – a significant achievement for an upstart organization with limited funding.

Through the years, the Pollution Probe ads won numerous awards nationally and internationally including: