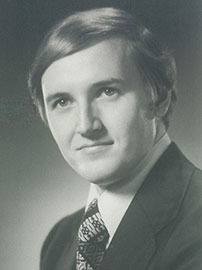 Sean O’Sullivan (1952-1989) was elected to the Canadian House of Commons in 1972.  He was twenty years old at the time, making him the youngest Member of Parliament in Canada.  His political career, although brief, was notable.  A chance meeting with Prime Minister John Diefenbaker in 1963, when Sean was just eleven years old, marked the beginning of his involvement with the Progressive Conservative Party.  Diefenbaker became a mentor to Sean, and the two exchanged correspondence for many years.

Sean’s political career began shortly after his meeting with Diefenbaker.  He quickly rose to prominence when appointed as Diefenbaker’s Executive Assistant in 1971, followed by his election to the House of Commons for Hamilton-Wentworth in 1972.  Many people thought that he was certain to be a Canadian politician of great prominence, perhaps even Prime Minister.   However, he abruptly left politics in 1977 to pursue another career.