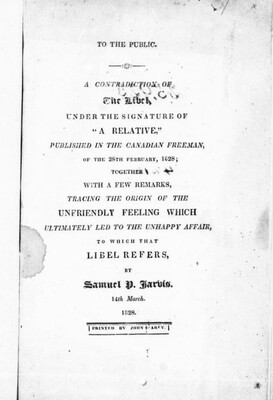 Title page from Samuel Jarvis' account of the duel with John Ridout, 1828

A duel with John Ridout on July 12, 1817, had longstanding repurcussions for Samuel Jarvis.  There had been bad feelings between the families for a couple of years preceding the duel.  In 1815, a misunderstanding about money owing to the Ridout family by Samuel Jarvis  almost led to a duel between Jarvis and George Ridout (John's brother).  The duel was averted after a mutal acquitance, Reverend Strachan, negotiated an amicable settlement.  However, resentment lingered between the families.

About a year later, John Ridout, a law student, was conducting a lawsuit against Samuel's father.  Samuel was trying to settle the lawsuit.  The two parties agrued, with Jarvis ordering Ridout out of his office.  A few days later, the two met in the street and became violent.    The fight was broken up by Captain Fitzgibbon and Dr. Horne.  A few days after this incident, Ridout challenged Jarvis to a duel, which he readily accepted.  The duel was held on July 12, 1817, at the corner of Yonge and College Streets in Toronto.  Ridout was killed by Jarvis in the duel.   Although he was exonorated by the courts, the affair split the local elite and was not quickly forgotten.