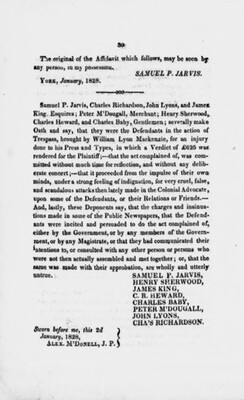 Affidavit from Jarvis and other defendents in the printing press incident, 1828

Samuel Jarvis, along with other members of the Family Compact elite, were sometimes criticized.  A frequent critic was William Lyon Mackenzie, who owned The Colonial Advocate newspaper.  He often used this platform to criticize the ruling Tory government, and in a May 1826 issue called Jarvis a murderer for his role in the duel with John Ridout.  In retalitaion, Jarvis and others organized a raid on Mackenzie's York office on June 8, 1826, smashing his printing press and throwing equipment in the bay.  Mackenzie sued the major participants, and was awarded £625 for damages, which was collected by subscription from members of the Family Compact, and from Jarvis.

Jarvis admitted his guilt in an affidavit and gave an account of the incident.  In his Statement of facts relating to the trespass on the printing press in the possession of William Lyon Mackenzie in June 1826, he noted that "There were, in Mr. Mackenzie's eyes, sufficient reasons...for stigmatizing me in his paper as a Murderer."    He goes on to defend his actions, stating that:

"I only desire any person to turn to his paper of the 18th May 1826, and... to ask himself, weather it is not expecting too much...that the person who had dared to propogate these odious slanders, could, walk the public streets, with impunity, enjoying with a malignant smile, the pain he had inflicted.  My belief is, that he thought and felt it unsafe to make the experiment; for he could have hardly done otherwise than expect the same chastiement here, which, for much less provocation, he had more than once received in other parts of the province. "