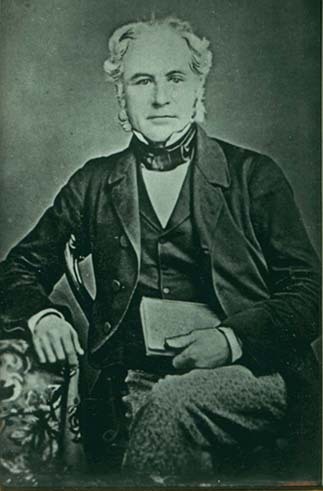 Samuel Peters Jarvis (1792-1857) was a prominent figure in early colonial Upper Canada.  He was from a priveleged family, being the eldest son of William Jarvis, the first provincial secretary and registrar.  He served as a militia officer during the War of 1812, where his company helped secure victories at Detroit and Queenston Heights.  He went on to study law, become clerk of the crown in chancery in the House of Assembly, and Chief Superindentent of Indian Affairs.  His ambition was to follow in his father's footsteps and become the provincial secretary and registrar, but he remained as clerk of the crown for the next 20 years.

His volatile personality caused problems on many occasions, most notably in 1817 when he quarreled with John Ridout (son of Surveyor General Thomas Ridout) and killed him in a duel.  The affair split the local elite.  Although he was exonerated by the courts, the incident limited his career opportunities.

In 1818 he married Mary Boyles Powell, daughter of Chief Justice William Dummer Powell.  This connection with the Powell family further secured Jarvis' position as a member of the ruling elite in Upper Canada, known as the Family Compact.

This exhibit explores some of the highlights of Samuel Jarvis' life, using material primarily found in the Jarvis Family fonds in the Brock University Archives.