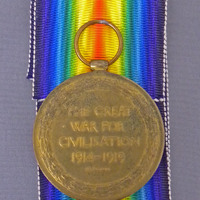 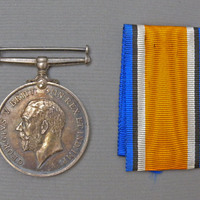 Victory Medal (Inter-Allied War Medal) which was awarded to all ranks of fighting forces. This is a circular, copper medal, lacquered bronze. It measures 3 1/2 cm in diameter and has a picture of Victory on the front. Her left arm is extended and in her right hand she holds a palm branch. The reverse shows the words "The Great War for Civilisation 1914-1919" surrounded by a wreath. This is accompanied by a watered ribbon consisting of 9 coloured stripes. "Lieut. S.D. Woodruff" is engraved on the rim. This engraving was only done for the first issue in 1914-1919.

This British War Medal was issued to those who had to leave their native shore in any part of the British Empire while they were on service. This is a silver circular medal, 3 1/2 cm in diameter. King George V is depicted on the front and St. George is on the back. This is accompanied by a watered silk ribbon which has a central band of gold and stripes of white, black and blue on both sides. "Lieut S. D. Woodruff" is engraved on the rim. This was issued 1914-1918.