An early report of the Caroline incident published in the American newspaper The Corrector, January 11, 1838.  The number of deaths in this initial report is greatly exaggerated.

Mackenzie found allies in many Americans, who were sympathetic to his fight for government reform and more freedom from British rule.  While regrouping with his supporters on Navy Island, Mackenzie chartered the American steamer Caroline to bring supplies to the rebels.   In an attempt to hinder the rebels' efforts, Commander Andrew Drew of the Royal Navy led a group of the Upper Canada militia to Fort Schlosser on December 29, 1837, where the Caroline was moored.  A brief skirmish with the Americans ensued, during which an American citizen, Amos Durfee, was killed.  The Caroline was then set on fire and cut loose, drifting down the River towards the Falls. 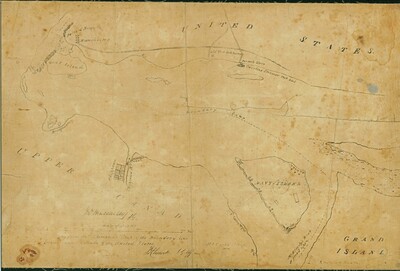 Map showing the action around Navy Island during the Rebellion of 1837 and the spot where the Caroline steamer was cut out, 1838.

This incident escalated tensions between the United States and Great Britain, and angered American citizens.  The mayor of Buffalo issued a proclamation regarding these events on December 30, 1837, writing that:

"the report that outrages have been committed by persons from Canada on the lives and property of our inhabitants, has justly excited that spirit which is so worthy of American citizens.  All legal measures will be promptly taken to prevent any further aggression; and you will be called upon as fast as your services are required.  In the meantime I enjoin you all to act with discretion, and only under the direction of proper authorities." 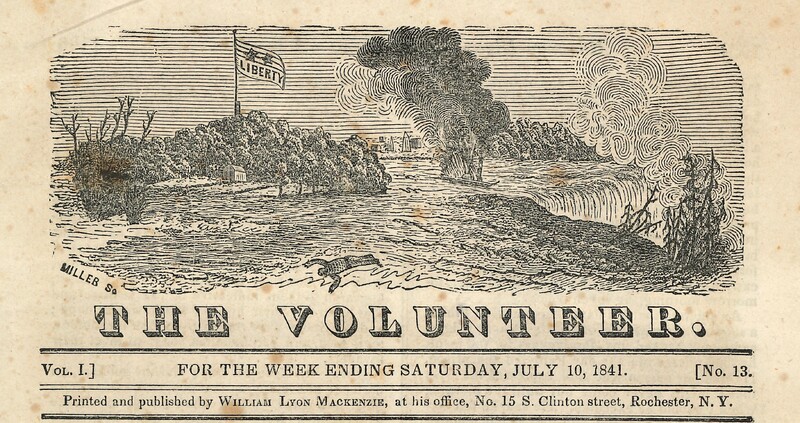 The banner from Mackenzie's newspaper "The Volunteer", July 10, 1841.  The sketch shows the Caroline in flames, with the body of Amos Durfee in the foreground.