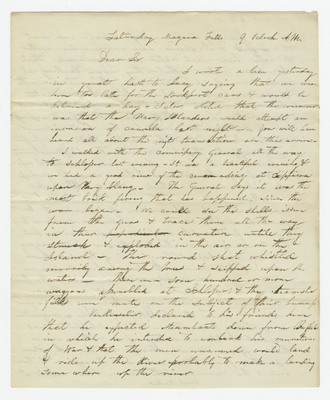 A letter by J.W. Clark of Buffalo describing the events after the Caroline incident, January 15, 1838

The Caroline incident created much instability and uncertainty along the Canada-U.S. border in Niagara.   Andrew Relph of Buffalo wrote in a letter that "the burning [of] the Caroline and murdering the men will make a long black mark that won't be forgot in one week or year".  Rumours about retaliatory action and war were rampant.

A letter by John Clark of Buffalo describes the events during that time.  He writes about rumours that the rebels on Navy Island had planned an invasion of Canada, and describes the British cannonading at Chippewa upon Navy Island.   About these events, Clark writes "with the disappointment & failure & the brisk charge from Canada I hope will bring the Islanders to their senses & perhaps all will now be settled without incurring the awful retaliatory consequences of an invasion of Canada & probable defeat".

He continues, writing that "I have just talked with a man & his wife from Toronto day before yesterday--They were obliged to leave because the man would not take up arms.  They talk hard about the tories in Canada and hope McKenzie will succeed--they think the war is not begun yet.  They think there are forces enough at home to revolutionize without the help of the states people..." 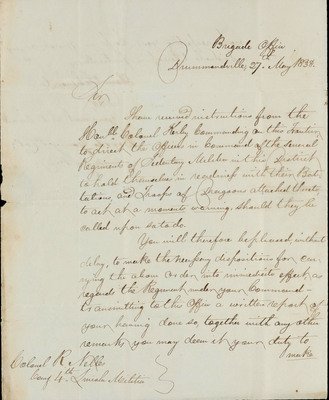 Letter to Colonel R. Nelles, Commander of the 4th Lincoln Militia, 1838.  The letter instructs the militia to be ready to act at a moment's notice, May 27, 1838 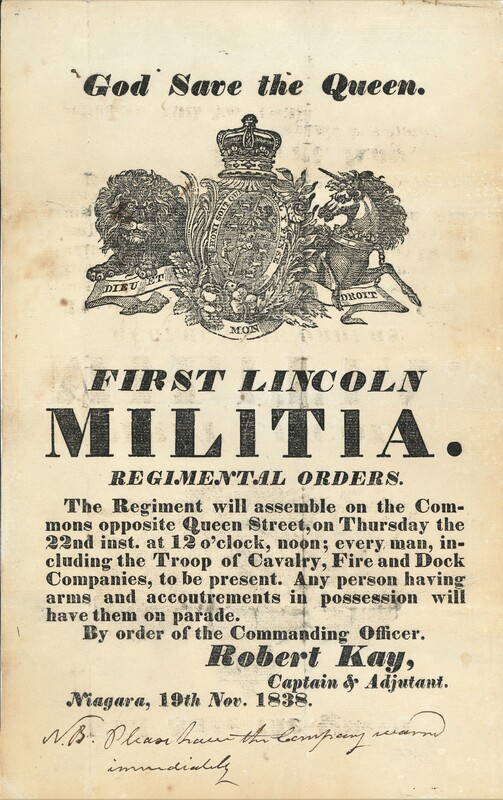 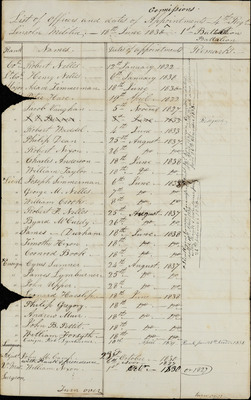 List of officers and dates of commissions in the Lincoln Militia, 1838.  These officers would have responded to the rebellion. 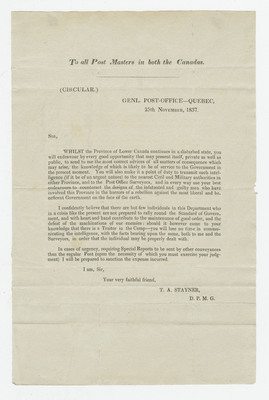 A circular to postmasters about the political unrest and the duty to report traitors, dated just days before Mackenzie's rebellion near Toronto, November 25, 1837.

The government in Canada feared that the rebels' American allies might gain the support of the U.S. government, who might then seize this opportunity to invade Canada.   The House of Assembly considered these American citizens to have breached neutrality laws and wanted assurances from the U.S. government that it had no intention of supporting the rebels.  To this effect, the House of Assembly passed resolutions in 1838 on the subject of breach of neutrality and aggression.

The Canadian government also worked diligently to suppress any rebels.  The Lincoln Milita was ordered to be ready to be called into action.  Even postmasters were  informed of their responsibility to report traitors and pass on any pertinent information to authorities.