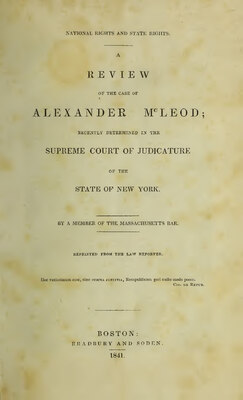 Title page from a review of the case of Alexander McLeod, 1841

Hostilities between the two countries did not abate quickly.  The matter escalated in November 1840 when Alexander McLeod, deputy sheriff of the Niagara District (Upper Canada), was arrested while in Lewiston, New York, for the murder of Amos Durfee.  It was alleged that he had openly boasted about his participation in the Caroline affair.    There was no direct evidence to support this claim, but McLeod was nonetheless indicted for murder and arson.

The British Foreign Secretary, Lord Palmerston, insisted that McLeod be released.  He argued that the Caroline incident was authorized by Canadian authorities and, as such, McLeod could not be held personally responsible.  Palmerston stated that should McLeod be convicted and hanged, there would be retaliatory action from Britain. 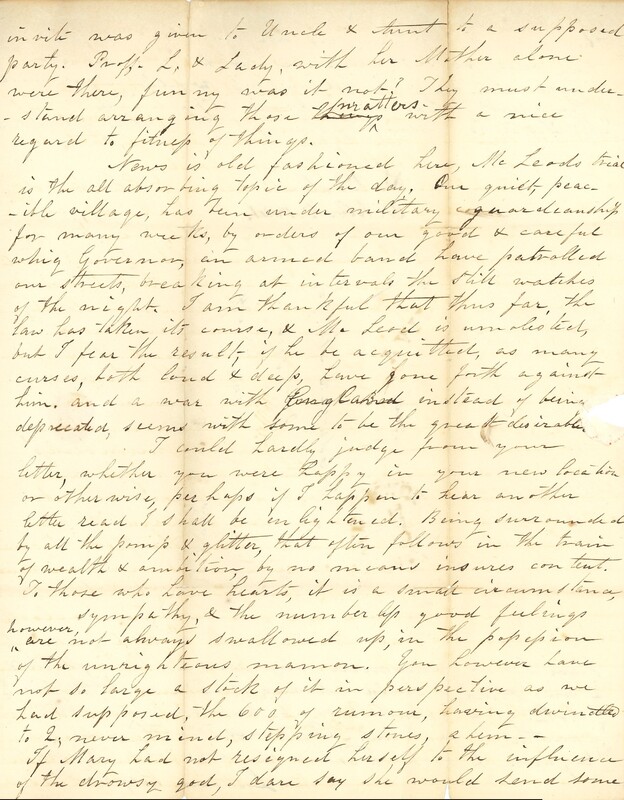 A trial for Alexander McLeod was held in October 1841 and was closely followed by the public.  Laura Dexter of Whitesborough, New York, wrote a letter around this time, noting that:

"McLeod's trial is the all absorbing topic of the day.  Our quiet, peacible village, has been under military guardianship for many weeks, by orders of our good & careful whig Governor, an armed band have patrolled our streets, breaking at intervals the still watches of the night.  I am thankful that thus far the law has taken its course & McLeod is unmolested, but I fear the result if he be acquitted as many curses, both loud & deep, have gone forth against him.  And a war with England, instead of being deprecated, seems with some to be the great desirable".  Alexander McLeod was acquitted on all charges after providing a solid alibi for the night of the Caroline affair.