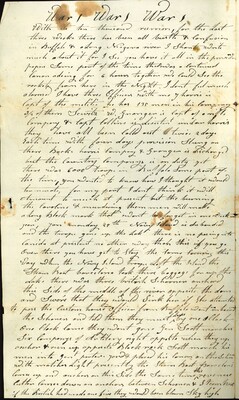 Just 23 years after the War of 1812 ended, Canada and the United States were brought to the brink of war once again.   The  diplomatic crisis was caused by events in Niagara after William Lyon Mackenzie's failed rebellion in Upper Canada in 1837.   Mackenzie had retreated with his supporters to Navy Island in the Niagara River.   The events that followed were to have a lasting impact on the Niagara community, and put an enormous strain on an already tense relationship with the United States.

Andrew Relph of Buffalo referred to the crisis in a letter dated January 22, 1838, writing "War, War, War, with its ten thousand rumors for the past three weeks there has been all bustle and confusion in Buffalo & along [the] Niagara River".

The following years along the Niagara border would prove to be volatile and unstable.  Although the relationship between Canada and the United States was compromised in the short-term, the countries were eventually able to resolve their differences and emerged stronger.