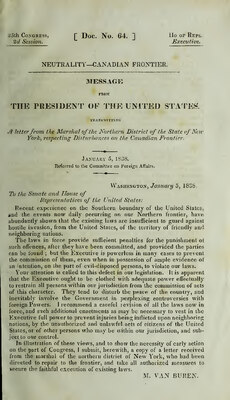 Message from U.S. President Van Buren on disturbances on the Canadian frontier, 1838. 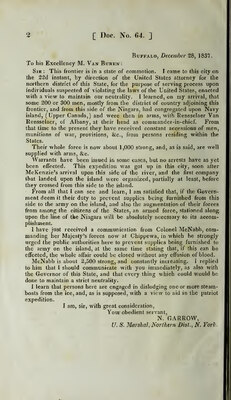 A letter from the Marshal of the Northern District of the State of New York.  The letter concerns American involvement in events on Navy Island,  December 28, 1837

Instability continued along the Canada-U.S. border in Niagara throughout 1838.  Another raid by the rebels occurred at Short Hills in June.  James Morreau, one of the rebel leaders involved with this raid, was executed for his role by the Sheriff of Niagara District, Upper Canada.

American President Martin Van Buren acknowledged the inadequacy of American neutrality laws with respect to the Canadian frontier.  In a message dated January 5, 1838, he noted that:

"events now daily occurring on our Northern frontier, have abundantly shown that the existing laws are insufficient to guard against hostile invasion, from the United States, of the territory of friendly and neighboring nations.  The laws in force provide sufficient penalties for the punishment of such offences, after they have been committed...but the Executive is powerless in many cases to prevent the commission of them, even when in possession of ample evidence of an intention."

The President relayed a letter transmitted to him from the U.S. Marshal in New York dispatched to report on the rebel situation.  He reported that Col. McNab of Her Majesty's forces at Chippewa strongly urged that supplies be prevented from reaching the rebels on Navy Island, and that if this could be accomplished, the whole affair may be closed without any bloodshed.  The U.S. Marshal communicated to McNab that everything in their power would be done to maintain a strict neutrality.

Resolutions passed by the House of Assembly on the subject of breach of neutrality and aggression, 1838 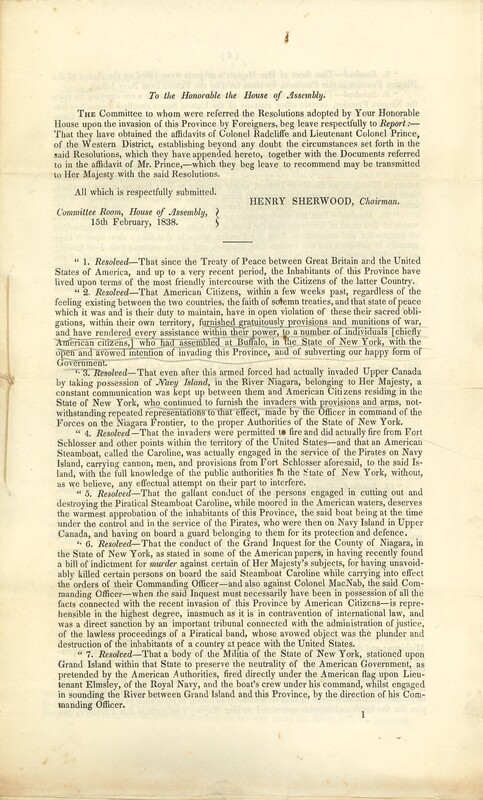 The first seven of fifteen Resolutions passed by the House of Assembly on the breach of neutrality, 1838