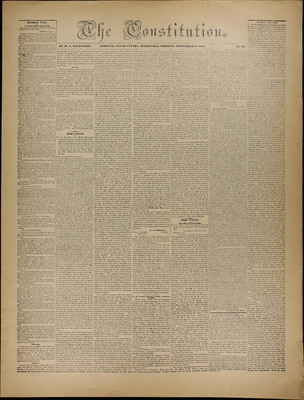 William Lyon Mackenzie (1795-1861) was a politician and newspaper publisher who was a vocal critic of the ruling Tory government and Family Compact (a network of elite business and government leaders).   He used his many newspapers as a platform to criticize these groups and advocate for reform.   Mackenzie admired the American system of government and wanted to adopt a similar system in Canada.

In his newspaper The Constitution, Makcenzie writes that "the Reformers throughout Upper Canada are the long established, independent farmers, of all origins.  The Tories are the shop-keepers and office-holders, who are surrounded by hosts of idle, greedy, worthless scoundrels who pass their lives in expectation of place, and stand ready to do their master's bidding".

Mackenzie was popular with many citizens and was elected to the House of Assembly for York County in 1828.    He was repeatedly expelled from the Assembly for his scathing attacks on his opponents.  Yet he remained popular with his constituents and was continually re-elected.  In 1834, he was elected the first mayor of Toronto, and later that year was again elected to the Assembly.   He lost the election in 1836 and became increasingly bitter and disillusioned. 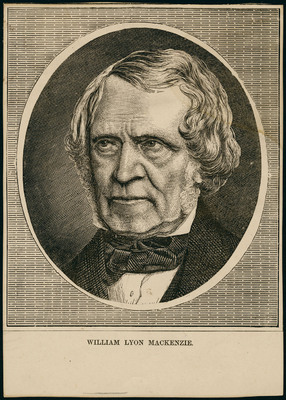 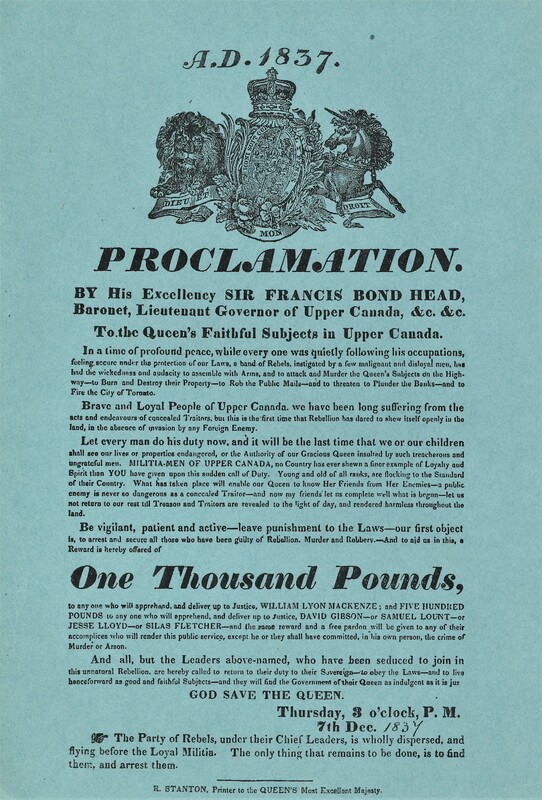 Proclamation by Sir Francis Bond Head, 1837.  He offers a reward for the apprehension of Mackenzie and others, December 7, 1837.

When his attempts at peaceful reform failed, Mackenzie became more aggressive in his approach.  He led a disorganized rebellion on December 5, 1837.  His plan was to lead a crowd of rebels towards Toronto to the house of Lieutenant-Governor Sir Francis Bond Head.  Loyalist guards fired at the rebels as they approached Toronto and the crowd dispersed.   On December 7, Sir Francis Bond Head, accompanied by loyalist troops, confronted and defeated the rebels at Montgomery's Tavern, just north of Toronto.   Mackenzie fled to the United States.  He attempted to continue the rebellion from Navy Island in the Niagara River, where he took up residence with 200 of his supporters. 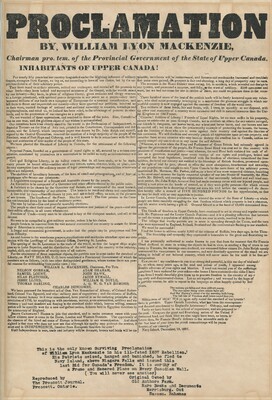