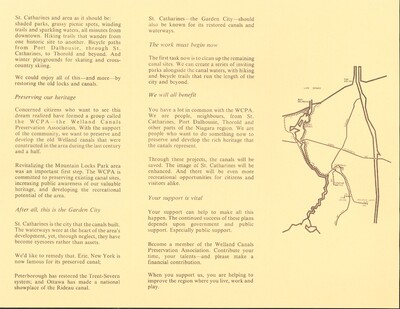 The Welland Canals Preservation Association (WCPA) was formed in 1977 by a group of citizens. It was recognized as a non-profit charitable organization in 1978.  The goals of the Association were to preserve the remnants of the Old Welland Canals, to increase public awareness of the old canals, and to encourage the development of these lands through a historic network that would beautify the land and provide residents with recreational facilities.  One of their early brochures notes that:

"St. Catharines is the city that the canals built.  The waterways were at the heart of the area's development, yet, through neglect, they have become eyesores rather than assets...With the support of the community, we want to preserve and develop the old Welland Canals that were constructed in the area during the last century and a half." 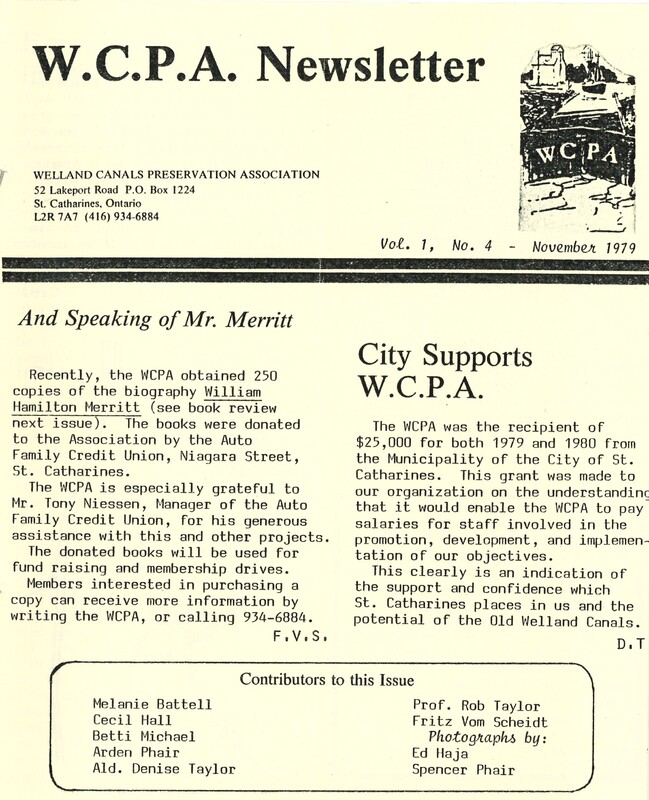 The WPCA has accomplished much since its inception.  They were successful in building a 28 mile hiking and biking trail from Port Dalhousie and Port Colborne; the building of parking lots at Oakdale, Westchester, and Glendale Avenues; the creation of signage and brochures to advertise the trails and local history; the building of a pavilion at Lock 7 Park in Port Colborne; a grandstand in Dain City; and the development of a park at the south end of the canal in Port Colborne.

The association also undertook the Lock 24 archeological dig and related park development, renovation of the Knife works (formerly the Belmar Welding building), and provision and storage of a tourist information booth for the St. Catharines Chamber of Commerce.  In 1988, the group worked alongside the Regional Municipality of Niagara and the municipalities to link canal communities.  The Welland Canals Preservation Association cleared debris and partially restored Lock 1 of the second canal at Port Dalhousie.  This was a community service project which was done in conjunction with the Correctional Institute in Thorold.

More information on the Association's work, including meeting minutes, clippings, and photographs, can be found in the Welland Canals Preservation Association fonds.