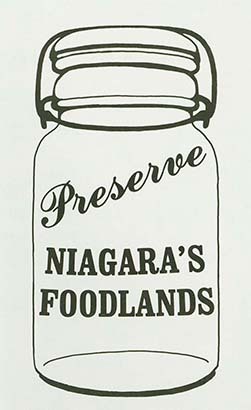 The Preservation of Agricultural Lands Society (PALS) was formed in 1976 by a group of individuals concerned about the future of Canada’s agricultural self-sufficiency.  Founding members included NDP MPP Mel Swart, Brock University Professor Bob Hoover, as well as Gracia Janes, John Bacher, and 26 others.  The non-profit, charitable organization is based in St. Catharines, Ontario.  PALS efforts have focused on land use within the Niagara region, although their activities and membership are not limited to the area.

The protection of the unique tender fruit and grape lands of the Niagara Peninsula has been the most pressing concern of PALS.  Urban development consistently threatened these lands.  PALS worked to educate the public and presented briefs to all levels of government in an attempt to bring awareness to the issue.  A lack of effective government action at any level from 1978-1980 prompted PALS to take the case for the land to two Ontario Municipal Board Hearings.  The decisions which resulted from these hearings (in Feb. 1980 and Feb. 1981) directed the Region of Niagara to redirect growth away from the tender fruit and grape lands and to consider the boundaries bordering on 52,000 acres of such land as permanent.

In 2001, these boundaries were breached when the Ontario Municipal Board approved the expansion of the urban boundary of Fonthill, involving 600 acres of tender fruit land.  This loss prompted the 2005 Greenbelt Act which determines areas within Southern Ontario that can and cannot be developed. 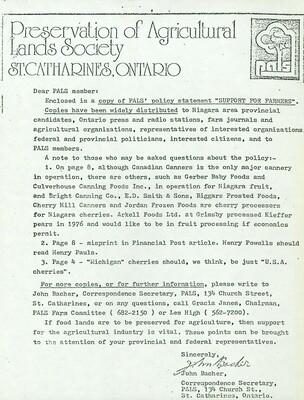 Cover letter for the Support for Farmers document, 1983

Another important aspect of PALS work, as stated in their charter, is promoting the farm industry by helping the farmer.  To this end, they produced a document, Support for Farmers:  Agricultural Support Policy (1983), informed by farmers who belonged to the organization and other experts. Some of the recommendations included the need for a reassessment of the tariff policy that had been in place since the 1930s; an opposition to the importation and promotion of foreign foods just prior to and during harvest here; more promotion of the use of local produce; and the adoption of a symbol to indicate Canadian, Provincial or locally grown produce.  This document was issued twice and widely distributed across Canada. 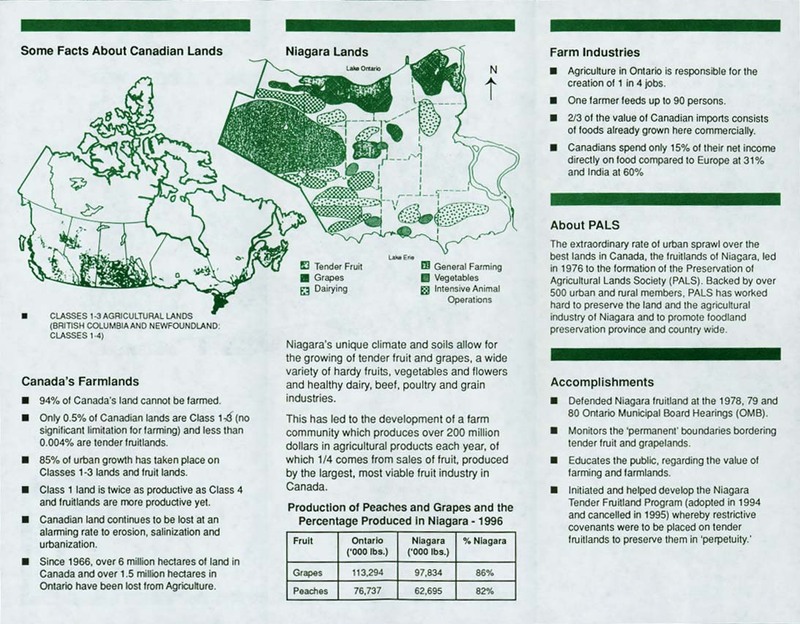 PALS has also been very active in the promotion and development of a voluntary land protection program that protects farmers and the farmland by compensating the farmer for restrictive covenants on land use.  This concept of land trusts was first investigated by PALS in the late 1980s, in response to difficult economic times faced by farmers.  PALS brought the director of the Maryland Farmland Preservation Programme to Niagara for a Land at Risk Conference and began promoting the concept to all levels of government and within the farm community.  The government established a Tender Fruit Lands Committee to investigate the use of what is now called easements.  In February of 1995, the Minister of Agriculture announced the enactment of the Niagara Tender Fruit Lands Program.  Over 60% of the tender fruit farmers applied and a committee was appointed to determine who should receive the money first for the restrictive covenants to be placed on their land.  The program experienced several delays for various reasons and was eventually scrapped when a new government was elected later that year.

PALS remains active and continues to press the government for a voluntary land protection program that uses restrictive covenants to save tender fruit and grape lands for future generations of farmers and urbanites.  More information on their activities can be found in the Preservation of Agricultural Lands fonds.