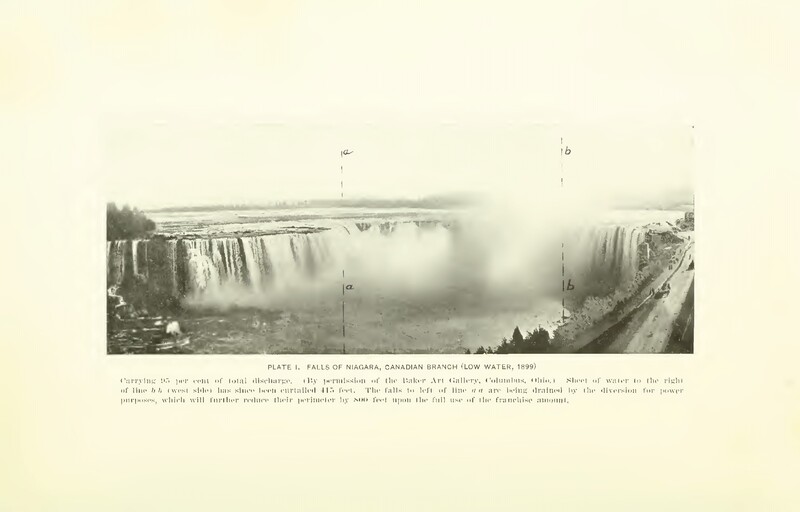 Horseshoe Falls showing the effects of water diversion for power generation, 1913.  The caption indicates that the sheet of water to the right of line "b" has been curtailed 415 feet.  The falls to the left of line "a" are being drained by the diversion for power purposes.  This will reduce their perimeter by 800 feet upon the full use of the franchise amount

Joseph William Winthrop Spencer (commonly known as J.W. Spencer) was a geologist and geomorphologist best known for his work on the geology of southern Ontario and the Great Lakes.  Spencer spent much of his life studying preglacial river valleys in Ontario and the origins of the Great Lakes, as well as the Niagara River and Falls.  In 1907, he published a book entitled The Falls of Niagara:  their evolution and varying relations to the Great Lakes.  His opinions in these areas differed from some of his contemporaries, namely the American geologist Grove Karl Gilbert. Gilbert published a review of The Falls of Niagara that exposed some flaws and inaccuracies in Spencer’s estimate of the age of the Falls. 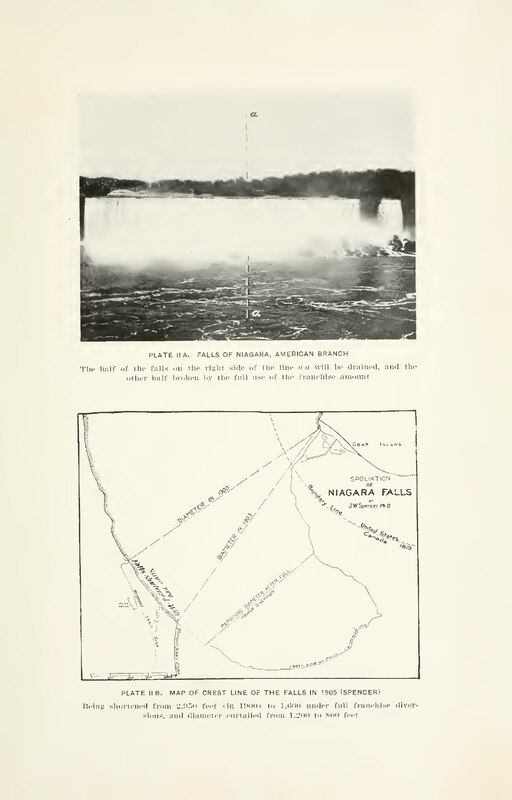 In his work on Niagara Falls, Spencer often examined the effects of water diversion for power generation.  In his publication Outline of the Evolution of the Falls of Niagara (1913), written for the International Geological Congress, he wrote that:

"When the total amount of water now allowed to be diverted shall have been used, the volume of the discharge over the Falls will be reduced to 68 percent of the natural amount...The effects of diversion may now be repeatedly seen during low water and prevailing ice conditions in winter, when the American Falls are broken into fragments, and the eastern side of the Canadian Falls runs dry.  When the total amount of water now permitted to be used shall be diverted, the crest of both falls will have been reduced from 3950 feet to 2100 feet; but in the future the Falls are destined to be destroyed by man."

The J.W. Spencer collection (1866-1921) contains correspondence, publications, and other material related to his work in Niagara and elsewhere.