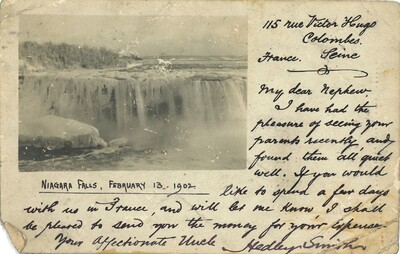 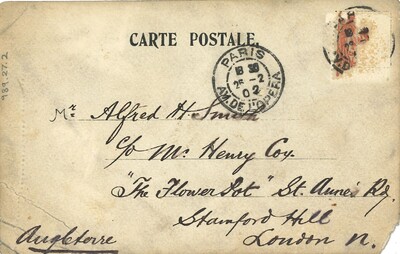 This postcard from Paris, featuring a photo of Niagara Falls in winter, is addressed to the writer's nephew in London.  He offers to pay his nephew's expenses should he come to visit him in France, 1902.

Postcards were a popular form of communication during the latter part of the 19th century.  Their popularity peaked around the turn of the century, from 1900 to 1915.  During this period, billions of postcards were mailed.

Postcards were a convenient alternative to the time-consuming task of writing letters and could often be sent for a lower fee.  Technological advances in photography, printing, and mass production made their widespread use possible.  Eventually, demand for postcards declined, especially as telephone usage increased.

Postcards have been described as the text messages and social media of their time.    They were used to communicate with friends and family while travelling, or simply to communicate family news or conduct business.  They have also been used as advertisements, to provide snapshots of daily life, and to commemorate special events.  Postcards provide valuable insight into life during their time.   This exhibit will provide a glimpse into some of the varied uses of postcards, with a focus on the following categories.