The Day the Falls Ran Dry

Occasionally, ice floes would accumulate where Lake Erie drains into the Niagara River, creating an ice dam that would block the flow of water and cause Niagara Falls to slow to a trickle.  Such an event happened on March 29, 1848.  For three days, the flow of water was substantially reduced.  Residents on both sides of the border were unsettled and feared the end was near, while tourists flocked to the area to witness the event for themselves.   As the river below the falls dried up, people would venture out on the riverbed, discovering lost items including weapons from the War of 1812.    The operators of the Maid of the Mist used the opportunity to dynamite rocks in the riverbed that were hazardous to their boats.    The phenomenon was short-lived.  During the night of March 31, the temperature rose and winds shifted, causing the ice dam to break apart.  Water once again flowed over the Falls. 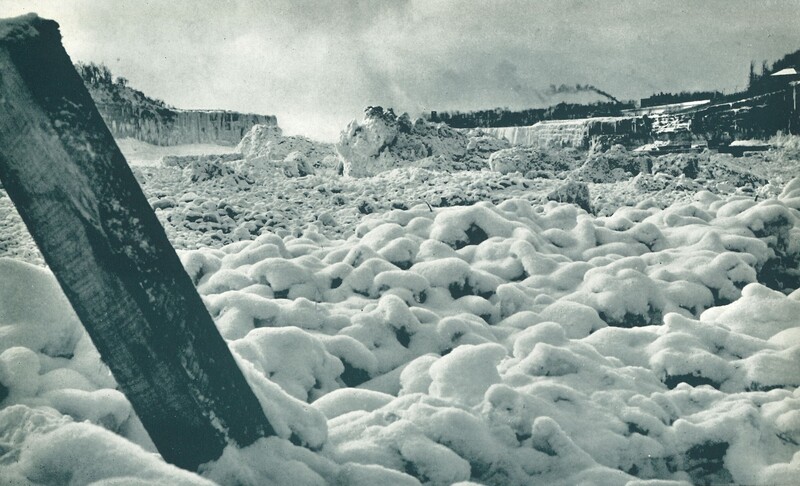 Ice jam in the Niagara River, looking towards the Horseshoe Falls, 1938.  The roof of the Ontario Power Generating Station can barely be seen in the gorge to the right of the Falls. 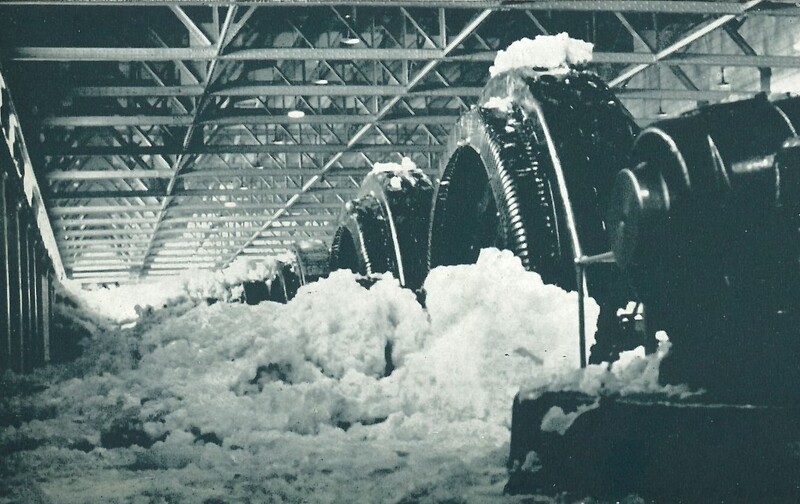 Ice in the Ontario Power Company plant, 1938.  It was estimated that 7000 tons of ice caused about a million dollars worth of damage.  The generators at the far end of the building are completely submerged.

Ice Jams of the Twentieth Century

Severe winter weather conditions in 1909 caused the American Falls to almost stop flowing.  People would (illegally) walk across the riverbed to the islands.  A local newspaper reported the ice in the lower river to be 50 feet high.  The Maids of the Mist were battered by the ice and all boathouses between Queenston and Niagara-on-the-Lake were destroyed.   Power in Niagara Falls and several other cities went out on April 9 when 18 feet of ice in the Ontario Power Company's plant forced its closure.

The ice jam of 1938 that caused the Falls View bridge to collapse also wreaked havoc on the Ontario Power Generating Station near the base of the Horseshoe Falls.  The plant became covered by mountains of ice, disabling the equipment.  A news report from the Niagara Falls Gazette on January 26, 1938 states that the plant "was forced to cease operations when ice piled up against its walls, entered the building, and threatened destruction of the machinery.  This afternoon ice mountains rose to within 15 feet of the top of the building.  Fear was held that the building would be crushed like an eggshell.  Meanwhile, entrance to the building was cut off when ice and water filled the elevator tunnels and it was feared that the costly machinery was a complete loss".

Another severe ice jam occurred in 1955.   Massive ice floes entered the Niagara River from Lake Erie, causing catastrophic damage to commercial docks, marinas, homes and churches.  People flocked to the area to witness the devastation.  Police were needed to patrol the region and keep onlookers from venturing onto the ice.   The use of dynamite was considered to break apart the ice, but it was determined that this would likely result  in damage to the area while potentially having little, if any, effect on the ice.     It was decided that the only course of action was to wait for weather conditions to improve and melt the ice.

The most recent severe ice jam happened in 1963.  The accumulation of ice in the Niagara River once again wreaked havoc on the shoreline.  American and Canadian icebreakers were used to break up the ice and allow water to flow again, especially near hydroelectric power plant intakes.  One icebreaker became lodged in an ice jam and had to be removed by a crane. 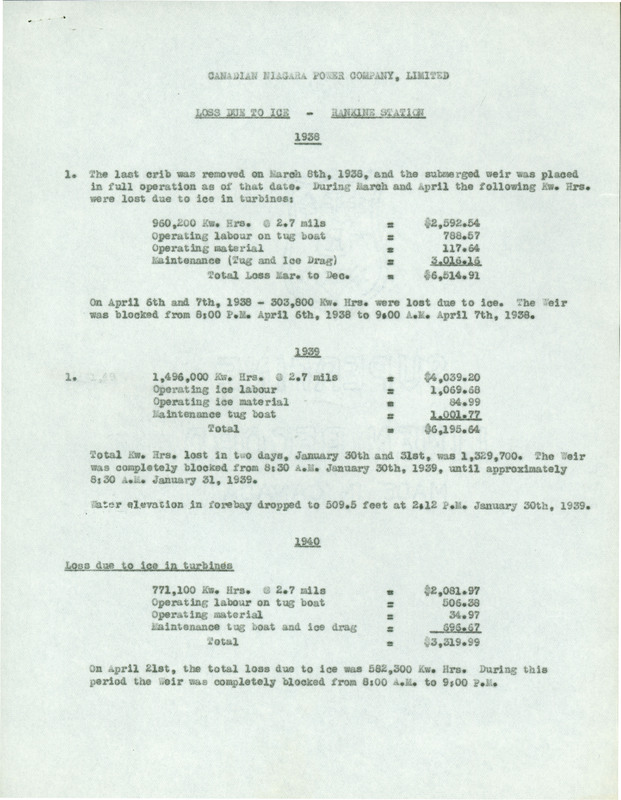 Report of loss due to ice at the Rankine Generating Station, 1938-1941.  The report includes the amount spent on tug boat operation and maintenance.  The total loss on this report is over $17,000.

Ice in the Niagara River proved be a significant problem for the hydroelectric generating stations.   Under extreme ice conditions, the equipment could be disabled.  But the ice would also reduce the water supply to their intakes, hampering the plant's ability to generate power.    Many power plants employed small tugs to break apart the ice.  When ramming the ice with the tug was ineffective, dynamite was used to break it apart.  There were times when even the dynamite did not help.

A development in 1964 finally solved the worst of the ice problems.  At this time, a joint project between Ontario Hydro and the New York Power Authority was implemented.  An ice boom was placed across the Niagara River where Lake Erie drains into the river.  This held back a significant amount of ice from entering the river.  It was removed in the spring when any ice loads that had not melted could be safely released into the river.  The project was so successful that it became an annual occurrence.  This has prevented massive ice jams from forming in the Niagara River.