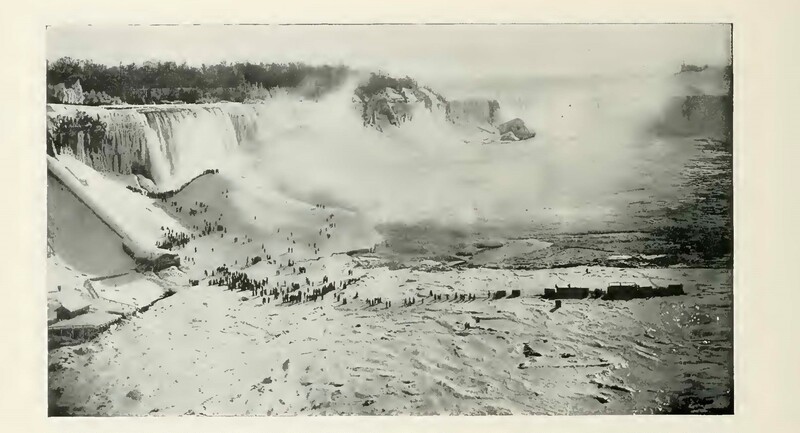 General view of Niagara Falls in winter from the Upper Steel Arch bridge.People can be seen crossing the ice bridge in the foreground. This photo is from Old and new views of Niagara Falls, 1901.

During the cold winter months, ice and slush from Lake Erie enter the Niagara River.  Some of this ice and slush drops over Niagara Falls, where it eventually gets forced into the Canadian bank just past the American Falls.  As more ice and slush accumulate at this spot the ice is pushed out of the water by the pressure and freezes in a large mass.  The ice continues to grow and eventually reaches the American shore, creating the ice bridge.   The size, appearance, and duration of the ice bridge largely depend on the weather conditions.

The ice bridge became a popular attraction for tourists.  People would descend the gorge and walk across the ice to take in the winter spectacle of the Falls from below.  Shanties were erected on the ice to provide refreshments and souvenirs.  Some shanties would illegally sell liquor but often managed to escape punishment by claiming they sold the liquor outside of the country laying the charge.  If Canadian officials laid charges, the vendor would claim he was selling in the United States.  The shifting ice conditions added credibility to this defence.

A 360 degree video of Niagara Falls and the ice bridge in 1903.  People can be seen crossing the rough terrain of the ice bridge.

A description of the ice bridge can be found in Picturesque Canada: the country as it was and is (1882):

Some winters the heavy masses of ice constantly coming over the cataract become firmly jammed together outside the basin, forming a bridge from shore to shore, sometimes extending far down the river.  Over this bridge tourists, sight-seers, and idlers of every description pass backwards and forwards, the roughness of the road, often broken and uneven in places, and thickly encrusted with frozen spray, giving a little difficulty and excitement to the passage, though the immense thickness of the ice-blocks so firmly wedged together make it for the time as safe as terra firma.  The view of the Falls from the ice is magnificent, but the ice-hills are a still greater attraction.  They are formed among the rocks at the foot of the American Fall by accumulations of frozen spray, rising layer above layer, till immense cones of ice, forty, sixty, even eighty feet high, are made.  All day long, boys in their small hand-sleds slide down these huge slopes, and sometimes, on moonlight nights, toboggan parties assemble and enjoy the exciting amusement, amidst romantic and picturesque surroundings nowhere else to be found. 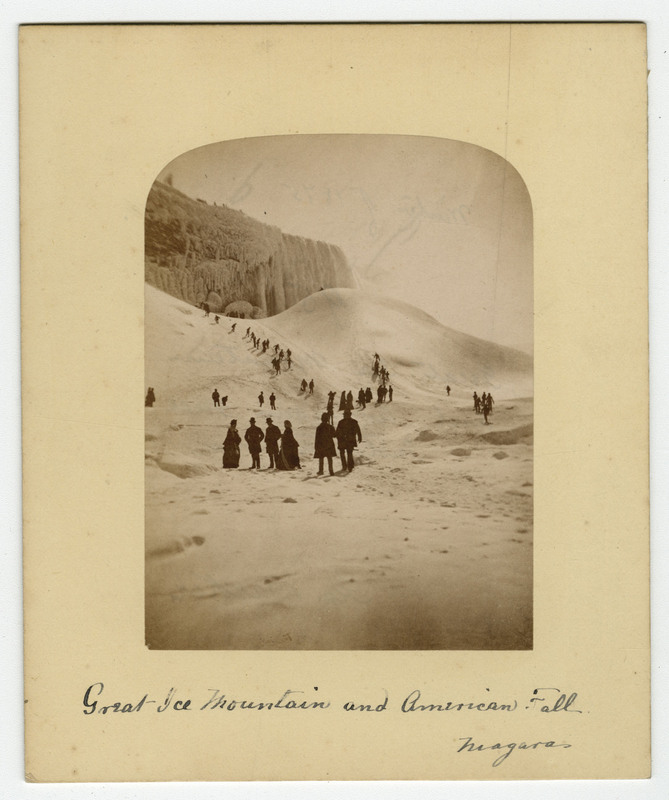 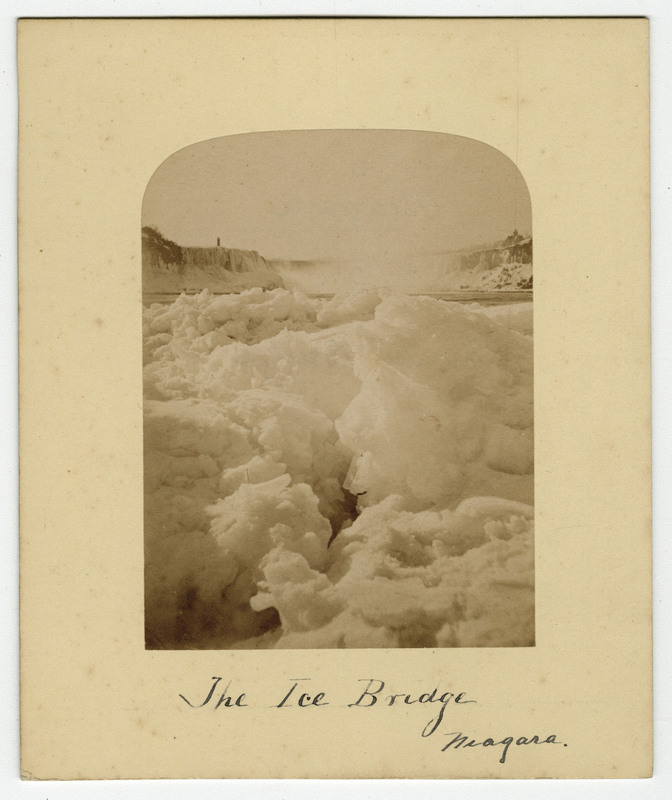 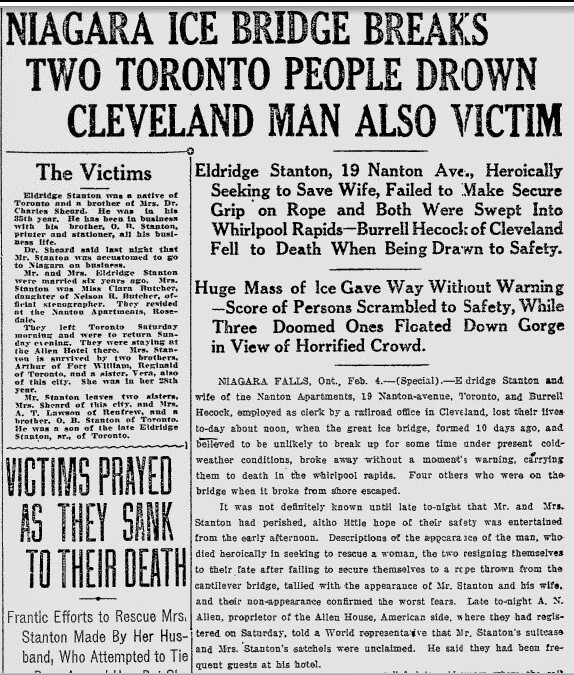 An article from Toronto World, reporting on the sudden break up of the Niagara ice bridge and death of three people, February 5, 1912.

The ice bridge remained a popular attraction until February 4, 1912.  On that day, the ice bridge unexpectedly broke apart while people were on it.   Suddenly, a tremour could be felt, accompanied by a loud noise.  Some of those on the ice recognized the danger and quickly ran for shore, shouting at others to do the same.

Eldridge Stanton and his wife Clara were Toronto residents who were visiting Niagara Falls that day.  As the ice began to break apart, the Stantons ran towards the American shore but were unable to make it before the ice broke apart and water appeared.  They turned back towards the Canadian shore.   Before they could make it to land, Clara stumbled and fell from exhaustion.  Her husband Eldridge called for help to get her to the shore.  Burrell Hecock, 17, of Cleveland heard the cries for help and ran towards them.  Before they could make it to shore, the gap between the ice and the shore widened stranding them on the ice.

The ice began to float downstream towards the rapids, breaking apart along the way.  Rescue workers lowered ropes from the bridges spanning the gorge in an attempt to save the Stantons and Hecock.  Hecock was able to grab one of the ropes but lost his grip and fell into the river.  The Stantons remained on the ice but were thrown off by a large wave in the rapids.  All three died as a result.  After this incident, it became illegal to walk on the ice bridge.