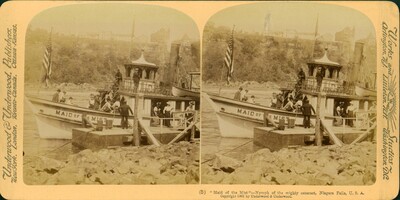 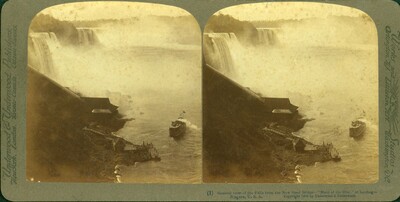 Maid of the Mist

The Maid of the Mist boat tours have been operating since around the mid 1850s.  Passengers embark from the American shore and are taken to the base of Niagara Falls.  Stephens Baker described his experience on the Maid of the Mist when he travelled to Niagara Falls in 1848.  He wrote that he "went on board the steamer 'Maid of the Mist' and passed within two knots of the highest Falls, the boat trembled exceedingly from the effect of the fall of water, and the spray was thrown over us so as very much to alarm some of the female passengers.  It is impossible to describe the effect produced on the mind by this greatest of natural curiousities.  It was truly magnificent". 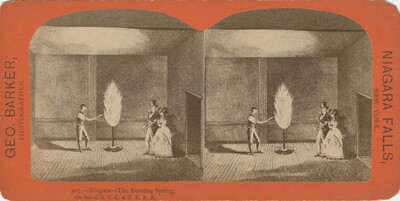 The Burning Spring was a tourist attraction located on the Canadian side of the Niagara River, above the Horseshoe Falls.  A natural gas leak in this area was harnessed to make an attraction by attaching a barrel with a corked pipe to the area.  When the cork was removed from the pipe, the natural gas was emitted and ignited, creating the "burning spring". 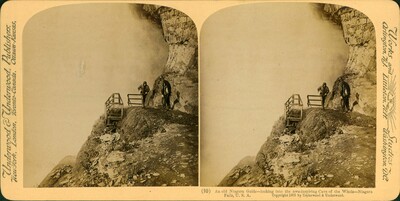 Cave of the Winds

A natural cave behind the Bridal Veil Falls was discovered in 1834.  Guided tours of the area began in 1841, using a staircase that descended into the gorge.  A rockfall in the 1900s destroyed the overhang which formed the cave and allowed people to stand under the Falls.  Further rockfalls and dynamiting removed much of the original cave and structure.    A series of decks and platforms were built in this area to provide a view of the base of the Falls, which remains a tourist attraction. 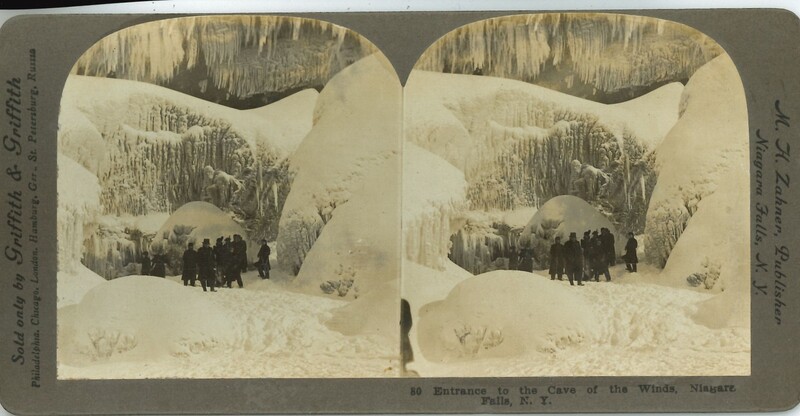 Entrance to Cave of the Winds in winter