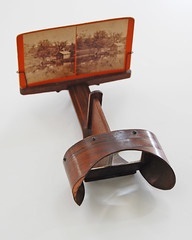 Stereoscopes are a device through which two nearly identical images can be viewed through a lens to create a three-dimensional image.  They were popular from the 1850s to the 1930s as home entertainment devices.  The stereo cards viewed in the stereoscope often depicted famous tourist destinations.   Most commonly the images were printed on card mounts, although daguerrotypes and glass negatives were also used.

This exhibit showcases stereo cards from the Brock University Archives featuring Niagara Falls and the Niagara River, including the whirlpool, rapids, observation points, and bridges.  Some related tourist attractions are also included.