Results of the Investigation 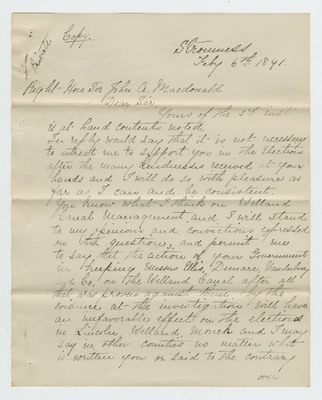 Letter from McCallum to MacDonald after the investigation, 1891

The investigation ended with William Ellis remaining as Superintendent of the Welland Canal.  Ellis' attorney had argued that McCallum was focused on insignifcant charges and private grievances which were not related to the management of the canal. McCallum was unhappy with the results of the investigation, and warned McDonald that this would likely have an unfavourable effect on the elections in Lincoln, Welland and Monck.  He urged MacDonald to remove Ellis and others from the canal before the elections get "hot".

He brought the matter up in the Senate in March, 1893, where he continued to press the government on what action (if any) they were planning to take upon the evidence taken at the investigation.  McCallum was assured that the Minister responsible for canals was looking into the matter with a view to making changes such as reducing the staff and the expense of operating the canal.  McCallum remained dissatisfied with the outcome of the investigation and lack of action on the part of the government.