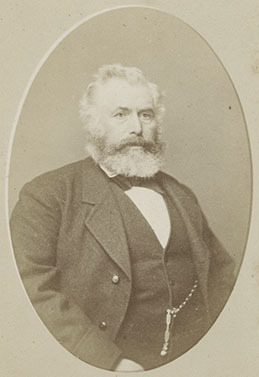 Lachlan McCallum (1823-1903) was a Canadian politician who served as a Member of Parliament and Senator.   He represented Monck, which was comprised of certain townships from Welland, Lincoln, and Haldimand Counties.  Prior to his career in politics, McCallum was a businessman who built vessels for the Lakes and used them for a freight carrying business.  He also founded, and was Captain of, the Dunnville Naval Brigade.  In these capacities, he was involved in defending against the Fenian attack on Fort Erie in June, 1866.

McCallum served in the House of Commons from 1874 to 1887.   At that time, he was appointed to the Senate by Prime Minister John A. MacDonald.    During his political career, McCallum was a vocal advocate for the enlargement of the canals, the building of an all-Canadian railway, and a supporter of the National Policy.  This exhibit will explore some of the highlights of McCallum's life and some of the political issues of the time, as discussed in a series of correspondence between McCallum and Prime Minister John A. MacDonald.