A Century of Achievements 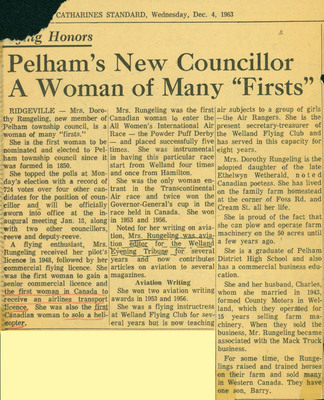 Article "Pelham's New Councillor a Woman of Many 'Firsts'", 1963

Being first for Dorothy was nothing new, and in 1963 she managed to be first yet again.   Rungeling had decided to run for Pelham town council and accomplished this goal by being the first woman nominated and elected to the Pelham township council. 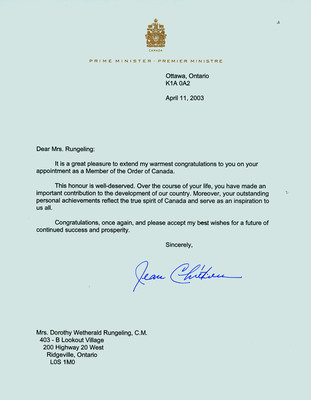 After decades of successes and astounding achievements in aviation, Dorothy Rungeling was honoured with the Order of Canada in 2003.  She received letters from Governor General, Adrienne Clarkson, and Prime Minister Jean Chrétien.  The public admiration and  acknowledgements did not end there for Dorothy.   In May 2010, Dorothy was honoured with a stamp by Canada Post to commemorate her achievement as the first woman to solo a helicopter.  This tribute was made possible by the Ninety-Nines, an international organization devoted to women pilots, a group that Dorothy had been a member of since her early days as a pilot.  The stamp was released, appropriately, on Dorothy's ninety-ninth birthday. 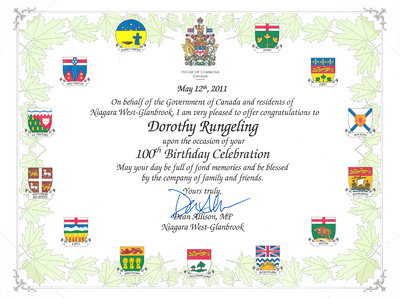 Now over a hundred years old, Dorothy was still highly regarded and in 2015, at the age of 104, Dorothy was yet again recognized for her accomplishments, this time in her hometown.  The Niagara Central Airport successfully changed its name to The Dorothy Rungeling Airport.  Dorothy was highly regarded throughout her life because of the challenges she was always ready to conquer.  She said it best in her book It's Fun to Grow Old! (2002):

"Having a goal to strive for is perhaps one of the answers on how to live long.  Haven't you found that if you are doing something you are really interested in, you lose track of time?  Who knows, maybe time does stand still then.  Perhaps people who work toward a goal are the people who enjoy life to the fullest and live the longest.  They are working on something that just cannot be left, and so they live on.  A challenge was there - they had to meet it."