Memories of the Canada Games

Canada Games Collection Researchers invited the public to share photos and memories regarding their Canada Games experiences. Here are a few special memories from people of all ages, across Canada. You can also contribute to this crowd-sourced collection by clicking here. 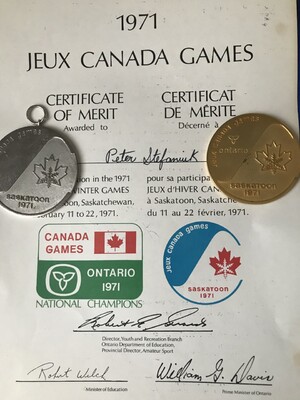 Item: Memories from the 1993 Canada Summer Games in Kamloops, BC.

I got my first camera in 1969 for my 12th Birthday. I took the attached photos of the athletes parade and the dignitaries. I was thrilled to see Canada’s Prime Minister (Pierre Elliott Trudeau). It was like seeing a movie star! We attended a number of events. I particularly recall Field Hockey and Lacrosse-two sports I had never seen before. They caught my interest and I went on to play both sports during my high school and university years. I remember the excitement around the Games and how special it was to be the host City. We were so excited to be part of the Games as spectators, and in events surrounding the games.

Photos from the 1969 Canada Summer Games in Halifax & Dartmouth, NS.

"The paintings of Discus and jumping were done by my sister and I. They were on the construction fencing around a new hospital building being built. School children were given a panel with a Games sport name on it and asked to paint their idea of the particular sport. I believe there were prizes awarded for outstanding work."

The following items from the 1971 Canada Winter Games in Saskatoon, SK were contributed by Peter Stefaniuk of Ontario. His men's volleyball team earned a silver medal at these Games. Their team continues to keep in contact, even sharing a special reunion dinner a few years ago.

Two medals and a Certificate of Merit from the 1971 Canada Winter Games in Saskatoon, SK.

The 1993 Canada Summer Games in Kamloops, BC.

"During the opening ceremonies the crowd was directed to look to the hills.... we were facing East so had to turn our heads to the left. I still have a vivid memory of the horses and riders high on the hills, the sun and blue sky, and then the cry of the riders as they swooped down the hills amid the sagebrush and amid the cries of wonder and appreciation from the crowds of spectators and provincial contestants. Of course the spectators rose in their seats and there was a great roar in acknowledgment of that precious moment in time! I also experienced such pride in my city of Kamloops and my province of BC as well as great appreciation for Canada. That visual and auditory experience will always be part of my memories. And to add to my joy, my parents had traveled from Vancouver to join us, my two sons were home for the games, my youngest son was part of the field entertainment, my brother-in-law was in charge of the Alberta contingent, and on that day, my life could never be better than that. Following the opening games, innumerable friends from across Canada and the USA, even Australia, phoned to say that they didn't know we lived in such a beautiful city."

Photos and Medals from the 2017 Canada Summer Games in Winnipeg, MB.

"This means accomplishment. I worked hard, trained hard, overcame pain; well worth the sacrifice, made so many friends, and the memories will last a lifetime. This was truly an amazing experience. I have to say when I was wrestling there was a match, the drums were beating ... the crowd was chanting my name! It was a feeling I cannot describe."