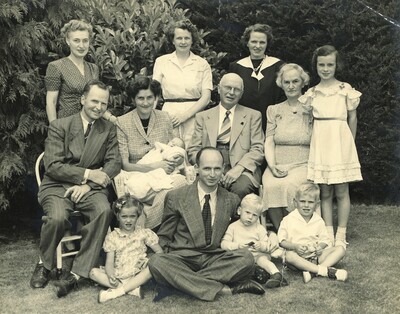 The Gibson family gathers in the garden at the family home in Victoria to celebrate the baptism of baby Ian Gibson, July 1949

James Alexander Gibson was born in Ottawa on January 29, 1912 to John W. and Belle Gibson.  Soon after the family moved to Victoria, B.C. where John W. Gibson was a director of the Elementary Agricultural Education Branch, Department of Education.

He received his early education in Victoria, obtaining a B.A. (honours) at the University of British Columbia in 1930.  He was awarded the Rhodes scholarship for 1931, one of the youngest Canadians to receive this honour.  At New College, Oxford, he obtained a B.A., M.A, B. Litt and a D. Phil.   This was to be the beginning of a long and dedicated relationship with the Rhodes Scholar Association.

Upon his return to Canada, Dr. Gibson lectured in Economics and Government at the University of British Columbia.  In 1938 he married Caroline Stein of Philadelphia and they settled into life in Ottawa.  The couple had three children: Julia, Eleanor Sue and Peter. 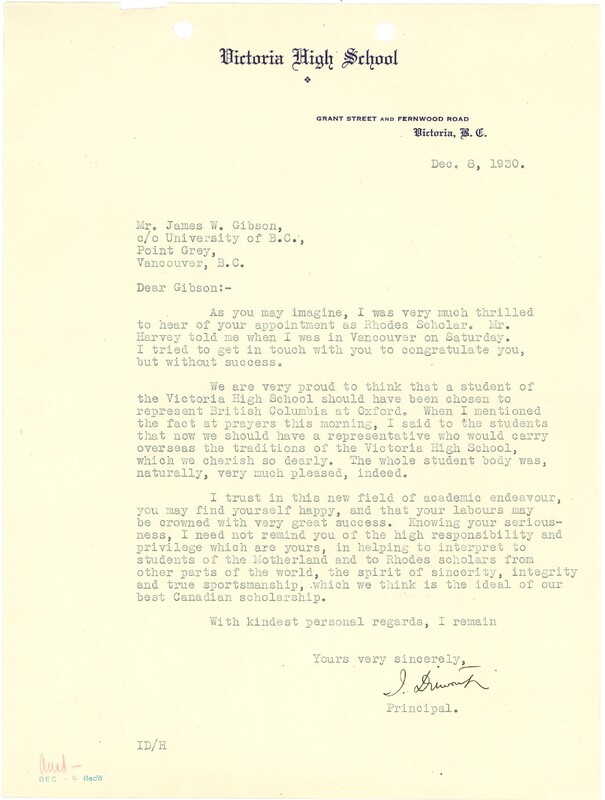 A congratulatory letter written by the principal of Victoria High School.

James A. Gibson received this congratulatory letter in 1930 when word spread throughout British Columbia that he had been selected as a recipient of the Rhodes scholarship.   He was one of the youngest recipients of this honour at that time.   This letter represents the numerous items of correspondence Gibson received.

In the ninth grade at Victoria High School, the history teacher said to me, “I can see you will never be a historian”, Gibson said.  I wasn’t angry, but I became determined.

A news clipping, likely from a local Victoria, BC newspaper,  announcing the awarding of Doctor of Philosophy degree from Oxford.

The future is so bright…

It is announced that Dr. James A. Gibson has been awarded the doctor of philosophy degree from Oxford University as well as his future plans of entering into government service with the Department of External Affairs in Ottawa.