Terrorism at the Monument

On Good Friday, April 17, 1840,  Brock's Monument was blown up. People made the assumption that the Americans were responsible for the damage, but this was not the case. The man responsible was said to have been Benjamin Lett, although this was never confirmed.  He was known as the Rob Roy of Upper Canada.

Benjamin was born in Ireland to parents who were supporters of the British Government.  He moved to Canada where he was an associate of William Lyon Mackenzie. He was purported to have taken part in the 1837 Rebellion. Lett harboured a violent opposition to Britain and colonial rule in Upper Canada. It was said that his family had suffered terribly at the hands of British soldiers. His terrorism did not begin with the monument. In 1838, he murdered Edgeworh Ussher in Chippawa. Ussher had been the pilot of the crew that destroyed the "Caroline". Lett unsuccessfully tried to burn all the ships in Kingston Harbour in 1839. He tried to kill another man who had been involved in the burning of the "Caroline" and then he was captured in the United States for Ussher's murder. Brock's Monument might have been spared, but Lett escaped.

On that Good Friday in 1840, he placed a keg of gunpowder under the steps in the monument.  He detonated the keg, but it exploded a little sooner than he expected. Stones rained down and almost killed him.  Damage to the monument was extensive.  The shaft was completely cracked.  Half of the parapet and roof were blown off.  Lett was later captured when he tried to blow up the Canadian steamship called "Great Britain". Once again, Lett escaped. In his spree of terror, Lett was also blamed for bombing the aqueduct on the Welland Canal.

Finally, he was captured, charged with the murder of Ussher, and put in solitary confinement.  This took a toll on his health and he was pardoned in 1845. He met his death in 1858 when somebody poisoned him with strychnine. The man who supposedly poisoned him was never charged.

This is an artist's depiction of Benjamin Lett based on descriptions of him. He was said to be about 25 years old at the time with a slim build, sandy hair, light skin, freckles, and blue eyes. His hands were large and muscular. 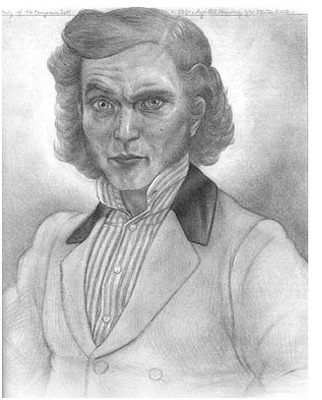 It was reported by onlookers that the bodies of Brock and Macdonell were removed from the first monument by workmen who treated the bones with no respect. They shoveled up the bones, dust, and dirt and tossed these into two plain pine boxes.

The bodies of Brock and Macdonell were transferred to the Hamilton Family Burial Grounds at Niagara Parkway and Dee Road in Queenston. This was their third resting place where they remained for years.  Damage to the monument was extensive, but the monument continued to stand for the next thirteen years. 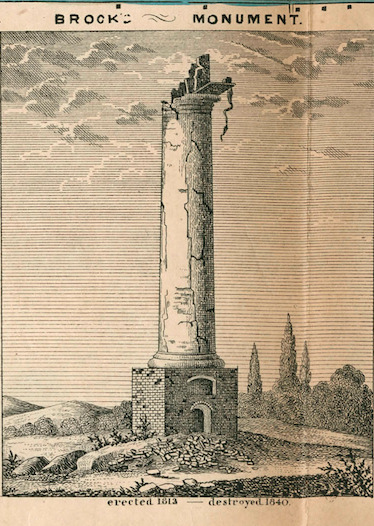