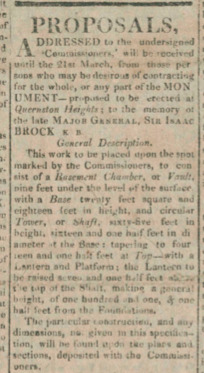 The people of Upper Canada wanted to honour Brock.  So on March 14, 1815, Parliament passed an act to erect a monument that would honour the General. Francis Hall was chosen to be the designer. The Brock family had requested that sculptor Richard Westmacott design the monument. He had designed a monument to honour Brock at Saint Paul's Cathedral in London. The committee did not choose Westmacott's version of the statue, possibly because the price was too high. 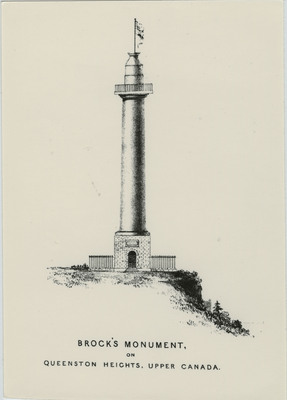 In Feburary of 1824, engineer Francis Hall posted a proposal for work on the Brock Monument. The various segments of work that were proposed were: foundations, bases, shafts, lantern, mortar, carpenter works, iron works and plaster work. His general description of the proposed monument included: a chamber or vault which would be nine feet under the surface and thirty feet square at the top and bottom, a base of twenty feet square and eighteen feet high, a circular tower or shaft which would be sixty-five feet high and sixteen and a half feet in diameter, tapering to fourteen and a half feet at the top. On the top would be a lantern and a platform. Proposals were to be accepted until March 21, 1824 and sent to Commissioners Thomas Dickson, Thomas Clark and Robert Nichol.

The monument was not completed by the time of the inauguration in October 1824. There was no inscription and the observation deck was not installed. Hall requested that he be allowed to finish the work, but the request was not granted.