Brock  University students posing with a part of Brock's Monument 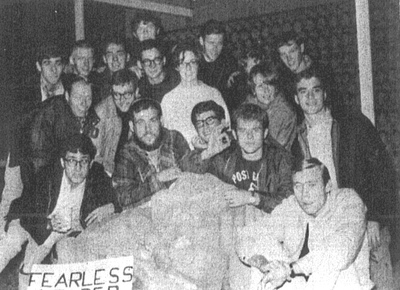 In 1965, a very curious event took place.  A limestone replica of Brock's shoulder including the epaulet and chest medal appeared on the lawn of Brock University. This was not at the current site of Brock University, but the former refrigeration factory on Glenridge Avenue at the bottom of the escarpment that served as the university's original campus.

James A. Gibson was university president at the time and he was not impressed. This was a part of the Brock Monument that had been struck by lightning in 1929. It had been broken off and stored at the base of the column at Queenston Heights. Some enterprising students found the shoulder and transported the heavy item to the university.

President Gibson returned the stone to the Niagara Parks Commission. In 1973, the stone once again found its way to Brock University. It was sent as a tribute to all of those who had donated to the University's Founding Fund. A plaque was put on the stone to mark the occasion. C. Bruce Hill, general chairman of the fund unveiled the plaque which was placed on the stone. Brock's shoulder was originally kept in the Founders' Court in the Mackenzie Chown Complex. Later, the stone was moved to Jubilee Court on the university grounds. Brock's shoulder is currently in safe storage indoors at Brock University. It was thought that the weather conditions might adversely affect the stone. 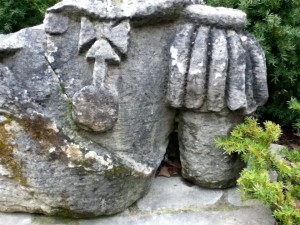